Brookhaven Facilities at the Frontiers of Science…and Art

Steve Miller is no ordinary artist. One can find brushstrokes, depictions of x-rays -- even the handwritten notes of a scientist -- all on just one of his canvases. Miller’s art exemplifies how Brookhaven’s impressive facilities can provide valuable knowledge for some, and profound artistic inspiration for others. Both the Relativistic Heavy Ion Collider (RHIC) and the National Synchrotron Light Source (NSLS) have played major roles in his artwork during the last decade. 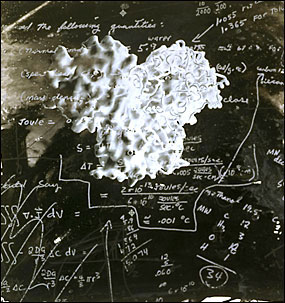 Miller has even included the personal notes of Nobel Prize-winning scientist Rod MacKinnon in his artwork.

“What interests me about images -- all images -- is that different communities make images for specific purposes and understand and use them differently, depending on their need, knowledge, and perspective,” Miller said.

Speaking of the dual utility images from Brookhaven Lab can deliver to both scientists and artists, he remarked that “in an art context, images that were literal and useful to some became abstract, and useful in another way to others.”

Miller has no formal science background, but the topics of leading scientific research—and the kind of advanced imagery they produce — have long been objects of his curiosity and fascination. The integration of technology into his creative process began in the early 1980s, when computers first enabled the manipulation and translation of images into a new digital language.

Later that decade, Miller started looking in medical textbooks for pictures of viruses, cancer cells, and the basic units of life. The electron microscopes used to study these tiny molecular structures have enabled scientists to examine our world at the smallest scales, even though the imagery these powerful instruments produce is abstract and inaccessible to most people, according to Miller.

“All of a sudden, I realized there was a whole other world that couldn’t be seen by the eye but could be visualized through new technology,” Miller said. “And the content of the images was really powerful, even if not very directly, at first, for a lay viewer.”

Steve Miller first visited Brookhaven in 2000 at the invitation of former Laboratory Director John Marburger. He spent the next few years collaborating with Steve Adler at RHIC, incorporating data gathered from the near-light speed collision of heavy gold ions into his next body of work, “Neolithic Quark.”

For this exhibit, Miller blended imagery of Neolithic Chinese pottery with data collected from RHIC. The ancient pottery — early products of emerging human civilization — was placed alongside current scientific research on the states of matter that existed in the very first moments of the universe. Although the relative crudeness of the pottery contrasts with the precision of Brookhaven’s particle accelerator, Miller believes that both represent society’s efforts to study and manipulate matter. 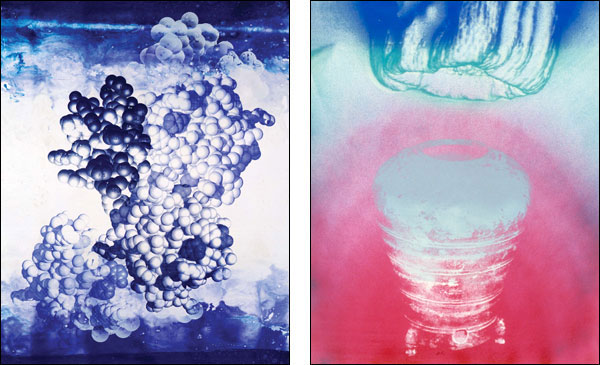 Miller then approached Brookhaven biologist Bob Sweet, who gave him a chance to explore the x-ray imaging capabilities of the NSLS and who eventually led him to Rod MacKinnon. MacKinnon, now a professor of molecular neurobiology and biophysics at Rockefeller University, was later awarded the Nobel Prize in Chemistry in 2003 for his breakthrough research on the movement of potassium ions through cell membranes. He conducted much of his prize-winning research at the NSLS.

“The 3-D models of human protein had so many different and spatially rich visual forms,” Miller said. “From the x-ray diffraction grating patterns, the computer can generate surface, mesh, bubble, ribbon, and ball and stick images. Using them in different combinations presented an unlimited number of possibilities for new creations.”

Not only was Miller inspired by the subject of MacKinnon’s work and the accompanying images, he actually included the Nobel laureate’s handwritten notes in his drawings and paintings.

“What I like about the notebooks is that they are written by hand and you can feel the pressure of the pen on the page,” Miller said. “All that text is a record of touch; it’s about human presence, which I like in the midst of all this technical imagery and information.”

The result of Miller’s collaboration with MacKinnon was “Spiraling Inward,” a collection that combined images of proteins and molecules, computer readouts, and MacKinnon’s personal notes. The exhibit relied heavily on the advanced x-ray instrumentation at the NSLS and was on display in the Rose Art Museum at Brandeis University in the fall of 2007.

The frontiers of molecular biology and particle physics are addressing fundamental questions about the composition and nature of the universe and its life. According to Miller, artists often grapple with these questions in their work as much as scientists do in their research.

“We’re all asking questions, trying to understand what forces make or shape who we are,” Miller said. “Lots of people talk about that as being the job and goal of both art and science.”

Miller thinks that emerging technologies will not only continue to expand our understanding of the universe at the most fundamental levels in the scientific realm, but also offer new outlets for creative expression in the artistic domain.

“Both disciplines are interested in the augmentation of their senses,” he said. “Innovative tools are a great way to discover new images that the human senses cannot perceive without this technological augmentation.”

For more images of science and art in collision, visit Steve Miller’s homepage.