“Striving Towards Energy Sustainability: How Will Plants Play a Role in Our Future?” 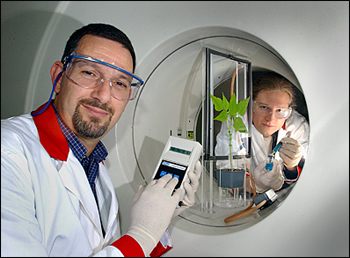 The same technologies used to study chemical responses in the brains of human drug addicts are now being employed to study how certain hormones move through plants — with hopes of improving renewable biofuels that could power our cars and trucks.

Scientists at Brookhaven National Laboratory are using radiotracers and positron emission tomography (PET imaging), a technique also used for addiction research, to understand how plant parts, such as leaves and roots, communicate with each other and respond to changes in their environment. By uncovering new plant signaling networks, these scientists hope to develop ways to optimize plant biomass, which would lead to more plant sugars that could be converted into renewable, sustainable biofuels.

On Wednesday, October 28, join Richard Ferrieri of the Medical Department, who will give the 453rd Brookhaven Lecture, titled “Striving Towards Energy Sustainability: How Will Plants Play a Role in Our Future?” All are invited to attend this free talk, which is open to the public and will be held in Berkner Hall at 4 p.m. Refreshments will be offered before and after the lecture. Visitors to the Lab 16 and older must carry a photo ID while on site.

During his lecture, Ferrieri will discuss biomass as a renewable energy source, how radiotracers and nuclear imaging are providing new ways to see plant processes, and new insights on controlling plant biomass.

Ferrieri earned a Ph.D. in nuclear and radiochemistry from Texas A&M University in 1978. He arrived at Brookhaven Lab’s Chemistry Department as a research assistant in 1979 and rose through the ranks to his current title of Senior Scientist. He also worked as a visiting scientist in the Chemistry Department at the University of California at Berkeley in 1986 and 1987.

In addition to his ongoing research at Brookhaven Lab, Ferrieri is currently the Site Director for DOE’s Nuclear and Radiochemistry Summer School, and an adjunct faculty member at the University of Missouri. He has also won numerous awards and holds five U.S. patents.