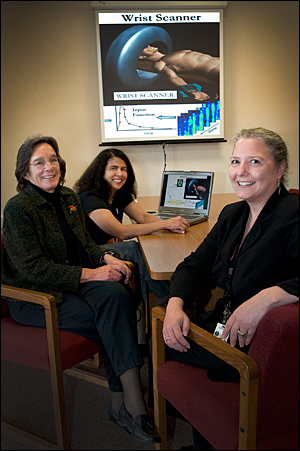 “With input from the BNL Directorates, we choose technologies for maturation that enhance the value of the Lab’s intellectual property,” said Christine Brakel, a licensing specialist in the Office of Technology Commercialization and Partnerships (TCP). “The goal of the maturation effort is to put the technology in a better position to transfer to industry.”

An industrial partner is not required for submission of a proposal under the Technology Maturation Program. TCP makes award decisions based upon evaluation of projects that are funded in the amount of $50,000 or less. For projects that are funded beyond that amount, a committee of associate laboratory directors and department chairs makes the funding decision based on presentations given by the principal investigator, who provides technical details about the project, and a TCP member, who makes a business case for it. In FY2009, five projects were funded by the program for a total amount of $360,000. They are:

Cui has envisioned a new, simplified design for stacks of thin detectors made of cadmium zinc telluride, which will be used to detect gamma rays in positron emission tomography (PET) scanners. He plans to develop detectors that can share electrodes between them, which would make this medical imaging technology more economical. Currently, an individual electrode is required for each detector to make electrical contact. Also, each electrode requires a readout channel – a chain of electronic circuits that process signals from the electrode.

“By gluing two detectors together to share the electrode, we can reduce the number of readout channels, which will reduce power consumption and cost,” said Cui.

With new technology, a portion of the 75 percent of waste heat from a combustion engine can be converted to electricity. Working on a project that was originally funded through a CRADA with General Motors, Li is developing advanced thermoelectric materials and modules that can perform this waste heat-to-electricity conversion.

Li is using environmentally friendly thermoelectric materials known as filled skutterudites to make a module that can be placed between a vehicle’s catalytic converter and muffler. He has developed a method to make the material in several minutes, rather than a week, the amount of time it would take using the standard method. He starts with the raw materials and uses a rapid solidification method to transform the materials into a nearly amorphous compound, shaped like ribbons. Then he uses a hot press to form the skutterite into a bulk crystalline material. Li is experimenting with different methods to perform the final, challenging next step: forming the material into a module.

“The goal is to make a demonstration module with optimal performance and low cost,” Li said. “If we can make an effective module with just a three percent rate of conversion, we can save 1.9 billion gallons of gas per year worldwide.”

To detect the spread of cancer, patients are injected with a radiotracer, usually 18F-fluorodeoxyglucose (FDG), which was developed by Brookhaven Lab researchers and collaborators. To accurately measure the rate that cells are using energy, samples of the patient’s blood are taken every 2 ½ seconds through an arterial puncture to measure the radiotracer concentration in the blood. A higher rate than normal means more sugar is being used by the tumor, and it is growing rapidly.

By using the new mini-PET camera developed by Schlyer and colleagues from BNL’s Instrumentation Department and Stony Brook University, taking blood is no longer necessary to determine a tumor’s energy consumption. The small device, made of a ring of miniature detectors, is worn around the wrist, and, when used with a mathematical model, is capable of quantifying the uptake of the radiotracer and the growth of cancer noninvasively.

“We are working on improving the sensitivity of the new device, which would be sold to hospitals and other medical facilities, along with a PET scanner,” Schlyer said.

In collaboration with the Instrumentation Division, the Physics Department and Stony Brook University, Smith and his team are designing a combined magnetic resonance imaging (MRI) and PET scanner to be used in small animal research. To do so, they have drawn on the technology of a BNL-patented invention called RatCAP, a miniature PET scanner designed to acquire 3D images of an awake animal’s brain. That device, while designed for another purpose, is so compact that it is able to fit and operate inside the bore of the Medical Department’s MicroMRI system, which has a useable area with a diameter of less than five inches.

“MRI and PET scans are complimentary technologies,” Smith said. “PET shows molecular function, so it can provide information on metabolic differences between normal and cancerous tissue, for instance, while MRI scans have much better spatial and contrast resolution for showing structural changes.

Yang is modifying radiation detectors made of cadmium zinc telluride to reduce the “edge effect.” Typically, these detectors have lower charge collection efficiency at their edges. This effect is ascribed to the change of the local electric field direction caused by extended defects near edges.

“The carriers are trapped by the side surfaces before reaching the collecting electrodes, resulting in a signal loss for interacting events near the edges,” Yang explained. “We are modifying the anode, changing the design of the detector array and providing shielding for the electrode to eliminate the problem.”

CZT detectors have many applications, including medical imaging, environmental monitoring, and national security, so that a more efficient detector of this type would be highly marketable. Yang is using beamline X27B at the National Synchrotron Light Source to test the novel electrodes he is developing for these detectors.

Look for an announcement in the Bulletin and BNL homepage requesting applications for new technology maturation projects in January 2010.