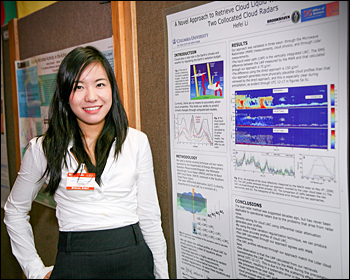 Contestants were judged on the quality of an abstract and poster of their research, and scholarships were awarded for the top three entries in six research categories: computational science, energy, engineering, environmental science, life sciences, and physical sciences, which includes physics, chemistry, and nanoscience. Additionally, one overall winner was chosen among the six category winners to receive a $10,000 scholarship.

The finalists were selected from student interns at DOE laboratories and DOE-sponsored universities across the country who conducted their research during the 2008-09 academic year and summer.

Brookhaven interns descended on Oak Ridge in impressive numbers -- 27 out of the 100 student finalists conducted their research at BNL.

Once they arrived, they did not disappoint.

Joseph Heard of Syracuse University and Erica Palma of Stony Brook University — both of whom conducted undergraduate research at BNL — placed in the top three in their respective categories, computational science and physical science. Their mentors were Yannis Semertzidis of the Physics Department and Oleg Gang of the Center for Functional Nanomaterials. 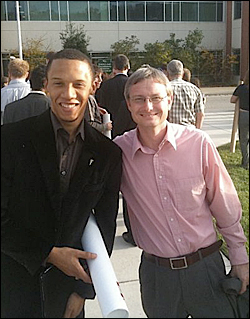 Sidney Hill arriving at Oak Ridge with David Hinks, who introduced him to his internship advisor at BNL, Jacob Hooker. Hill was awarded first place in physical sciences for his research in positron emission tomography.

Two other Brookhaven interns, Hefei Li of Columbia University and Sidney Hill of North Carolina State University, placed first in environmental science and physical science, respectively. They did their research with Dong Huang of the Environmental Sciences Department and Jacob Hooker of the Medical Department.

Students arrived at Oak Ridge on Sunday afternoon to set up their posters, and presented their research to judges the following morning. When they were not at their posters, the contestants toured the laboratory and attended lectures. Although the competition schedule was demanding, Li and Hill both found the event to be very rewarding.

“I really liked my experience at Oak Ridge,” said Li. “I thought it was really amazing and inspiring to meet so many young people who were so bright and excited about their research projects. I could easily see how conferences like the SERCh competition can really get you excited for research.”

“My weekend at Oak Ridge was unbelievable,” Hill said. “The facilities there are spectacular and I had a great time learning about the research that goes on there. As for the actual day of the competition, the only word that describes it is INTENSE.”

Li presented her research on a novel technique to visualize the liquid water content of clouds using two radars operated by the DOE’s Atmospheric Radiation Measurement Program. Hill displayed the results of his investigation of the synthesis of a new Flourine-18 protein label for use in positron emission tomography (PET) studies at the BNL Medical Department.

“I am so thankful for having had the opportunity to intern for two summers at Brookhaven,” Hill said. “I learned a lot about what it really takes to be a research scientist and gained valuable hands-on experience.”