From the Louvre to NSLS-II: Eric Dooryhee’s Research Bridges the Centuries 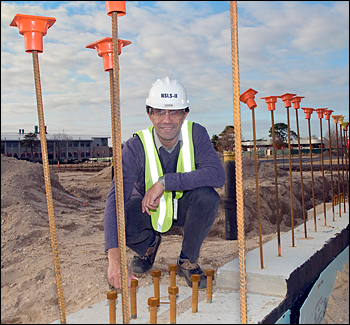 Over the past 10 years, Eric Dooryhee has been using Synchrotron Radiation Diffraction (SRD) to examine ancient objects and artifacts from the Louvre museum collections. Nowadays he is concerned with SRD’s future frontiers as group leader for the x-ray powder diffraction beamline at what will be the most advanced synchrotron light source in the world, NSLS-II at Brookhaven Lab.

Before joining the NSLS-II project staff in June, Dooryhee had never been to Long Island, and had only brief glimpses of the United States while attending conferences.

“I was at a conference in Warsaw, Poland, when I saw an ad for this position,” he said. “The job description sounded like a good match with my profile and I liked the project; I thought I would have a go at it.

“It’s fantastic to be on board such a new project in the initial stages,” he said. “To start years before it opens and get involved in the initial conception and design – it’s a great challenge. Everyone is so committed to the collective goal of getting the facility ready for Day One.”

Dooryhee is a physicist who has specialized in powder diffraction at most of the research facilities where he has worked. These include the Synchrotron Radiation Source at Daresbury, UK; the Interdisciplinary Research Center with Ions and Lasers in Caen, France; the European Synchrotron Radiation Facility in Grenoble, France; and the Neel Institute, also in Grenoble. He has a master’s degree in hard condensed matter physics and crystallography, and a Ph.D. in radiation physics, both from the University of Paris.

While working in Grenoble, he started to use SRD to examine ancient objects, in collaboration with the research facility at the Louvre.

“I started to work with L'Oréal chemists and the Musées de France's Research Laboratory as part of a fellow researcher’s Ph.D. project,” Dooryhee said. “We analyzed the precious contents of dozens of makeup jars and reeds from the Louvre’s Egyptian antiquities collection. Sophisticated analytical equipment and techniques such as scanning electronic microscope, x-ray diffraction, synchrotron radiation, spectrometers and chromatographers were necessary on minute quantities of powder to solve the mystery of the ingredients that were used in these age-old cosmetics, “ he said.

Among the mineral pigments identified (either white or black, all lead-based), the team found other white minerals like laurionite and phosgenite, fairly rare in nature.

“Based on ancient texts, and since cerusite is equally white and much easier to obtain, we concluded laurionite and phosgenite were probably added to the makeup for their therapeutic properties,” Dooryhee said.

“Were Egyptians capable of synthesizing those, thousands years ago? The answer is ‘yes’” he added. “Moreover, our diffraction analysis of the powder microstructure revealed that Egyptian cosmetologists also knew how to artfully dose ingredients to create the shiny or mat finish texture they wanted.”

Subsequently, Dooryhee’s work has included studies on a range of artifacts: cosmetic products, ancient ceramics and fresco paintings of the Mediterranean from the Greco-Roman times, gilded medieval Islamic glazed ceramics and easel paintings of the Renaissance. More recently, he did more diffraction and spectroscopic work on the Maya Blue pigment, renowned for its remarkable resistance in the forests of Meso-America for the last centuries. Since 2005, Dooryhee has run a series of international conferences called SR2A, for Synchrotron Radiation in Art and Archaeology. The next venue is the Van Gogh Museum of Amsterdam in October 2010.

As team leader for his NSLS-II beamline, Dooryhee tries to envision the future of SR powder diffraction and material science in five to ten years time.

“The scientific grand challenge is to obtain robust and quantitative structural information about materials that are complex, nanostructured and often heterogeneous,” he said. “The beamline must address future challenges in areas like hydrogen storage, CO2 sequestration, advanced structural ceramics, catalysis and materials processing – all in situ/in operando experiments difficult at other national user facilities.”

He also feels an important responsibility to build both an exciting scientific program around the beamline and a vibrant community of users.

With such challenges ahead, Dooryhee still hopes to find the time to explore his new home.

“I’m starting a new life in America and I would like to see some of the places that I have only heard about,” he said.

So far, he has only been able to explore a bit of Long Island, along with his wife Catherine and younger daughter Maeva, 12, who goes to school near their East Setauket home. Older daughter Jessica, 20, studies literature at the University of Lyon, France.

“I like particularly the fall on Long Island,” he said. “It was gorgeous – the colors, the decorations for Halloween. I like this very much.”