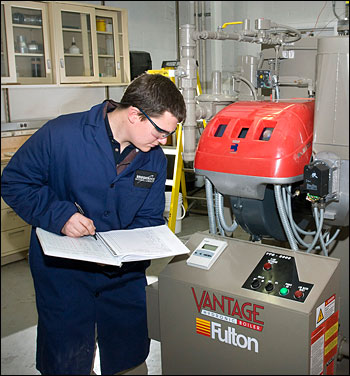 Engineers at Brookhaven’s Energy Resources Division are evaluating the performance of a new high-efficiency condensing boiler on the combustion of 100 percent biofuels.

The commercial boiler, made by Fulton Companies, is intended for heating large buildings, such as schools, supermarkets, and industrial facilities. Although it was originally designed to operate on standard heating oil or natural gas, current testing indicates high performance while running entirely on biodiesel.

Biofuels can be synthesized from a variety of plants, including soy beans and corn. Brookhaven engineers are currently testing the boiler on the combustion of a soy-based biodiesel, an animal fat-based biodiesel, and will proceed to examine the use of a raw corn oil that does not carry the processing costs associated with biodiesel. Additionally, this corn oil is inedible, so using it as a fuel source does not conflict with other use in the food supply.

Staff in the Energy Resources Division are measuring how efficiently the boiler heats a 1,900-gallon tank of water — which simulates the heating load that a commercial building might have — while operating on different fuel sources. To complete this task, they also need to conduct surface-temperature mapping of the boiler itself; this allows engineers to detect where heat is exiting the system prematurely.

The efficiency of such a technology can be expressed as the ratio of energy exiting the system for end use—measured in British thermal units (BTUs)—to energy first entering the system in the form of fuel, in this case biodiesel. It is expected that with low sulfur fuels such as biodiesel, efficiencies of such boilers will surpass 90 percent due to their ability to condense portions of the flue gas.

Regular heating oil has a higher sulfur content than biodiesel. If the water vapor produced as part of the combustion of this oil cools enough to start condensing inside the boiler, its sulfur will begin to corrode its surfaces. To avoid this problem, the water vapor must be discharged from the boiler while still at high temperature.

The escaped water vapor contains a percentage of the fuel’s energy that could be captured to increase the amount of heat delivered to a boiler’s intended destination. A condensing boiler takes advantage of the remaining energy in the water vapor, capturing it through condensation and absorbing its heat until the vapor is finally released as cold water.

“When you start condensing the vapor into water, you actually extract more heat from the fuel,” said staff engineer Chris Brown.

Biodiesel is an alternative fuel source that enables this process because of its lower sulfur content. As a result, running a condensing boiler on biodiesel instead of standard heating oil can be more efficient. Furthermore, because biodiesels are synthesized from plants that naturally take in CO2 from the surrounding air, using them as fuel brings researchers substantially closer to a carbon-neutral energy system.

“In the case of biodiesel, the CO2 that a plant extracts from the atmosphere is synthesized into triglycerides, which in turn is processed into biodiesel,” Brown said. “When biodiesel is combusted it emits the same quantity of carbon originally sequestered.”

Brown is currently evaluating the condensing boiler’s performance over approximately 100 hours of run time. Soy beans are up to bat, and corn oil is on deck.