The Department of Energy (DOE) and Brookhaven Lab were well represented at Advanced Energy 2009, the state’s premier conference for advanced energy, held this year at the Hyatt Regency Hotel and Conference Center in Hauppauge November 18-19.

The keynote speaker at the luncheon on Wednesday, November 18, was Arun Majumdar, newly appointed director of DOE’s Advanced Research Projects Agency- Energy (ARPA-E). ARPA-E is the nation’s only agency devoted to transformational energy research and development. Majumdar broadly described the energy crisis facing the nation and pointed to several promising avenues for research and development that can have game-changing impact on finding solutions, including building efficiency, the smart grid and others. His vision for ARPA-E involved developing new technologies on the basis of innovative basic research results, as well as carrying out basic research to create new technologies or to enable dramatic extensions of existing technologies.

Speaking after his talk, Majumdar said, "Consider the most prolific and game-changing technologies of the 20th century: Artificial fertilizers, airplanes, transistors, the polio vaccine, nuclear energy, the internet, and so on. Now, imagine those breakthroughs occurring over a 10 to 20 year time span. That's what we need now in energy technologies to substantially reduce greenhouse gases, enhance our energy independence and security, and increase our country's technological lead in the world."

While on Long Island for the conference, Dehmer seized the opportunity to tour the NSLS-II construction site at Brookhaven, see sidebar and photos.

A number of additional BNL scientists were on the program at Advanced Energy 2009. They included:

Brookhaven and DOE served as host sponsors of the conference, which featured 35 sessions on five tracks. Organized by Long Island’s Advanced Energy Research and Technology Center (AERTC), headquartered at Stony Brook University, the conference attracted more than 1,000 participants from government, business and academia. 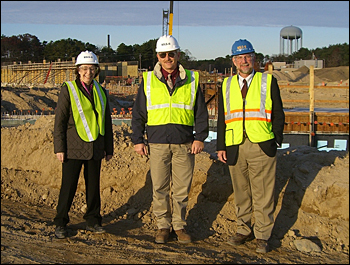 Pat Dehmer, deputy director of DOE’s Office of Science, toured the construction site for NSLS-II while on Long Island to participate in Advanced Energy 2009. Dehmer was instrumental in siting the planned $912-million user facility, scheduled to open in 2015. Stating “the place is here, the time is now,” Dehmer announced that NSLS-II would be built at Brookhaven while attending the project’s first user workshop at Brookhaven in July 2007. Along with other dignitaries, Dehmer was also present at the NSLS-II groundbreaking in June of this year.