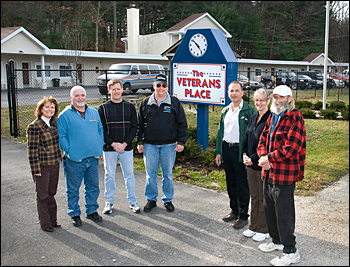 Members of the Brookhaven Veterans Association and Suffolk County United Veterans, Inc. with Walter Sorenson (right) and his niece, Marie Zielinski (second from right) outside the refurbished veterans housing location in Yaphank.

When you first meet Waldemar “Walter” Sorenson, his beard, red jacket, and demeanor may remind you of Santa Claus, and in a way, he is. Sorenson is one of many Americans who gave us a special gift -- the gift of military service for the preservation of freedom.

Sorenson, born in Southampton Hospital, is now 88 years old. He remembers his time in the infantry division of the U.S. Army vividly. “I was inducted at Camp Upton and shipped off to the South Pacific in 1942,” he said. “I also spent time in Okinawa.” He served in the military until 1946, when he returned to Camp Upton and spent a brief period of time in the convalescent hospital. “I remember those days distinctly,” said Sorenson. “They were days of great friendship and patriotism.”

But the site of Camp Upton holds added memories for the World War II veteran. Six years after being discharged from the Army, Sorenson got a job at Brookhaven Lab in the Plant Engineering Division where he worked as a rigger from 1955 to 1982. “Those were the early days of the Lab and it was interesting to be part of the evolution,” said Sorenson. “It was a great pleasure to return to the Lab this past November to participate in the Veterans Day ceremony.”

Sorenson now lives in refurbished veterans housing in Yaphank. He was living in Middle Island when his house burned down a little over two years ago. “I remembered seeing the sign for the veterans home, so I literally walked down there to see if they could help me,” he said. “I told them that I had no roof over my head and no place to go. I moved in and have been there ever since.”

Most of the veterans that stay at the Yaphank location are there temporarily while looking for jobs and trying to get back on their feet, but for Sorenson, it’s been the place he has called home for over two years.

Recently, the Lab’s Veterans Association volunteered to refurbish and update the Yaphank location. “The Brookhaven Veterans Association (BVA) partnered with Suffolk County United Veterans,” said Scott Bradley, a member of the BVA and a coordinator of the refurbishing project. “We have worked at several locations. It’s been very rewarding for us as individuals and as a group because we feel that we have made a difference for these veterans. I am most appreciative of BVA Commander Don Farnam and my fellow BNL veterans because without their volunteerism and support we couldn’t have made this happen.”

Sorenson agrees. With help from BNL and the Suffolk County United Veterans, the Yaphank location is comfortable. “I’m considered the old-timer here,” he said. I thoroughly enjoy sharing stories over meals with the others in our large kitchen.”

Joanne Massimo, who works for Suffolk County United Veterans, Inc. thinks that Sorenson is a pretty interesting guy. “At 88 years old he still keeps busy,” she said. “We call him our resident groundskeeper because we often find him outside cleaning up the litter on the street or tending to the plants and flowers. He really takes pride in where he lives.”

During the photo shoot with Sorenson, he openly carried an issue of the Brookhaven Bulletin in his pocket. He proudly said, “This is a copy of a recent Brookhaven Bulletin. I read them every week. I have enjoyed watching the Lab become the scientific leader it is today. I can honestly say I was proud to serve my country and I’ve had a good life.”