The Large Hadron Collider (LHC) at CERN has just started producing collisions, but scientists and engineers have already made significant progress in preparing for future upgrades beyond the collider’s nominal design performance, including a 10-fold increase in collision rates by the end of the next decade and, eventually, higher-energy beams.

In a test on December 4, a focusing magnet built by members of the U.S. Department of Energy’s multi-laboratory LHC Accelerator Research Program (LARP), using an advanced superconducting material, achieved the goal of a magnetic field strong enough to focus intense proton beams in the upgraded LHC interaction regions.

“This success has been made possible by the enthusiasm and dedication of many scientists, engineers, and technicians at the collaborating laboratories," said Eric Prebys of the Fermi National Accelerator Laboratory, who heads LARP, "and by the guidance and continuous support of the U.S. Department of Energy and the encouragement and contributions of CERN and the entire accelerator magnet community.”

The challenges of luminosity, heat, and radiation

Increased luminosity will mean more collision events in the LHC’s interaction regions; the major experiments will thus be able to collect more data in less time. But it will also mean that the “inner triplet” magnets, which focus the beams to tiny spots at the interaction regions and are within 20 meters of the collision points, will be subjected to even more radiation and heat than they are presently designed to withstand.

Unlike niobium titanium, however, niobium tin is brittle and sensitive to pressure; to become a superconductor when cold it must be reacted at very high temperatures, 650 to 700 degrees Celsius. Advanced magnet design and fabrication methods are needed to meet these challenges.

The Department of Energy’s Office of High Energy Physics (HEP) has long supported niobium-tin magnet research at several national laboratories through its Advanced Accelerator Technology Program. The HEP Conductor Development Program, a collaboration among national labs, universities, and industry created in 1998, was able to double the performance of niobium tin at high fields, which led to the fabrication of model coils up to four meters long and short dipole magnets with fields up to 16 tesla - about twice the nominal field of LHC – the necessary preconditions for the LARP program.

The LARP effort initially centered on a series of short quadrupole models at Fermilab and Berkeley Lab and, in parallel, a four-meter-long magnet based on racetrack coils, built at Brookhaven and Berkeley Lab. The next step involved the combined resources of all three laboratories: the fabrication of a long, large-aperture quadrupole magnet.

In 2005 DOE, CERN, and LARP agreed to set a goal of reaching, before the end of 2009, a gradient, or rate of increase in field strength, of 200 tesla per meter (200 T/m) in a four-meter-long superconducting quadrupole magnet with a 90-millimeter bore for housing the beam pipe.

This goal was met on December 4 by LARP’s first "long quadrupole shell" model magnet. The magnet’s superconducting coils performed well, as did its mechanical structure, based on a thick aluminum cylinder (shell) that supports the superconducting coils against the large forces generated by high magnetic fields and electrical currents. The magnet's ability to withstand quenches – sudden transitions to normal conductivity with resulting heating – also was excellent.

"Congratulations on behalf of CERN for this achievement, a milestone both toward the LHC luminosity upgrade and for accelerator technology advancement in general, made possible by the high technical quality of the LARP teams and leadership," said Lucio Rossi, head of the Magnets, Superconductors, and Cryostats group in CERN's Technology Department, in a message to Fermilab's Giorgio Ambrosio, head of the LARP Long Quadrupole team, which performed the successful development and test.

Rossi also praised the "strategic vision of leaders in the DOE laboratories" in initiating LARP, noting the contributions of Fermilab's Jim Strait and Peter Limon, Berkeley Lab's Steve Gourlay, and Bruce Strauss from DOE. "From my perspective, without them LARP would not have been started."

Although the successful test of the long model was a major milestone, it is only one of several steps needed to fully qualify the new technology for use in the LHC. One goal is to further increase the field gradient in the long quadrupole, both to explore the limits of the technology and to reproduce the performance levels demonstrated in short models. A second goal is to address other critical accelerator requirements, such as field quality and alignment, through a new series of models with an even larger aperture (120 millimeters).

The long quadrupole shell magnet’s conductor – high-performance niobium-tin wire meeting stringent requirements – was manufactured by Oxford Superconducting Technology of New Jersey. The wire was cabled and insulated at Berkeley Lab and qualified at Brookhaven and Fermilab. The superconducting coils were wound at Fermilab and underwent high temperature reaction at Brookhaven and Fermilab, and their instrumentation was completed at Berkeley Lab. The magnet supporting structure was designed and pre-assembled at Berkeley Lab. The final magnet assembly was done at Berkeley Lab, and the cold test was performed at Fermilab’s Vertical Magnet Test Facility.

The Long Quadrupole task leaders are, for coil fabrication, Fred Nobrega of Fermilab and Jesse Schmalzle of Brookhaven; for the supporting structure and magnet assembly, Paolo Ferracin of Berkeley Lab; for instrumentation and quench protection, Helene Felice of Berkeley Lab; and for test preparations and test, Guram Chlachidze of Fermilab. Peter Wanderer of Brookhaven led the effort during its most critical phase and was recently succeded by GianLuca Sabbi of Berkeley Lab, head of the LARP magnet research and development program. 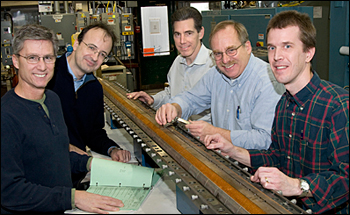 Left to Right: Fred Nobrega and Giorgio Ambrosio from Fermilab, and Mike Anerella, Glenn Jochen, and Jesse Schmalzle from Brookhaven check a coil for the long quadrupole magnet.

As part of LARP, Brookhaven Lab played an essential role in developing magnets made of niobium tin – a material that retains its superconducting properties at higher temperatures than niobium titanium, the material that’s used in RHIC and in today’s LHC magnets, making it more tolerant of the increased beam heating that will accompany increases in the LHC luminosity.

“The colder you want an environment, the bigger and more expensive the refrigeration system needed to cool it,” said Peter Wanderer, the head of Brookhaven’s Superconducting Magnet Division. “But if you replace the niobium titanium magnets in the LHC with niobium tin magnets, the accelerator will be able to reach higher luminosities with a relatively smaller refrigeration system.”

Niobium tin has great potential as a material for magnets, but it requires extensive preparation before it can function as a superconductor and operate in the stressful environment of the LHC. Brookhaven was a key player in preparing this new material for its use in the magnet recently tested at Fermilab.

“First, you have to react it,” Wanderer said. “You heat it to 650 degrees Celsius for two days. This is part of a two-week cycle of slowly increasing and decreasing temperatures. That reaction converts a special mixture of materials, such as niobium tin, into a superconductor.”

The reacted niobium tin is brittle. Thus, the next step in its preparation is the addition of an epoxy to hold the brittle material together so it doesn’t bend and break, a process called vacuum impregnation. Magnet coils were reacted and impregnated at both Brookhaven and Fermilab. The two labs kept in constant communication to ensure that collaborating scientists prepared their materials in precisely the same manner.

”LARP could not have reached this recent milestone without the dedicated cooperation of scientists across the country,” Wanderer said.

Lawrence Berkeley National Laboratory is a U.S. Department of Energy national laboratory located in Berkeley, California. It conducts unclassified scientific research for DOE’s Office of Science and is managed by the University of California. Visit our News Center at http://newscenter.lbl.gov.

Information about the US participation in the LHC is available at http://www.uslhc.us. Follow US LHC on Twitter at twitter.com/uslhc.