Building a team of experts to create the world’s most intense long-distance neutrino beamline aimed at a U.S.-based particle detector more than 10 times the size of the largest detector at the Large Hadron Collider takes time, forward thinking, and good leaders. 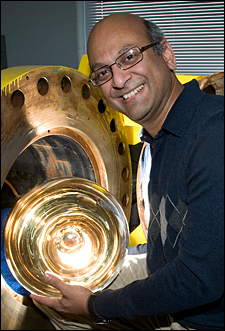 Brookhaven physicist Milind Diwan is one of two scientists selected as spokespeople for neutrino-probing experiment.

With the election of its first spokespeople – Brookhaven’s Milind Diwan and Bob Svoboda from the University of California, Davis – the proposed Long Baseline Neutrino Experiment (LBNE) has cemented its bid to unlock the mysteries of the neutrinos that permeate the world around us. Studying the light-mass neutrino could reveal an imprint of asymmetric behavior from a heavier cousin neutrino that existed at the time of the Big Bang and tipped the scales of the universe to allow baryonic matter to dominate antimatter.

Diwan and Svoboda were tapped three years ago by the National Science Foundation to put together an experimental team for LBNE. The collaboration elected them to continue working closely as spokespeople on the experiment’s research goals and infrastructure needs. The duo plans to work toward increased collaboration with Fermilab and Brookhaven.

They bring a breadth of experience, working with neutrinos for about 25 years each. Svoboda serves as co-spokesperson on the Double Chooz experiment in France. Diwan participates in the MINOS experiment at Fermilab and the Daya Bay experiment in China. These are crucial experiments that will set the stage for LBNE.

Diwan was one of the original proponents of building LBNE in 2001 to take advantage of the recent discovery that neutrinos had mass. That discovery opened the door for neutrinos to become dark matter candidates and the lynch pin to the evolution of visible matter.

“Just that discovery is of tremendous importance in how we understand the workings of the world. This has multiple consequences for our understanding,” said Diwan. “Detection of CP violation in neutrinos as well as unambiguous determination of the mass ordering of neutrinos needs a next-generation accelerator and detector facility; there is no question about that. The same detector could discover a lot of other physics: decay of a proton, for example.”

The LBNE project will include building a neutrino beamline at Fermilab and a detector of unprecedented size and capability at a laboratory located more than 700 miles away. One proposed location for this detector is the proposed Deep Underground Science and Engineering Laboratory (DUSEL) in the Homestake mine near Lead, South Dakota.

“This is an opportunity for us to push the boundaries of technology,” Diwan said.

The collaboration already has met several times at Brookhaven, UC Davis, Fermilab and in South Dakota; the next meeting is set for the end of January at Fermilab. The scale of the project, the distance between the beam source and the detector, and the international makeup of the collaboration mimics the complexity of the Tevatron collaborations CDF and DZero.

“It requires a large team so you have to look at things differently,” said Svoboda, who had experience managing large projects while in the Navy. “You have to bring people together. You have to be flexible but not lose sight of your goals. It is easy to get distracted by little things.”

Collaborators hope to get approval for construction in 2012, which would mean results could start pouring in by 2017, at the earliest.

Along with providing a crucial link to the matter/antimatter asymmetry we see in the universe today, LBNE could determine the ordering of the three light neutrino masses, a puzzle that has befuddled physicists.

“This is going to be exciting, but it is also going to be a lot of work for the next five or six years,” Svoboda said.