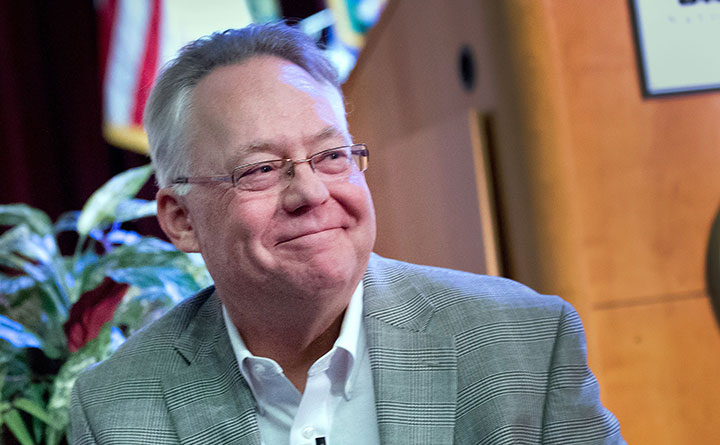 Doon Gibbs, Director of the U.S. Department of Energy’s (DOE) Brookhaven National Laboratory, was recently recognized by two regional organizations. The Long Island Association (LIA) presented Gibbs with its Lifetime Achievement Award for his work at the Lab, which delivers discovery science and transformative technology to power and secure the nation's future. He was also ranked number 23 among City & State New York's Long Island Power 100.

The LIA award recognized Gibbs’ accomplished career and his unsurpassed business and civic achievement for Long Island. The LIA is a nonprofit, nonpartisan business organization that works to enhance, strengthen, and protect Long Island as a premier place to live, work, and play. Gibbs was among three honorees at the organization's most prestigious annual event held May 17.

"Every day Doon Gibbs works to make Brookhaven National Laboratory and Long Island an international destination for world-class science. He has for decades," said LIA President & CEO Kevin Law. "The Long Island Association is proud to recognize Doon for his leadership, his lifelong career, and his collaboration with the community. The LIA also applauds Doon's colleagues at Brookhaven Lab for the discovery and innovation they've made possible in the past, present, and for years to come."

"Doon Gibbs leads a research institute that's home to some of the world's most influential scientists and rare tools like the Relativistic Heavy Ion Collider for studying the early universe—one of only two such instruments in the world. With funding from Empire State Development, Brookhaven National Laboratory recently broke ground on a new building that will house two new electron microscopes, a project that is expected to bring jobs and cutting-edge research to the region."

Gibbs said, "When I was fresh out of graduate school, I chose to work at Brookhaven National Laboratory to take advantage of the remarkable opportunities available there. As with science and technology, for me, the opportunities never ceased. It's a stunning honor to be recognized in these ways and I thank the entire staff at the Laboratory—past and present—who helped make it possible. I also thank Brookhaven Science Associates and the Department of Energy."

Brookhaven Sciences Associates (BSA) manages Brookhaven Lab for DOE's Office of Science. BSA is a partnership between Stony Brook University and Battelle, and Gibbs serves as president. The BSA Board also includes representatives from six universities—Columbia, Cornell, Harvard, Massachusetts Institute of Technology, Princeton, and Yale—two national laboratories, in addition to Brookhaven, and other organizations as well.

Gibbs has led Brookhaven Lab and its broad research portfolio since 2013. He has dedicated his entire career to Brookhaven, committing 36 years of service—half the Laboratory's 72-year history.

Gibbs moved to Long Island to join Brookhaven in 1983 after earning a master's degree and Ph.D. in physics from the University of Illinois at Urbana-Champaign. He was drawn to Brookhaven by the National Synchrotron Light Source (NSLS), where he could conduct new research on magnetic materials and surfaces using x-rays.

As he progressed in his management career, and before becoming lab director, Gibbs grew to be instrumental in enabling other scientists' research. He oversaw design and construction of the Center for Functional Nanomaterials and had significant roles advancing other major projects, including the successor to NSLS—the National Synchrotron Light Source II. Both these facilities at Brookhaven, and the leading experts and tools inside, attract scientists from around the world for advances and impacts in energy, environmental science, medicine, and beyond.

Gibbs has also been recognized by DOE for outstanding scientific accomplishment in solid state physics and was elected a Fellow of both the American Association for the Advancement of Science and the American Physical Society.

Gibbs is passionate about inclusion and diversity. Education and workforce development programs at Brookhaven support groups historically underrepresented in the sciences, including minorities and women. Gibbs has long been at the center of the Lab's efforts to serve the community, serving on the boards of the LIA and Long Island Regional Economic Development Council.