INCREASE Expands to the Center for Functional Nanomaterials

The Interdisciplinary Consortium for Research and Educational Access in Science and Engineering (INCREASE) sponsored its first Center for Functional Nanomaterials (CFN) workshop January 11-12. Organized in collaboration with the CFN and the Office of Educational Programs (OEP), the two-day workshop attracted 12 participants — including many Historically Black Colleges and Universities (HBCU) and Minority Serving Institutions (MSI) faculty members interested in becoming CFN users. 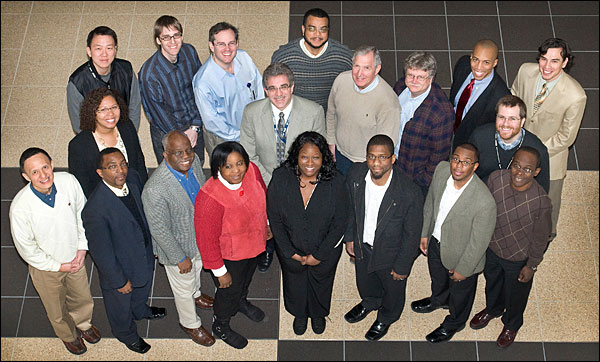 Participants in the first INCREASE-sponsored Center for Functional Nanomaterials workshop.

INCREASE, formed at Brookhaven in 2007, recently received funding from the National Science Foundation (NSF) through the Southern University of New Orleans’ (SUNO) HBCU undergraduate program grant to create workshops that educate faculty from minority groups about the opportunities available at national laboratory facilities. The funding was awarded after INCREASE held three successful National Synchrotron Light Source (NSLS)-sponsored workshops. The workshops have been a direct outcome of the Department of Energy’s (DOE) faculty and student team program at BNL.

“This is a very good collaboration for HBCUs because it brings together all of the faculty members from those campuses that do not have the big equipment and resources found at national laboratories,” explained Joe Omojola, one of the founding members of INCREASE and a mathematics and physics professor at SUNO. “This benefits both faculty and students through advancing the research capabilities of faculty members, who then train the students.”

The workshop was designed to increase awareness about CFN facilities and expand the variety and diversity of projects at BNL by providing partnerships and opportunities with different universities. These partnerships, in combination with access to first-rate research equipment, result in significantly more competitive research grant applications for the underserved faculty members.

During the workshop, visiting professors presented their own research interests before touring the CFN and NSLS, where they heard brief research presentations from CFN staff scientists. On the second day, participants wrote proposals for research time at the CFN and were informed about the overall application process. The workshop ended with one-on-one networking time for participants and staff, which resulted in the formation of new collaborations. At least five proposals for CFN equipment time are expected by the January 31 close of the proposal cycle.

“The presentations leveled out the playing field for understanding each other’s research and starting collaborations,” said workshop participant Michele Manuel, an assistant professor in the Department of Materials Science and Engineering at the University of Florida studying the effects of nanostructures in metal alloys. “I would never have had the connections if it wasn’t for this workshop. We’ve already started communicating with and e-mailing CFN staff members.”

The new collaborations also benefited CFN scientists. In addition, staff gained a rare opportunity to be involved in CFN’s public outreach efforts and learn about research outside of the Lab.

CFN director Emilio Mendez expects the workshop to increase the number and diversity – both social and geographical – of user participants.

“It is our goal and expectation that participants first learn something about CFN facilities and then disseminate the information,” Mendez said. “The effect of multiplication is very important. We expect to do this again next year.”

The number and diversity of INCREASE workshops also have growth potential. Creative combinations of user facility workshops and expansion to the entire DOE complex could be in store for the future.

“Attracting a talented pool of minority scientists from academia and expanding INCREASE workshops to other facilities beyond NSLS are good indicators that the INCREASE program can be a successful model for meeting DOE’s mission for workforce development and diversity,” said Noel Blackburn, BNL’s Educational Programs Administrator.

Omojola has high hopes for continued collaboration and development of the program due to the new funding. He foresees the potential for including undergraduate and graduate students some time in the future.

“The program started as a small thing and it is growing rapidly,” Omojola said. “I don’t see any limits with it because the numbers of participants and users of this facility will grow. Eventually, some of our faculty and students may become employees here. The proportion of minority students working in these areas will only keep growing.”