Rita Goldstein Named Member of the American College of Neuropsychopharmacology 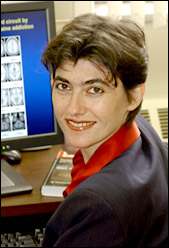 Rita Goldstein, a scientist in the Medical Department, has been named a member of the American College of Neuropsychopharmacology (ACNP). Founded in 1961, the ACNP is the nation’s premier professional society in brain, behavior, and psychopharmacology research, which involves evaluation of the effects of natural and synthetic compounds upon the brain, mind, and human behavior.

ACNP members have shown investigative skill and have made worthy contributions to the field of neuropsychopharmacology.

Goldstein, a clinical psychologist who specializes in the neuropsychology and neuroimaging of drug addiction, said, “I am honored to be accepted as an ACNP member, and I’m sure my interactions with other members will be rewarding and productive. Currently, my research goal is to better understand how cocaine addiction affects brain function and behavior, which may lead to new modalities for the treatment of addiction. This research is important because drug addiction is a chronically relapsing and a highly prevalent disorder that has catastrophic consequences to the individual and society at large.”

In 2002, Goldstein coauthored a paper published in the American Journal of Psychiatry that has since been cited nearly 450 times. The paper suggested that the brain’s prefrontal cortex overvalues drug-related stimuli while undervaluing non-drug-related stimuli in those addicted to drugs. This change in evaluation is associated with an inability to control behavior. Together, this Impaired Response Inhibition and Salience Attribution (I-RISA) model provides a rationale for compulsive drug use that continues even when the drug is no longer pleasurable or when leading to disastrous consequences. After this highly cited paper was published, Goldstein authored or coauthored numerous other well-cited manuscripts and book chapters, focusing on the role of the prefrontal cortex in the I-RISA model in addiction.

Currently, Goldstein directs BNL’s Neuropsychoimaging Group, which is internationally recognized for its use of numerous medical imaging methods, such as functional magnetic resonance imaging and positron emission tomography, to explore the neurobiological basis of impaired cognitive and emotional functioning in drug addiction.

Goldstein earned a B.A. in psychology and French from Israel’s Tel Aviv University in 1992, and a Ph.D. in health clinical psychology from the University of Miami in 1999. She received her New York State license in clinical psychology in 2001, and she worked as a postdoctoral research associate at BNL from 1999 to 2002. She joined the BNL staff as an assistant scientist in 2002, and rose through the ranks to become a tenured scientist in 2008.

In 2005, Goldstein received the “Woman of the Year in Science” award from Brookhaven Town in recognition of her contributions to science and her outreach to the addiction community. She is an affiliate in the departments of psychology and biomedical engineering at Stony Brook University.