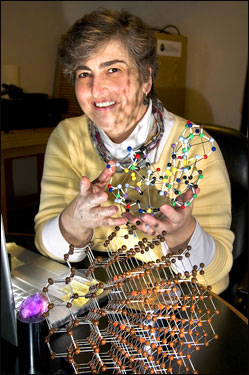 Vivian Stojanoff holds a model of the protein Lysozyme found in egg whites. A model of a silicon crystal is on the table, and an amethyst crystal sits on top of a silicon rod.

“What are crystals?” Stojanoff asks rhetorically and explains, “Crystals surround us. We eat crystals such as sugar and salt. Small crystals in our ears help us to keep our equilibrium. Human-made crystals include silicon, used in digital cameras, microwaves, cell phones, and computers. Crystals are solids in which atoms and molecules present a regular, repetitive pattern, with a very distinct shape. That is why diamonds have all those nice facets!”

Born and raised in Brazil by Austrian parents, Stojanoff earned her B.S. and M. Sc. in physics and her Ph.D. in crystallography from the University of São Paulo, Brazil. Prior to joining the NSLS as a physicist in 2001, Stojanoff held scientific staff positions at the Physics Institute of the University of São Paulo, the BNL Biology Department, and the European Synchrotron Radiation Facility.

Stojanoff recalled that nearly 40 percent of the undergraduate physics class at the University of São Paulo were women when she was a student there, and most of them continued on to graduate school. This was reflected in the faculty with about 27 percent being women. “Even today, the U.S. does not attract so many female students to physics,” she said. “The fraction of women in science decreases at every step from high school through Ph.D. programs into the workplace. A diverse workforce provides for a creative and innovation-driven work environment.”

Since 2009, Stojanoff has been a Brookhaven Women in Science (BWIS) executive board member in charge of organizing speakers for BWIS-sponsored seminars and lectures. “Most speakers I invite are suggested to me by word-of-mouth, or I’ve actually heard them speak,” she said. “I try to get speakers that will draw a wider audience for their broader views of science and their active engagement in encouraging a diverse group of students to pursue science careers.”