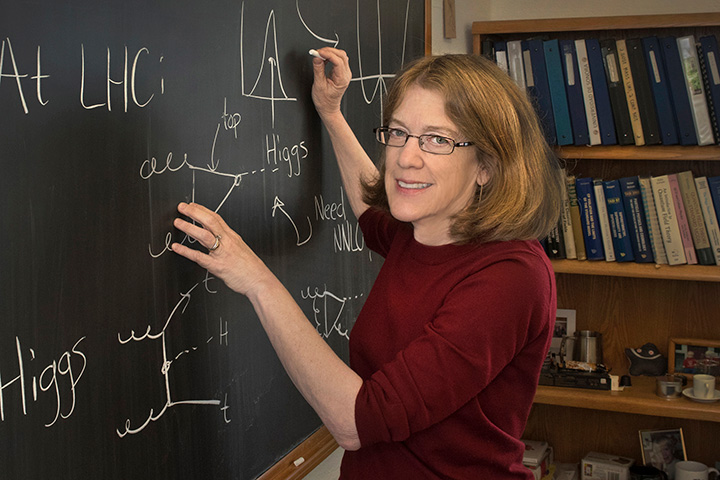 Sally Dawson, a theoretical physicist at the U.S. Department of Energy's Brookhaven National Laboratory, has received a prestigious award from the Karlsruhe Institute of Technology, Germany.

Dawson is receiving the award “in recognition of her outstanding scientific contributions to the theoretical description and deepened understanding of processes at hadron colliders, in particular regarding the physics of the Higgs boson and the top quark, where her theoretical insights have proven crucial for understanding the properties, reactions and signatures of the Higgs boson.”

Dawson will receive the award at a ceremony in Germany on July 29.

Sally Dawson’s career in physics includes research on the long-sought Higgs boson and precise calculations of the particle's properties. She is well-known in the physics arena for developing the mathematical models to explain and predict the processes in which Higgs particles are produced. The Higgs is a subatomic particle thought to give mass to other elementary particles in the Standard Model of particle physics—the theory that describes all known fundamental particles and explains how they interact.

“I am humbled to receive this award that recognizes not only my research contributions to the field of physics, but the hard work and contributions of scientists from Germany and around the world,” said Dawson.  “We are all working toward common goals—to gain a deeper understanding of the particles and forces that shape our universe.”

Scientists first discovered the Higgs at the Large Hadron Collider (LHC) at CERN in Europe in 2012. This discovery contributed to the 2013 Nobel Prize in Physics, which was awarded to two theoretical physicists who predicted the particle's existence nearly fifty years earlier. Currently, Dawson and her colleagues are collaborating to more accurately predict the production and decay processes for Higgs particles at the LHC.

“Measurements of Higgs boson properties provide a window into physics at very high energies that are not accessible at the LHC, and thus require calculations at the most detailed level,” said Dawson.

Dawson is co-author of the book, "The Higgs Hunter's Guide," a definitive and comprehensive guide to the physics of Higgs bosons. In particular, the book discusses the extended Higgs sectors required by those recent theoretical approaches that go beyond the Standard Model.

Dawson joined Brookhaven Lab's Physics Department in 1986 after earning a B.S. in physics and mathematics from Duke University in 1977 and a Ph.D. in physics from Harvard University in 1981. She was a research associate at Fermilab from 1981 to 1983 and Lawrence Berkeley National Laboratory from 1983 to 1986. After arriving at Brookhaven Lab, Dawson rose through the ranks, leading the High Energy Theory Group from 1998 to 2004 and the Physics Department as chair from 2005 to 2007 before returning to research in 2008. She has also been an adjunct professor at Stony Brook University's Yang Institute for Theoretical Physics since 2001. Additional honors include being named a fellow of the American Physical Society in 1995 and the American Association for the Advancement of Science in 2006, a recipient of the prestigious Humboldt Research Award in 2015, and the J.J. Sakurai Prize in 2016.

Dawson's research at Brookhaven is supported by the U.S. DOE Office of Science (HEP).