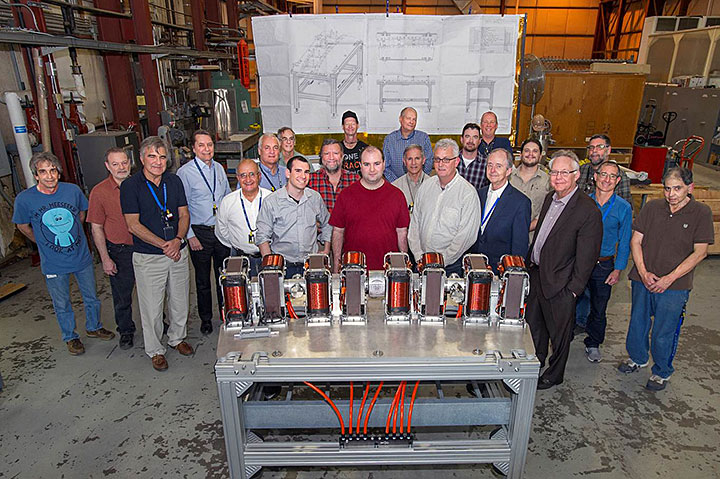 An innovative particle accelerator designed and built by scientists from the U.S. Department of Energy’s Brookhaven National Laboratory and Cornell University has achieved a significant milestone that could greatly enhance the efficiency of future particle accelerators. After sending a particle beam for one pass through the accelerator, machine components recovered nearly all of the energy required for accelerating the particles. This recovered energy can then be used for the next stage of acceleration—to accelerate another batch of particles—thus greatly reducing the potential cost of accelerating particles to high energies.

“No new power is required to maintain the radiofrequency (RF) fields in the RF cavities used for acceleration, because the accelerated beam deposits its energy in the RF cavities when it is decelerated,” said Brookhaven Lab accelerator physicist Dejan Trbojevic, who led the design and construction of key components for the project and serves as the Principal Investigator for Brookhaven’s contributions.

The prototype accelerator—known as the Cornell-Brookhaven ERL Test Accelerator (CBETA), where ERL stands for “energy-recovery linac”—was built at Cornell with funding from Brookhaven Science Associates (the managing entity of Brookhaven Lab) and the New York State Energy Research and Development Authority (NYSERDA) as a research and development project in support of a possible future nuclear physics facility, the Electron-Ion Collider (EIC). The energy-recovery approach could play an essential role in generating reusable electron beams for enhancing operations at a future EIC. The electrons would reduce the spread of ion beams in the EIC, thus increasing the number of particle collisions scientists can record to make physics discoveries.

Schematic of the CBETA energy recovery linac installed at Cornell University. Electrons produced by a direct-current (DC) photo-emitter electron source are transported by a high-power superconducting radiofrequency (SRF) injector linac into the high-current main linac cryomodule, where SRF cavities accelerate them to high energy before sending them around the racetrack-shaped accelerator. Each curved arc is made of a series of fixed field, alternating gradient (FFA) permanent magnets. After passing through the second FFA arc, the electrons re-enter the main linac cryomodule, which decelerates them and returns their energy to the RF cavities so it can be used again.

In designing and executing this project, the Brookhaven team drew on its vast experience of improving the performance of the Relativistic Heavy Ion Collider (RHIC), a DOE Office of Science user facility for nuclear physics research. The accelerator technologies being developed for the EIC would push beyond the capabilities at RHIC and open up a new frontier in nuclear physics. 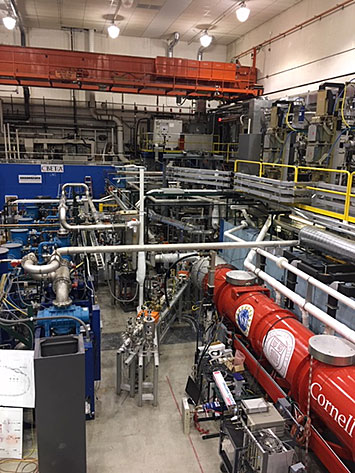 The injector and main linac cryomodule.

CBETA consists of a direct-current (DC) photo-emitter electron source that creates the electron beams to be accelerated. These electrons pass through a high-power superconducting radiofrequency (SRF) injector linac that transports them into a high-current main linac cryomodule (MLC). There, six SRF cavities accelerate the electrons to high energy, sending them around the racetrack-shaped accelerator. Each curved section of the racetrack is a single arc of permanent magnets designed with fixed-field alternating-gradient (FFA) optics that allow a single vacuum tube to accommodate beams at four different energies at the same time. After passing through the second FFA arc, the electrons re-enter the MLC, which has been uniquely optimized to decelerate the particles after a single pass and return their energy to the RF cavities so it can be used again.

When completed, CBETA will accelerate particles through four complete turns, adding energy with each pass—all of which will be recovered during deceleration after the beams have been used. This will make it the world’s first four-turn superconducting radiofrequency ERL.

Many scientists and engineers at Brookhaven Lab contributed to the design and construction of the magnets and other components of the accelerator, as well as the electronic devices that monitor the positions of the accelerated and decelerated beams: Francois Meot, Scott Berg, Stephen Brooks, and Nicholaos Tsoupas drove the design of the ERL’s optics; Brookhaven physicists led by Brooks and George Mahler designed, built, measured, and applied corrections to the permanent magnets; and Rob Michnoff led the design and construction of the beam position monitor system.

“After building and successfully testing prototypes of the magnets, we established a very successful collaboration with Cornell, led by Principal Investigator Georg Hoffstaetter, to build the ERL using the refined fixed-field magnet designs,” Trbojevic said.

Cornell provided the DC electron injector—the world’s record holder for producing high intensity, low emittance electron beams—which they recommissioned for the CBETA project. A team of young scientists and graduate students, including Adam Bartnik, Colwyn Gulliford, Kirsten Deitrick, and Nilanjan Banerjee, made other essential contributions: successfully commissioning the main linac cryomodule, and preparing the “command scripts”—computer-driven instructions—for running and commissioning the ERL in collaboration with Berg and other Brookhaven physicists. 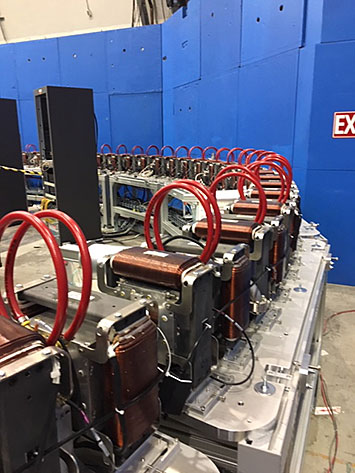 Part of one of the fixed field, alternating gradient (FFA) permanent magnet arcs.

“We hold weekly internet-based collaboration meetings and we had several visits and meetings at Cornell to ensure that the project was reaching the key milestones and that installation was proceeding according to the schedule,” said Michnoff, the Brookhaven Lab project manager.

In May 2019, the team sent an electron beam with an energy of 42 million electron volts (MeV) through the FFA return loop for the first time. The beam made it through all 200 permanent magnets without the need for a single correction. In early June 2019, an energy scan in the FFA loop showed that the return beamline transported particles of different energies superbly, agreeing very well with the expectations for the design.

Next, on June 13, the beam was accelerated to 42 MeV, transported through the FFA return loop back to the MLC, where the electrons were decelerated from 42 MeV back to the injection energy of 6 MeV, with the rest of their energy transferred back into the six SRF cavities of the main linac. And on June 24, the CBETA team achieved full energy recovery for the first time—demonstrating that each cavity could accelerate electrons on their second pass through the MLC without requiring additional external power.

“Each cavity successfully regained the energy it expended in beam acceleration, eliminating or dramatically reducing the power needed to accelerate electrons,” Trbojevic said.

“The successful demonstration of single-turn energy recovery shows that we are on the path toward creating this first-of-its-kind facility,” Trbojevic said. “The entire team is committed and excited to complete this four-turn energy-recovery linac—one of the most interesting and innovative accelerator physics project in the world today.”