The following story was originally published by the Wright-Patterson Air Force Base. It describes how scientists at the Air Force Research Laboratory's Materials and Manufacturing Directorate conducted research at the National Synchrotron Light Source II (NSLS-II)—a U.S. Department of Energy (DOE) Office of Science User Facility at DOE’s Brookhaven National Laboratory—to improve 3-D printing. Guided by NSLS-II staff, the researchers used the Coherent Hard X-ray (CHX) beamline to study the structure of their material in real-time during processing. For more information on Brookhaven’s role in this research, contact Cara Laasch (631-344-8458, laasch@bnl.gov). 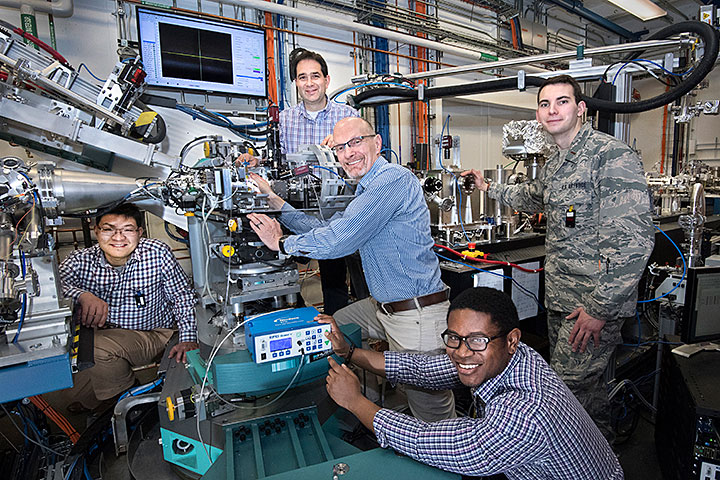 The Polymer Matrix Composites Materials and Processing research team used beamline instrumentation at Brookhaven National Laboratory to capture real-time imaging data of 3D-printed composite inks that could be used to produce aircraft structures in the future.

The standard, conventional parts for Air Force applications used today are mostly made by hand layup using a mold and continuous carbon fiber fabrics. This process is very labor intensive, time consuming, and expensive. Since molds are prepared and assembled by hand, there is a chance of defects in the structures produced.

AFRL’s Polymer Matrix Composites Materials and Processing research team has been working toward 3D-printing complex parts that will be lighter and less expensive for the Air Force. The team has added 100-300 microns long chopped fibers into the polymer. The chopped fibers are a stepping stone to producing a structure with continuous fibers that will have high and equal distribution and reduce cracks in the structure, one of the team’s main objectives.

“If we could print something and then add some type of surface finish, in theory it would take less time and be less expensive,” said Andrew Abbott, PMC M&P team member.

Pushing the thermal properties of the composite to withstand higher operating temperatures is another main objective.

In the beginning stages of research, the team found that epoxy softens when exposed to extreme heat. Since epoxy is the main component of the 3D-printing ink, they ran into an issue where the epoxy would liquefy during the printing process, resulting in the object not able to hold its shape.

To address this problem, several substances were added to the epoxy such as clay, fumed silica, and cellulose. Each of the substances, when mixed with the epoxy, make the polymer more gel-like and allow the printed epoxy to hold its shape.

When the polymer is agitated or shaken up, the substance in the epoxy breaks down, and it becomes more of a liquid. When 3D-printed to make an object, it sets or gels, much like toothpaste. The beads that exit the printer nozzle are laid down so that they fuse together. Once a layer of the beads is laid down, another layer is printed on top of these and the layers fuse together, eventually creating a part with the desired shape.

The way the beads are laid down explains why the materials currently used in the 3D-printing process cannot be used for Air Force needs. During typical 3D-printing, thermoplastics are used, which lead to poor bonding between printed layers and cracks in the structure due to a weak cross link of particles. Instead, the team uses thermosets with better fatigue behavior and mechanical robustness of the resulting printed composite parts.

The next stage is to create continuous fiber composite parts so that the beads are made stronger with equal distribution.

“One of the research team’s visions is to explore and see what’s possible in 3D-printing of composites. Complexity is something that you can do with 3D-printing that you will have a hard time doing conventionally. But to make this happen we need to understand the detailed physics and chemistry that is happening during the process,” Dr.Hilmar Koerner, PMC M&P research lead, explained.

To better understand why composites fail between beads and layers, the team has partnered with National Synchrotron Light Source II at Brookhaven National Laboratory to further examine the parts they produce.

An X-ray beam is produced using Brookhaven’s 11-ID beamline instrumentation to collect data at up to 9,000 images per second. The X-ray beam hits the 3D-printer nozzle which allows them to see real-time internal structure of the polymer as it’s printed with millisecond time resolution and micron spatial resolution. They look at how fast nano-sized particles flow to see how they align and assemble. It allows the researchers to simultaneously look at the structure and the dynamics of the 3D-printing ink during processing. This way of analyzing composite inks is the first of its kind.

Lutz Wiegart is the beamline scientist at Brookhaven National Laboratory who built the instrumentation that is being used for the 3D-printing experiments. He participated in the experiments while guiding most of the data analysis and interpretation.

“This study in particular highlighted the use of this technique for real-time ‘visualization’ of nanoscale ordering and mobility inside materials during 3D-printing, which is an exciting capability that will likely be applied more routinely in the future,” Wiegart said.