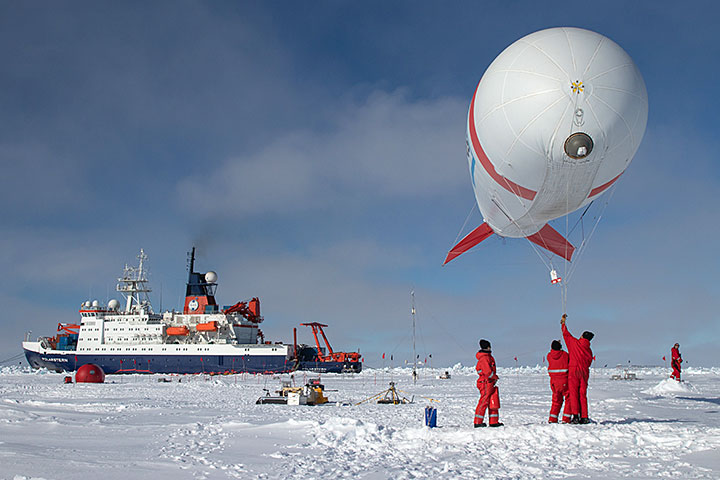 The German icebreaker RV Polarstern is scheduled to set sail today from Tromsø, Norway, for a 13-month journey to wherever the sea ice takes it. In a week or so, the ship will get locked into the Arctic ice and drift with the ice floes for a year so that scientists can gather unprecedented data about the Arctic climate.

Janek Uin and Matthew Boyer, atmospheric scientists at the U.S. Department of Energy’s (DOE) Brookhaven National Laboratory, are on board for the first phase of this international, multi-agency field campaign—the Multidisciplinary Drifting Observatory for the Study of Arctic Climate (MOSAiC)—spearheaded by the Alfred Wegener Institute, Helmholtz Centre for Polar and Marine Research (AWI) in Germany. They’re serving as “Instrument Mentors” for DOE’s Atmospheric Radiation Measurement (ARM) user facility—the world’s premier “ground-based” observations facility for advancing atmospheric and climate research. Colleagues from other DOE national laboratories—including Argonne, Los Alamos, and Pacific Northwest—are also contributing to ARM’s observational effort, and hundreds of researchers from around the U.S. and 18 other countries will take part in the overall MOSAiC campaign. 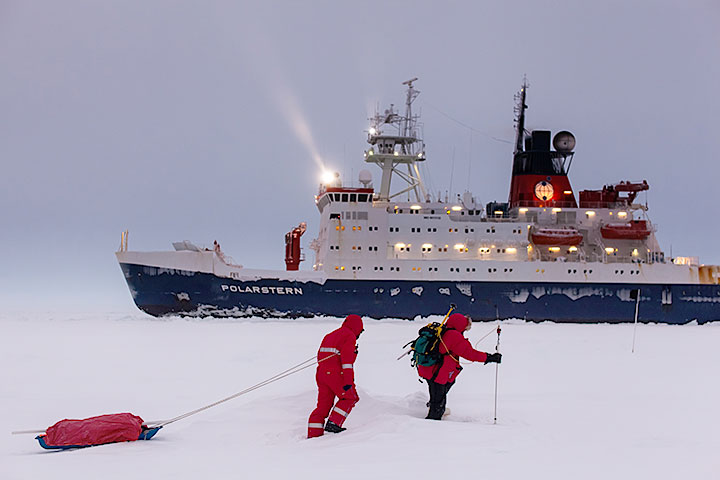 The RV Polarstern will set sail from Norway for a yearlong mission locked in the Arctic ice to collect unprecedented data about the Arctic climate. Credit: Alfred Wegener Institute, Helmholtz Centre for Polar and Marine Research

As the ship heads out to its eventual ice-locked location, Uin and Boyer will set up and test a series of sophisticated tools that sample and characterize aerosol particles—tiny particles suspended in Earth’s atmosphere. Understanding which particles are present in the Arctic, how they contribute to the formation of clouds, and how the clouds and particles interact with and impact the formation of sea ice are central aims of the study.

This won’t be the first time these ARM instruments are headed out to sea. They’re housed in an insulated SeaTainer known as the Aerosol Observing System, which was designed and built by Brookhaven scientists as part of the second ARM Mobile Facility (AMF2). The mobile laboratory can be deployed just about anywhere to generate data that’s freely available to climate researchers at universities and other labs around the world.

Depending on their workload and internet connection, the Brookhaven scientists hope to share updates about their leg of the journey. We’ll post those (and any pictures) here and on our social media channels as they come in. And we’ll be sure to talk to Janek and Matt more about their experience when they return. But for now, you can get a feel for the large-scale goals and challenges of the mission with this video trailer prepared by the MOSAiC team.