Two researchers from Brookhaven National Laboratory — Ralph James and Yonggang Cui — have been chosen as “Men of the Year in Science” by The Village Times Herald, a local weekly newspaper based in Setauket, NY. They worked together at Brookhaven to develop an imaging system to detect prostate cancer in detail at an early stage. The new system, called ProxiScan&trade;, could greatly improve the accuracy of diagnosing the potentially deadly disease and provide the detailed information needed for its early treatment. 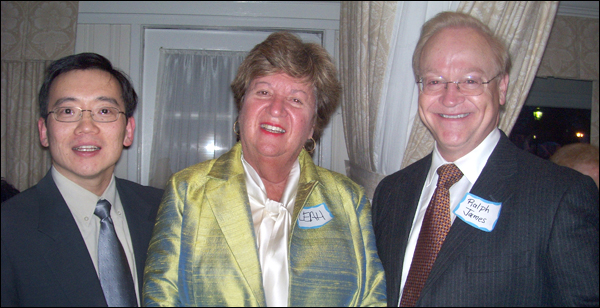 James and Cui were honored at a Village Times Herald reception at The Three Village Inn in Stony Brook on March 28. Leah Dunaief, the newspaper’s publisher, moderated the ceremony at which local men and women were honored for their significant accomplishments to benefit their communities and institutions during the past year.

One in six men develops prostate cancer during his lifetime, and one in 35 will die from it. ProxiScan&trade; may save lives when it is available in the marketplace. It is expected to be commercially attractive compared to existing technologies, since it will offer higher resolution, better image quality, and lower costs. The technology must undergo clinical testing before it is ready to be marketed.

In November 2009 at a ceremony in Florida, R&D Magazine honored both James and Cui, along with their industrial partner, Hybridyne Imagining Technologies, Inc., with an R&D 100 Award for their invention. The magazine gives these prestigious awards annually to the top 100 technological achievements of the year.

Joseph Indusi, chair of Brookhaven’s Nonproliferation and National Security Department, said, “Ralph and Yonggang usually work on developing and testing advanced semiconductor-based radiation detectors for national security purposes, but these detectors have numerous other applications -- for example, in medical imaging, environmental monitoring, and nuclear and space sciences. ProxiScan&trade; is just one offshoot of our national security work. We are proud of the knowledge, insight, and hard work that went into this invention. Ralph and Yonggang certainly deserve recognition for their excellent research.”

ProxiScan&trade; is a “gamma camera” with cadmium zinc telluride (CZT) detectors, which produce much higher resolution images than current nuclear imaging methods. Also, because the ProxiScan&trade; detectors are quite small, they can be used in a trans-rectal probe, which reduces the distance between the imaging system and the prostate gland. This allows urologists to obtain better images with a smaller amount of tracer to “tag” the tumors, compared to conventional nuclear medical systems.

“This project has been a great opportunity to take gamma-ray technology originally developed for national security and apply it toward important societal goals in the area of cancer diagnosis and treatment,” James said.

Cui added, “Our experience in detector development and electronics design has been critical in delivering this high performance system in a very compact package at a competitive cost.”

James earned a Ph.D. in applied physics from the California Institute of Technology in 1980. He held scientific/technical staff positions at two other U.S. Department of Energy labs – Oak Ridge National Laboratory and Sandia National Laboratories – before he joined Brookhaven in 2001 as the Associate Laboratory Director for Energy, Environment & National Security. In 2008, he stepped down from that position to again immerse himself in his research on a full-time basis.

James holds eleven patents, and he has authored or co-authored more than 460 scientific publications. James’s work in the area of advanced radiation detectors won him numerous awards, including five R&D 100 Awards and Discover magazine’s “Innovator of the Year” award in the field of imaging in 1997.

Cui earned a Ph.D. in nuclear electronics from Tsinghua University in Beijing, China, in 2000. After working as a postdoctoral fellow at the University of Houston from 2001 to 2006, he joined Brookhaven Lab as an assistant electrical engineer. He was promoted to associate electrical engineer in 2008.