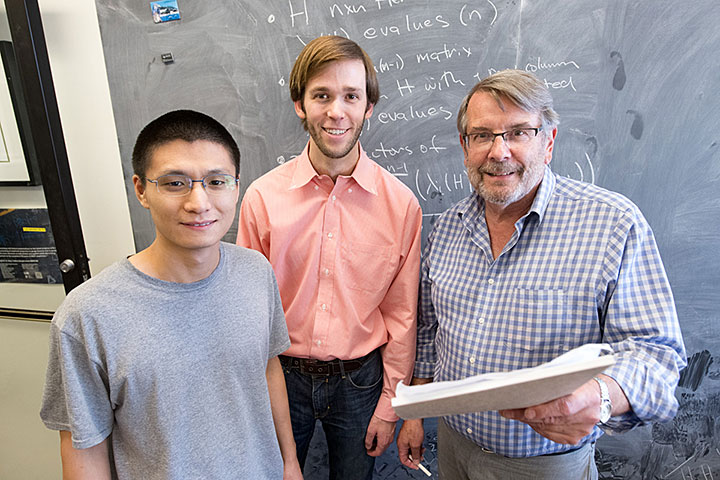 From left: Xining Zhang of the University of Chicago, Peter Denton of Brookhaven National Laboratory and Stephen Parke of Fermilab have discovered a new mathematical identity that had eluded mathematicians for centuries. Photo: Reidar Hahn

Linear algebra is a field of mathematics that has been thoroughly investigated for many centuries, providing invaluable tools used not only in mathematics, but also across physics and engineering as well as many other fields. For years physicists have used important theorems in linear algebra to quickly calculate solutions to the most complicated problems.

This August, three theoretical physicists — Peter Denton, a scientist at Brookhaven National Laboratory and a scholar at Fermilab’s Neutrino Physics Center; Stephen Parke, theoretical physicist at Fermilab; and Xining Zhang, a University of Chicago graduate student working under Parke — turned the tables and, in the context of particle physics, discovered a fundamental identity in linear algebra.

The identity relates eigenvectors and eigenvalues in a direct way that hadn’t been previously recognized. Eigenvectors and eigenvalues are two important ways of reducing the properties of a matrix to their most basic components and have applications in many math, physics and real-world contexts, such as in analyzing vibrating systems and facial recognition programs. The eigenvectors identify the directions in which a transformation occurs, and the eigenvalues specify the amount of stretching or compressing that occurs.

Experts fully expected the identity to exist somewhere in the literature for centuries but couldn’t find any evidence for it online or in textbooks. The three of us were eventually directed to a similar result by UCLA mathematics professor Terence Tao, who has a Fields Medal and Breakthrough Prize to his name. When we presented Tao with our result, he cheerfully declared that it was, in fact, the discovery of a new identity, and he provided several mathematical proofs, which have now been published online. Tao also discussed the new identity in his math blog.

The physics usage case of this result stems from our investigations of neutrino oscillation probabilities in matter, which involve finding eigenvectors and eigenvalues, both of which are rather complicated expressions. While the eigenvalues are somewhat unavoidably tricky, this new result shows that the eigenvectors can be written down in a simple, compact, and easy-to-remember form, once the eigenvalues are calculated. For this reason, we called the eigenvalues “the Rosetta Stone” for neutrino oscillations in our original publication — once you have them, you know everything you want to know.

This work is supported by the DOE Office of Science.