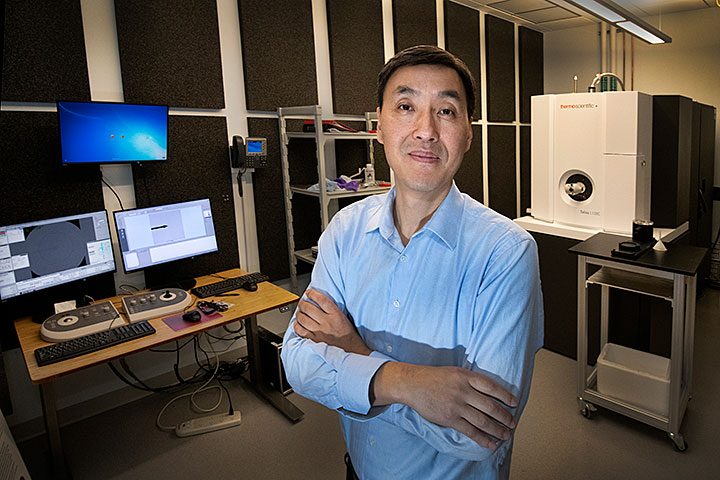 This spring, the U.S. Department of Energy’s (DOE) Brookhaven National Laboratory will open its new cryo-electron microscopy (cryo-EM) center, the Laboratory for BioMolecular Structure (LBMS). A state-of-the-art research center for life sciences imaging, LBMS will offer two advanced cryo-electron microscopes for studying complex proteins, as well as the architecture of cells and tissues. Leading the facility’s science initiatives is Liguo Wang, who began working at Brookhaven in his new role as the scientific operations director of LBMS in October 2019.

“We are very excited to launch LBMS and offer new research capabilities to our community,” Wang said. “This is just the beginning of our cryo-EM center. There are still a lot of opportunities to grow the facility and explore new scientific applications.”

As the construction of the LBMS building enters its final stages, Wang is busy preparing the facility for its first visiting researchers, also known as “users.”

“In the facility’s first year, we’d like to have users from New York State and nationwide,” Wang said.

To attract scientists from across the country who are studying the most pressing questions in biology, Wang is tasked with coordinating the installation and scientific testing of the world-class instruments at LBMS. Installation of the largest microscope is expected to begin in February when construction of the building is completed. Wang has already tested the second, complementary microscope, which will be used for sample screening and lower resolution studies. Both microscopes were funded by a $15 million contribution from NY State, as LBMS’s wide variety of resources is expected to provide a significant boost to the competitiveness of NY State’s bioscience community.

Wang prepares samples at the Talos L120C, a cryo-electron microscope that will be used for sample screening at LBMS. The second, larger microscope, a Krios G3i, will be used for high resolution studies and installed at LBMS in February.

Beyond the advanced research tools that will be available at LBMS, users will have access to training opportunities from the facility’s staff, and Wang is currently leading the effort to hire additional staff members. Once LBMS is up and running, Wang and his team will train new users and review users’ scientific proposals for access to the facility.

Before coming to Brookhaven Lab, Wang was an assistant professor in the department of biological structure at the University of Washington, where he carried out research using cryo-EM and taught the university’s first cryo-EM course. He earned a Ph.D. in chemical and biomedical engineering from Cornell University and conducted his postdoc at Yale University, where he developed a new technique for controlling the chemical and electrical environment of membrane proteins.

“We put membrane proteins into artificial lipid vesicles, which mimic cells. You can think of it like a soap bubble,” Wang said. “Then, we can control the solutions inside and outside of the vesicle, and we can apply a voltage to manipulate the functional state of voltage-gated ion channels or apply stimuli to only one side of the lipid membrane.”

Wang will continue to develop his technique at Brookhaven Lab, in addition to driving new science initiatives at LBMS. In particular, he’s collaborating with other departments at Brookhaven, including scientists at NSLS-II and in the Lab’s biology department, to push the facility’s capabilities beyond the study of complex proteins.

“Current cryo-EM facilities are mainly focused on protein structures and complexes, but one special thing about LBMS is that we want to bring in more researchers from the bioenergy community to image the ultrastructure of their samples in detail,” Wang said. “I’m organizing a workshop for the next NSLS-II Users’ Meeting in May that will show plant and microbe scientists what they can do with our facility.”

In addition to developing the science initiatives for LBMS, Wang hopes to develop new research techniques that will use automation, helping the facility run more efficiently and produce more high-impact science. Later in the facility’s future, Wang will seek funding for additional microscopes to be installed at LBMS.

“The building is able to house four microscopes, not just the one, so there’s plenty of space and our goal is to fill it,” Wang said.

He added, “cryo-EM is a really powerful technique. Nature Methods named it the Method of the Year in 2015, and three pioneers in cryo-EM won the Nobel Prize in chemistry in 2017. There are a lot of opportunities in this field, and I’m excited to try some pioneering work at LBMS and see this facility grow.”

Operations at LBMS and NSLS-II are funded by DOE’s Office of Science.