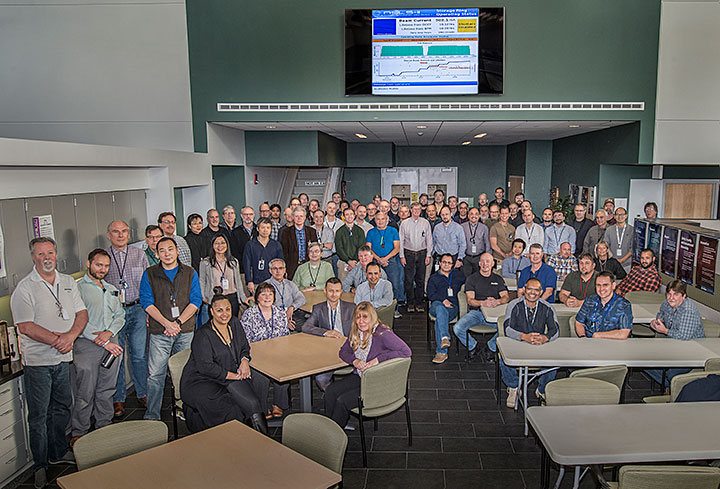 The NSLS-II accelerator division proudly gathered to celebrate their recent achievement. The screen above them shows the slow increase of the electron current in the NSLS-II storage ring and its stability.

UPTON – The National Synchrotron Light Source II (NSLS-II) at the U.S. Department of Energy’s (DOE) Brookhaven National Laboratory is a gigantic x-ray microscope that allows scientists to study the inner structure of all kinds of material and devices in real time under realistic operating conditions. The scientists using the machine are seeking answers to questions including how can we built longer lasting batteries; when life started on our planet; and what kinds of new materials can be used in quantum computers, along with many other questions in a wide variety of research fields.

The heart of the facility is a particle accelerator that circulates electrons at nearly the speed of light around the roughly half-a-mile-long ring. Steered by special magnets within the ring, the electrons generate ultrabright x-rays that enable scientists to address the broad spectrum of research at NSLS-II.

Now, the accelerator division at NSLS-II has reached a new milestone for machine performance. During recent accelerator studies, the team has been able to ramp up the machine to 500 milliamperes (mA) of current and to keep this current stable for more than six hours. Similar to a current in a river, the current in an accelerator is a measure of the number of electrons that circulate the ring at any given time. In NSLS-II’s case, a higher electron current opens the pathway to more intense x-rays for all the experiments happening at the facility.

“Since we turned on the machine for the first time in 2014 with 50mA current, we have progressed steadily upwards in current and now – in just five years – we have reached 500mA,” said Timur Shaftan, NSLS-II accelerator division director. “Along the way, we encountered many significant challenges, and it is thanks to the dedication, knowledge, and expertise of the team that we were able to overcome them all to get here.”

All good things come in threes?

On their quest to a higher current, the accelerator division faced three major challenges: an increase in power consumption of the radiofrequency (RF) accelerating cavities, more intense “wakefields,” and the unexpected heating of some accelerator components.

The purpose of the RF accelerating cavities can be compared to pushing a child on a swing - with the child being the electrons. With the correct timing, large amplitudes can be driven with little effort. The cavities feed more and more energy to the electrons to compensate for the energy the electrons lose as they generate x-rays in their trips around the ring.

“The cavities use electricity to push the electrons forward, and even though our cavities are very efficient, they still draw a good amount of raw power,” said Jim Rose, RF group leader. “To reach 500 mA, we monitored this increase closely to ensure that we wouldn’t cross our limit for power, which we didn’t. However, there is another challenge we now have to face: The cavities compress the groups of electrons—we call them bunches—that rush through the machine, and by doing so they increase the heating issues that we face. To fully address this in the future, we will install other cavities of a different RF frequency that would lengthen the bunches again.”

Rose is referring to the issue of “wakefields.” As the electrons speed around the ring, they create so called wakefields—just like when you run your finger through still water and create waves that roll on even though your fingers are long gone. In the same way, the rushing electrons generate a front of electric fields that follow them around the ring.

“Having more intense wakefields causes two challenges: First, these fields influence the next set of electrons, causing them to lose energy and become unstable, and second, they heat up the vacuum chamber in which the beam travels,” said accelerator physicist Alexei Blednykh. “One of the limiting components in our efforts to reach 500mA was the ceramic vacuum chambers, because they were overheating. We mitigated the effect by installing additional cooling fans. However, to fully solve the issue we will need to replace the existing chambers with new chambers that have a thin titanium coating on the inside.”

The accelerator division decided to coat all the new vacuum chambers in house using a technique called direct current magnetron sputtering. During the sputtering process, a titanium target is bombarded with ionized gas so that it ejects millions of titanium atoms, which spray onto the surface of the vacuum chamber to create a thin metal film.

“At first, coating chambers sounds easy enough, but our chambers are long and narrow, which forces you to think differently how you can apply the coating. We had to design a coating system that was capable of handling the geometry of our chambers,” said vacuum group leader Charlie Hetzel. “Once we developed a system that could be used to coat the chambers, we had to develop a method that could accurately measure the thickness and uniformity along the entire length of the chamber.”

For the vacuum chambers to survive the machine at high current, the coatings had to meet a number of demanding requirements in terms of their adhesion, thickness, and uniformity.

The third challenge the team needed to overcome was resolving the unexpected heating found between some of the vacuum flanges. Each of the vacuum joints around the half-mile long accelerator contain a delicate RF bridge. Any errors during installation can result in additional heating and risk to the vacuum seal of the machine.

“We knew from the beginning that increasing the current to 500 mA would be hard on the machine, however, we needed to know exactly where the real hot spots were,” explained accelerator coordination group leader Guimei Wang. “So, we installed more than 1000 temperature sensors around the whole machine, and we ran more than 400 hours of high-current beam studies over the past three years, where we monitored the temperature, vacuum, and many other parameters of the electrons very closely to really understand how our machine is behaving.”

Based on all these studies and many more hours spend analyzing each single study run, the accelerator team made the necessary decisions as to which what parts needed to be coated or changed and, most importantly, how to run the machine at such a high current safely and reliably.

Where do we go from here?

Achieving 500mA during beam studies was an important step to begin to shed light on the physics within the machine at these high currents, as well as to understand the present limits of the accelerator. Equipped with these new insights, the accelerator division now knows that their machine can reach the 500mA current for a short time, but at this point it’s not possible to sustain high current for operations over extended periods with the RF power necessary to deliver it to users. To run the machine at this current, NSLS-II’s accelerator will need additional RF systems both to lengthen the bunches and to secure high reliability of operations, while providing sufficient RF power to the beam to generate x-rays for the growing set of beamlines.

“Achieving 500 mA for the first time is a major milestone in the life of NSLS-II, showing that we can reach the aggressive design current goals we set for ourselves when we first started thinking about what NSLS-II could be all those years ago. This success is due to a lot of hard work, expertise, and dedication by many, many people at NSLS-II and I would like to thank them all very much,” said NSLS-II Director John Hill. “The next steps are to fully understand how the machine behaves at this current and ultimately deliver it to our users. This will require further upgrades to our accelerator systems—and we are actively working towards those now.”

NSLS-II is a DOE Office of Science user facility.