Understanding and directing the formation of defects could enable inexpensive, widely available metals like iron to be efficient and stable catalysts 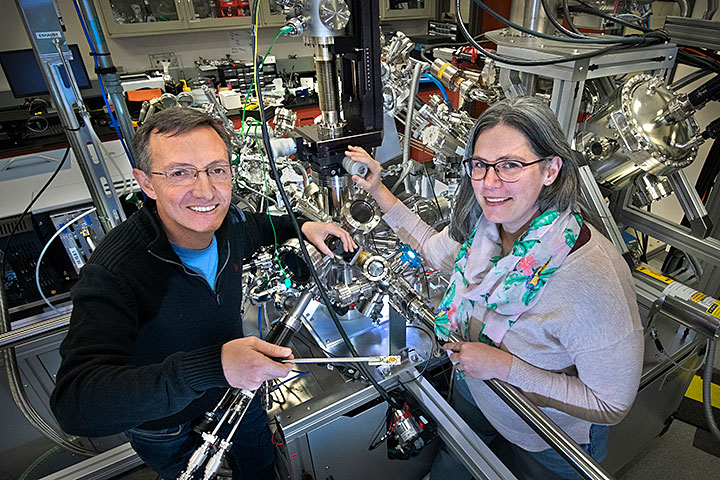 Catalysts, or substances that accelerate chemical reactions, have various industrial applications. One widely used catalyst in catalytic converters is palladium, which helps turn toxic carbon monoxide and hydrocarbons from vehicle exhaust into carbon dioxide and water through oxidation. But like other precious metals such as platinum, palladium is rare. Because of its limited supply, palladium is an expensive commodity.

Replacing precious metal catalysts with those based on more abundant metals such as iron would significantly decrease their cost. However, iron catalysts, while highly efficient, tend to quickly deactivate. For example, iron oxide catalysts become “poisoned” when their surfaces are covered by carbon species formed during reactions with carbon-containing molecules, such as when carbon monoxide dissociates into carbon and oxygen. Carbon deposited on the catalyst surface blocks the active sites and prevents further reactions from taking place, thus “poisoning” and ultimately deactivating the catalyst.

“One form of iron oxide, FeO, is a very inexpensive material that is active for oxidation, but too active for its own good,” said Dario Stacchiola, leader of the Interface Science and Catalysis Group at the Center for Functional Nanomaterials (CFN)—a U.S. Department of Energy (DOE) Office of Science User Facility at Brookhaven National Laboratory—and an adjunct professor in the Chemistry Department at Stony Brook University. “Creating structures with iron that are active enough to promote the reaction without becoming deactivated could open the door to using these catalysts in practical applications.”

Stacchiola and collaborators found a structure that might be able to do just that. The scientists prepared a thin layer of FeO nanoparticles on top of a gold surface and discovered that dislocation lines appearing on the FeO surface are very active yet do not get poisoned. These defect lines consist of iron atoms surrounded by four oxygen atoms instead of the normal three.

The team detected the defects in high-resolution images recorded via low-temperature scanning tunneling microscopy (STM) at the CFN Proximal Probes Facility and Nanjing University of Science and Technology in China, where team member and former CFN postdoc Tianchao Niu is now a professor. In STM, electrical current is measured as electrons tunnel between a sample surface and a metal tip that scans across the surface.

The scientists then studied the oxidation and reduction of FeO in environments of oxygen gas and carbon monoxide, respectively. To monitor the atomic and chemical structure of the catalyst, they performed surface-science studies at room temperature and ambient pressure (AP). In particular, they used a state-of-the-art AP-STM instrument available to academic and industrial users at the CFN.

“We wanted to see if the catalyst would be active at moderate conditions because high temperatures or pressures can dissociate carbon monoxide into carbon, deactivating the catalyst,” said Stacchiola. “By conducting these studies at ambient pressure, we can observe how the material changes while it is working. Only then can we understand the chemical processes happening at the atomic and molecular level.”

Upon oxidation, the dislocation lines disappeared and the height of the FeO layer increased, suggesting that oxygen atoms had been incorporated. A sequential exposure to carbon monoxide resulted in the regeneration of the dislocation lines and a reduction in the height of FeO, indicating the removal of the oxygen atoms. After imaging each of these reaction steps through AP-STM, the scientists used x-ray photoelectron spectroscopy (XPS) to determine which chemical species were present and their respective oxidation states (number of electrons removed or added). This chemical information can be determined based on the energy of electrons emitted from the sample surface after excitation by x-rays.

“The oxidation and reduction of FeO is reversible,” said Stacchiola. “Oxygen was added and removed without leaving carbon behind. Because iron in the dislocation lines is coordinated to a different number of oxygen atoms than usual, its oxidation state changes. This change favors the dissociation of molecular oxygen—a very stable molecule—into two oxygen atoms. The accumulation of atomic oxygen on the FeO surface in turn promotes the oxidation of carbon monoxide.”

Zhao Jiang at Xi’an Jiaotong University in China then calculated the reaction pathway energetics. Jiang found that the oxidation of carbon monoxide is energetically easier when additional oxygen atoms are adsorbed onto the FeO surface.

Going forward, Stacchiola and his group will continue to explore earth-abundant metals for catalysis. Ashley Head, a scientist in the group, in collaboration with Baran Eren of the Weizmann Institute of Science in Israel, recently investigated the role that surface impurities and manganese oxide play in the catalytic enhancement of cobalt catalysts for the conversion of carbon monoxide and hydrogen into synthesis gas, which is used in the manufacture of chemicals and fuels. This experiment was one of the first fully conducted with the AP-XPS instrument at the CFN Proximal Probes Facility.

“The complementary in situ microscopy and spectroscopy facilities open to CFN users are ideally suited for these kinds of surface chemistry studies,” said Stacchiola.

The research on the FeO catalysts—published on Feb. 19 in The Journal of Chemical Physics and selected by the editors as a featured article—was in part supported by the Integrated Mesocale Architectures for Sustainable Catalysis, a DOE Energy Frontier Research Center headquartered at Harvard University.