The Play-by-Play of Energy Conversion: Catching Catalysts in Action 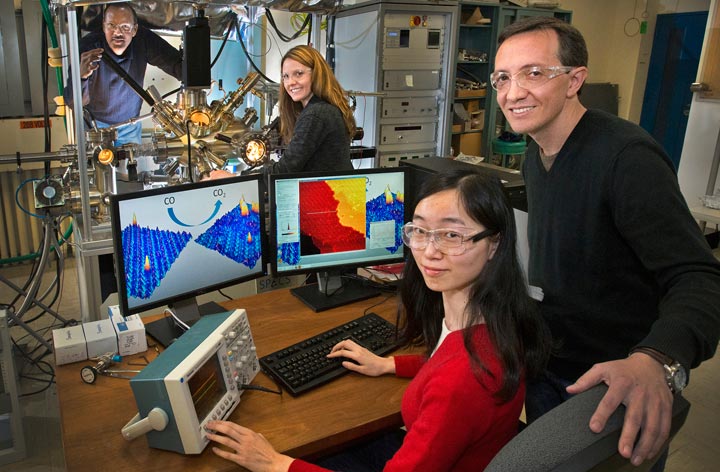 The whistle blows and the big game begins on TV. You watch the punted football sail over the field and into the arms of the opposing team—then the feed abruptly cuts out. The information blackout is apparently universal, with no coverage online or on the radio. Hours later, the signal returns and you learn that your beloved home team pulled off a stunning, come-from-behind victory. But here’s the kicker: there’s no way to find out the play-by-play. Did the quarterback’s last-second Hail-Mary pass decide the game, or was it a devastating interception returned for a touchdown?

“For the first time, a comprehensive set of tools is available for exploring correlations among the morphological, structural, electronic, and chemical properties of catalytic materials under working conditions.”

Believe it or not, catalytic chemical reactions can fall into a similar blackout, but watching the “game” is trickier than buying a ticket or tuning in on the television. Before catalysis unfolds in a laboratory, scientists painstakingly assemble the materials and spark a reaction. But like that lost signal, many experimental techniques only capture the static details before and after the reaction. Now, researchers at the U.S. Department of Energy’s Brookhaven National Laboratory have demonstrated an unprecedented ability to peer into the dynamic, real-time reactions blazing along at scales spanning just billionths of a meter.

“For the first time, a comprehensive set of tools is available for exploring correlations among the morphological, structural, electronic, and chemical properties of catalytic materials under working conditions,” said Darío Stacchiola, a Brookhaven Lab chemist and coauthor on two recent studies. “These in situ studies allow us to propose reaction mechanisms and help guide the design of more efficient catalysts.”

The two studies—published in Angewandte Chemie and the Journal of the American Chemical Society—used microscopy and spectroscopy to catch custom-built catalysts during processes that could play a crucial role in securing sustainable sources of energy. The results not only demonstrate an experimental breakthrough, but they may also lead to better-than-ever methods of distilling hydrogen or purifying exhaust gases from cars.

Materials scientists often probe catalysts under frigid, ultra-high vacuum conditions to avoid the ever-present threat of interactions with ambient particles that can obscure the data—but these catalysts must ultimately operate in industrial processes and next-gen devices. To bridge that gap, Brookhaven Lab’s Catalysis Group combined a new suite of tools for atomic-scale synthesis and characterization in the Chemistry Department and Center for Functional Nanomaterials (CFN) with powerful synchrotron x-rays.

Using Ambient Pressure Scanning Tunneling Microscopy (AP-STM), the reduction of a model catalyst was monitored at the nanoscale, observing the structural transformation from a copper-oxide film to glass-like ring structures, and then to metallic copper.

Apply a little heat to the right catalyst and water and carbon monoxide can transform into pure hydrogen gas and carbon dioxide (H20 + CO = H2 + CO2). The process, called the water-gas shift reaction (WGS), can provide the high-purity hydrogen crucial to applications as varied as fertilizer synthesis and automobile fuel cell technology.

The Brookhaven Lab collaboration had already discovered that combining copper or gold with ceria—rather than the zinc oxide commonly used in commercial catalysts—yielded excellent WGS performance, but they were unable to explain why. To pinpoint the reaction mechanism, the researchers enlisted photons to interrogate the catalysts:

“Theory suggested that this interface could be a critical catalysis site, but the complexity of the reaction system prevented direct observation and confirmation,” said Jesus Graciani, a study coauthor and collaborator from the University of Seville, Spain. “But our method unequivocally proved the presence of bent CO2 molecules. These were not predicted to be relevant to the reaction, but they prove the existence of an associative mechanism at the metal/oxide interface. Maximizing the number of interfacial sites could be the key to more efficient hydrogen generation.”

Low-energy electron microscopy (LEEM) imaging shows the spread of metallic fronts on a microscopic scale as the reduction of copper oxide progresses.

Oxidation—responsible for the creeping rust that ruins some metals—and reduction reactions are ubiquitous for various catalytic processes, propagating across a material and transforming its chemical properties. Understanding the reaction’s journey and impact on the catalysts can help optimize processes ranging from air pollution control to synthesis of oxygenated fuels.

“We can finally see the dynamic nature of oxide catalysts with clarity,” said study coauthor and Brookhaven Lab scientist Ashleigh Baber. “We now know that nanoscale defects impact the way copper oxidizes or reduces. We also found that metallic copper quickly makes copper nanoparticles that fly across the surface in the presence of reactants, providing a new framework for molecular-level improvements to catalyst construction.”

The Future of Catalysis – Live and Direct

Two synchrotrons, the Advanced Light Source at Lawrence Berkeley National Lab and the MAX-Lab in Sweden, provided the x-rays for the crucial spectroscopy work and helped move in situ studies closer than ever to mirroring industrial and commercial conditions—but some details remain hidden. Beginning in 2015, the next-generation National Synchrotron Light Source II (NSLS-II) will provide even brighter x-rays, and the Center for Functional Nanomaterials (CFN) will operate the first truly Ambient Pressure XPS end station. This cutting-edge instrument will allow researchers to obtain unparalleled information about the electronic state of active catalysts.

“The sets of state of the art tools at both NSLS and CFN allow us to attack the same system from multiple directions, providing a picture that goes beyond the individual components,” Stacchiola said. “Future reaction studies will require higher pressures than the current AP-XPS setup can handle, but that will all change when we begin working with NSLS-II.”

This research was supported by the U.S. Department of Energy’s Office of Science, Spain’s Ministerio de Economía y Competitividad, and the Swedish Research Council.