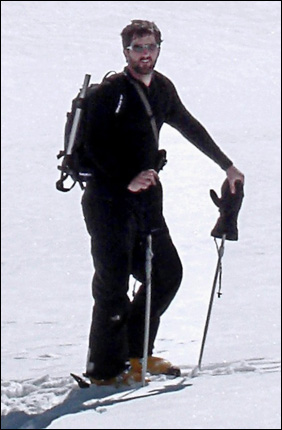 RHIC researcher and MIT postdoc Joe Seele takes a break from exploring the subatomic world to explore the Elk Mountain Range in Colorado.

Joe Seele is a postdoc at the Massachusetts Institute of Technology (MIT) and has worked with Brookhaven National Laboratory’s Relativistic Heavy Ion Collider (RHIC) since 2003. In 2008, he earned a Ph.D. in nuclear physics from the University of Colorado at Boulder and now, stationed at MIT, he uses data from the STAR detector at RHIC to better understand the proton’s spin.

I first learned about RHIC as an undergrad when I worked on another proton spin experiment in Germany. Since the experiments at RHIC were the “competition,” it was only natural that I learned about them too.

What are you trying to achieve there?

I am trying to understand how all the many pieces that make up a proton come together to give the proton its spin.

Why do you work with RHIC?

It’s the only polarized proton collider in the world! It allows us to study proton spin in ways that were never done before at any other accelerators.

I’d say no, but discovery is a tricky thing — it implies something unexpected in addition to not having been seen before. I’ve measured quantities that have never been measured before, but they’ve all been in line with what was expected based on our current knowledge.

Seeing the W boson for the first time. In 2009, RHIC ran at its highest collision energy yet. This made it possible to see a different type of particle called the W boson. We only expected to see a handful of them in the billions of particle collisions that happened. Sure enough, after many months of work, the Ws emerged from the haystack of data.

I work with a gaggle of graduate students and researchers based at MIT as well as a larger group of physicists at STAR, all interested in proton spin phenomena.

Do you have any other special talents/interests?

I love anything that involves doing slightly crazy activities in the mountains. In my vast spare time (tongue fully in cheek) I am an enthusiastic mountaineer, backcountry skier, and long-distance runner.

Is there anything else you would like to add?

Its often said that no physicist works in a complete vacuum, so I would like to thank all my fellow scientists who have had an impact on my knowledge of, understanding of, and passion for measurement and physics.