Alan Alda, actor and host of PBS’s “Scientific American Frontiers” series, captivated an audience of nearly 300 researchers and support staff at the Science Communication Workshop held on April 9 at Brookhaven Lab by talking about wooing public interest in science. The daylong workshop, presented by the Center for Communicating Science — a cooperative venture of Brookhaven National Laboratory, Stony Brook University, and Cold Spring Harbor Laboratory — focused on how to tell the public engaging stories about scientific research. 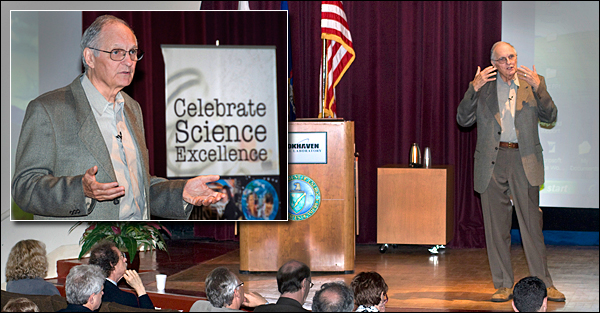 “Science is a great detective story,” Alda said. “But not if you tell us who the killer is before we know that there was a murder, and not if you fail to lead us through the blind alleys you went down.”

His motivational message equated capturing the public’s interest in science with the three stages of falling in love. The first stage, inflaming interest, is similar to going on a blind date, he explained: you must win over your date’s interest with engaging body language and tone, a skill taught in the improvisational workshops later in the day. The second stage, infatuation, is about learning to engage a person’s emotions by telling captivating stories. Finally, Alda spoke about the third stage: winning over a person’s commitment to learn more and gain a deeper understanding.

“Don’t be afraid to share your excitement about science,” Alda said. “We will get caught up in the emotion of it. Let’s tell stories and excite the lust in one another for the curiosity that we have and let’s fall in love (with science).”

Following Alda’s opening remarks, a panel of scientists and communication experts discussed public perception of science and ways to increase society’s understanding of science. The rest of the afternoon encompassed workshops that provided scientists with tools they can use to awaken and stimulate public interest in science.

The first workshop, which attracted about 75 participants, focused on how to distill a clear message with planning and preparation. The participants then broke into small groups for seminars including improvisational theater games that taught engaging public speaking skills; writing workshops that provided tools for lending one’s voice to societal issues, such as by writing op-ed articles; and workshops about technologies, such as social media and blogs, that allow more direct communication with the public.