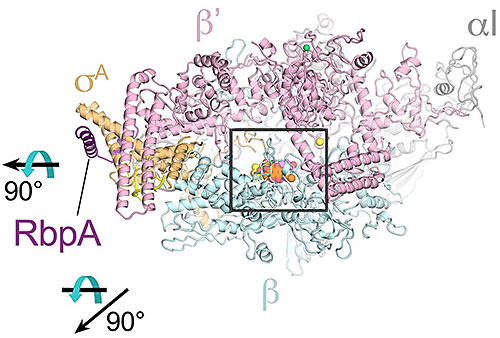 The image shows the overall structural basis for Kang A inhibition of rifamycin resistant bacteria. The rifamycin scaffold is colored orange in the center of the RNA polymerase enzyme, the target of the antibiotic. Image Credit: Nature Communications 9, 4147 (2018)

The effectiveness of some antibiotics is threatened by the increasing bacterial resistance; this study explores a new route to potential replacements for these antibiotics.

Many antibiotics commonly used to treat tuberculosis and other gram-positive bacterial infections are semisynthetic derivatives of the bacterial natural product rifamycin. As with many antibiotics, the clinical utility of these therapeutics has declined due to the increase of antibiotic resistant bacteria.

In this study, scientists proposed that some naturally occurring microbes, so-called rifamycin congeners, might have developed other properties capable of circumventing common antibiotic resistance mechanisms. These new congeners might be usable in a clinical setting and, therefore, could provide a source of new therapeutics for illnesses caused by rifamycin resistant bacteria.

By surveying soil metagenomes, the researchers identified a different class of rifamycin congeners, called kanglemycins, or just Kang, which have a high potential of overcoming the most common resistance. After making this identification, the researchers studied Kang’s specific function and mechanism to evaluate if it could overcome the resistance. They found that Kang uses a different inhibition mechanism, which may give rise to its potential to overcome resistance.

The study showed that large-scale metagenome sequencing methods help to identify even the most complex gene clusters in known antibiotic families and can be used to find potential new sources for natural solutions to commonly encountered antibiotic resistance.