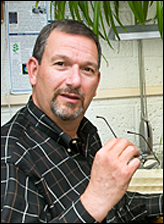 Richard Ferrieri, a chemist in the Medical Department, was awarded tenure for his world-class research in radiochemistry and his outstanding contributions in the field of applying radiotracer techniques, first developed for studying the human brain, to the study of plants.

“Rich’s extraordinary skill in developing synthetic procedures for radiolabeling, now applied to plants, has won recognition from plant scientists all over the world,” said Gene-Jack Wang, Medical Chair. “His work has had an important impact on the advancement of radiotracer synthesis and imaging, and its potential application to problems in energy and the environment are far-reaching.”

Ferrieri first focused on developing novel syntheses of drug targets for producing radionuclides and innovative devices for radiochemistry synthesis in positron emission tomography or PET. His concept for using supercritical fluids for the selective synthesis of radiotracers received a U.S. patent. He then started to design ways to administer and track radiotracers and their metabolites in whole plants. His early work showed how plants initiate defense mechanisms to ward off insect or other herbivores attacks. Then, by showing how plants reorganize their metabolism in response to these messengers, he started new investigations in other labs. He has since been invited to talk on his work all over the world.

After receiving his Ph.D. in nuclear and radiochemistry from Texas A&M University in 1978, Ferrieri joined BNL’s Chemistry Department in 1981. Among other contributions at the Lab, he has mentored 18 students and is the site director of the Nuclear Chemistry Summer School at BNL, a program sponsored by the American Chemical Society and funded by DOE. 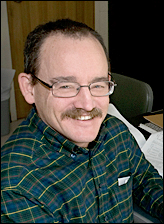 David Jaffe of the Physics Department was granted tenure based on his outstanding record of accomplishment in particle physics. In particular, he has made significant contributions by elucidating specific characteristics of quarks and their role in the Standard Model of particle physics through measurements in kaon physics, B physics and neutrino physics. He has played a leading role in the current national effort to determine the fundamental consequences of neutrino mixing and in establishing BNL’s role in forefront experimental programs in neutrino physics.

“David has contributed significantly to a number of important high energy physics measurements through his unerring physics sense and his strong technical abilities,” said Tom Ludlam, Physics Chair. “He has a long record of scientific achievement and leadership, and we expect him to continue to play a key role in shaping the future particle physics program at BNL.”

Notably, Jaffe played a central role in the Alternating Gradient Synchrotron rare kaon decay experiments, E787 and E949, that confirmed the discovery of the rare K+ → π+νν decay with low momentum pions, one of the most significant results in this field and one of the most difficult measurements in all particle physics. More recently, he has taken a lead in establishing BNL’s effort on the MINOS experiment studying neutrino oscillation and has developed breakthrough analysis techniques. Additionally, this group has taken a leading role in the Daya Bay collaboration, which is a major U.S.-China partnership to mount the most ambitious reactor neutrino experiment to date to determine the electroweak mixing parameter θ13.