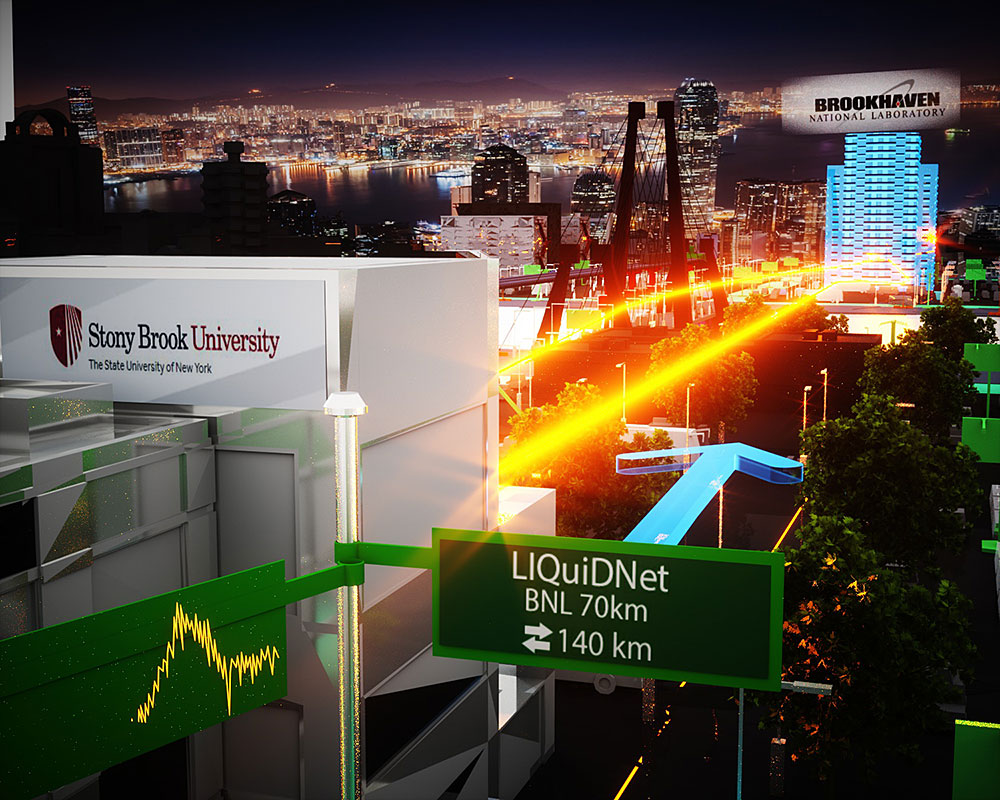 The burgeoning Brookhaven-SBU quantum communications infrastructure started with an experiment in 2019 that used existing fiber on the Brookhaven Lab campus to perform transmission of entanglement over approximately 18 km (11 miles). Now, the Brookhaven-SBU team has logged its latest success: a single-photon-level qubit communication in a twin-field configuration covering 140 km, representing the longest quantum communication link experiment in the United States. Image courtesy of Stony Brook University.

Currently, this marks the longest successful quantum communication link experiment in the United States and represents another noteworthy advancement by the Brookhaven Lab–SBU team. In only two years, the team’s efforts to develop a working long-distance quantum network—the foundation for the nation’s future quantum Internet infrastructure—have led to important “firsts” in U.S.-based quantum research. With this recent success covering 140 km, the team has substantially closed the gap between operational quantum communications infrastructure in the United States versus international work, especially that done in China, which has a strong research focus in this area.

“The Department of Energy is proud to host the longest form of quantum communication at Brookhaven National Lab and Stony Brook University,” said DOE Under Secretary for Science Paul Dabbar. “We must continue to build upon this advanced technology to further our nation’s efforts towards achieving a long-distance quantum network.” 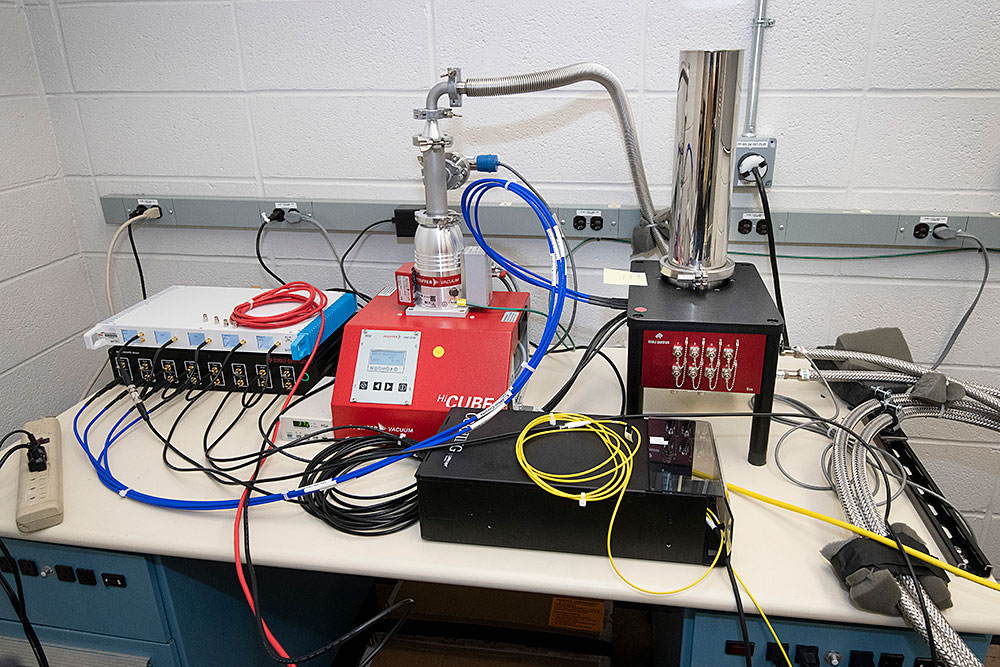 “This experiment clearly demonstrates the cutting-edge quantum Internet technology research happening at Stony Brook and BNL and the significance of our findings,” said Maurie McInnis, President of Stony Brook University. “The long and deep history of collaborations between our two institutions continues to yield some of modern society’s most exciting scientific discoveries, propelling us all forward."

Brookhaven National Laboratory Director Doon Gibbs added: “This is a tremendous forward stride that demonstrates our commitment to supporting the nation’s efforts in quantum research, especially toward facilitating a nationwide quantum Internet. We are proud of the innovative work that this team, with talented scientists and engineers from both Stony Brook and Brookhaven, continues to deliver.” 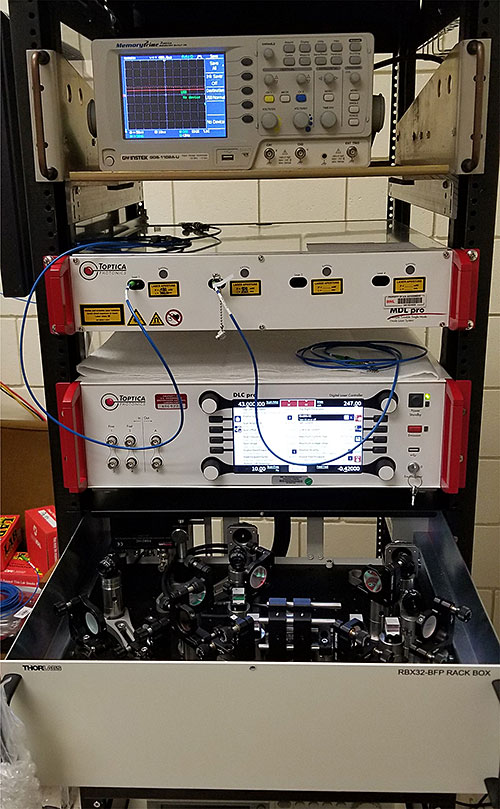 The latest experiment expands earlier work that established local entanglement-sharing quantum networks on the Brookhaven and SBU campuses. These two local networks were joined using two fiber quantum channels that connect “sister” quantum laboratories on both campuses. In two locations at SBU (dubbed “Alice” and “Bob”), the team is able to generate telecom-tuned single-photon-level polarization qubits. The two qubits streams then are transported in independent fibers (from Crown Castle Fiber, a provider of shared communications infrastructure) to a third station (“Charlie”) at Brookhaven, where they are detected using telecom nanowire single-photon counters. This infrastructure, called a twin-field quantum network, offers a promising approach toward achieving secure quantum communications over long distances.

According to Eden Figueroa, a joint appointee with Brookhaven’s Instrumentation Division and Computational Science Initiative and Quantum Information Technology group lead at SBU who oversees the quantum networking testbed project, an important aspect of the experiment is that the qubits are fully quantum memory compatible, produced at frequencies tuned to rubidium resonances in the telecom spectrum. This will allow for the deployment of quantum memory buffers, atom-filled glass cells that store quantum information and are manipulated using lasers to control their atomic states, in either side of the network to achieve secure quantum communication over long distances. These exchanges are already possible because the team has designed the infrastructure to be quantum repeater friendly from the beginning and at every aspect.

“We have already built several portable room-temperature quantum memory buffers,” Figueroa said. “Now, we have taken the next beautiful step: creating the long-distance quantum communication infrastructure to connect them.”

The Department of Energy is proud to host the longest form of quantum communication at Brookhaven National Lab and Stony Brook University. We must continue to build upon this advanced technology to further our nation’s efforts towards achieving a long-distance quantum network.

Presently, a viable quantum repeater is the single most valuable component missing from the mix of innovations needed to realize a working quantum Internet. A quantum repeater would function much like a “signal booster” does for a cellular network by amplifying digital transmissions over long distances. However, in an ideal quantum realm, the repeater would not lead to decoherence, or disruption of the qubits’ quantum entanglement state. This would assure the integrity of the information, affording an unprecedented level of communications security.

“The true security and capability of a quantum Internet will only be realized with working quantum repeaters,” Figueroa explained. “Our results have set the stage for an infrastructure to build a viable quantum repeater. We have all the right properties in the photons. Our nodes, fibers, and lasers have been tested and are compatible with quantum memories. Then, the quantum memories themselves are deployable. We now have all the compatible infrastructure. I am very excited about what’s coming next.”

More than a Quantum Connection

The Crown Castle telecom fiber that connects the Brookhaven and SBU labs provided the foundation for the recent 140 km (~87 miles) long-distance quantum communication over classical fiber systems, which has long posed a major challenge to the worldwide quantum networking community. Notably, Figueroa said the actual experimental setup with all its necessary equipment and infrastructure had only been complete and in place for roughly 10 days before the team took the initial leap to transmit the qubits from SBU to a superconducting single-photon detector at Brookhaven Lab. 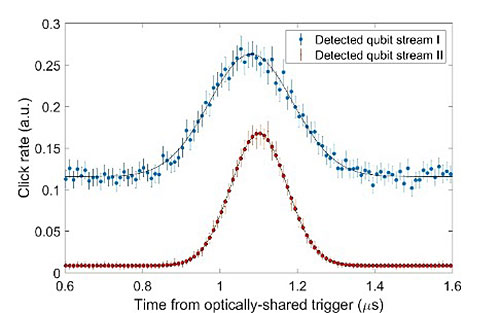 The measured histograms show the reconstructed (in quasi-real time) Gaussian temporal-wave function of the qubits generated at SBU and measured at Brookhaven Lab. They illustrate the successful single-photon-level qubit communication in a twin-field configuration.

“To our knowledge, this is the longest quantum communication link experiment in the United States, and it really shows the effectiveness of our collaborative research approach that has kept the notion of being repeater-compatible since the beginning,” he added.

Most importantly to Figueroa, the team’s work shows the value in creating connections between academia and national laboratories. In this case, it represents something quite literal: SBU and Brookhaven are physically connected, yet they share even more by way of the multiple staff who are contributing their expertise along the way.

“We’re working together. The synergistic collaboration between academia and the national labs is already there, and only together can we perform such challenging experiments,” he added.

This collaborative research has been funded by the U.S. Department of Energy’s QIS initiative in the Office of Advanced Scientific Computing Research (ASCR)’s recently launched quantum optical networks program.