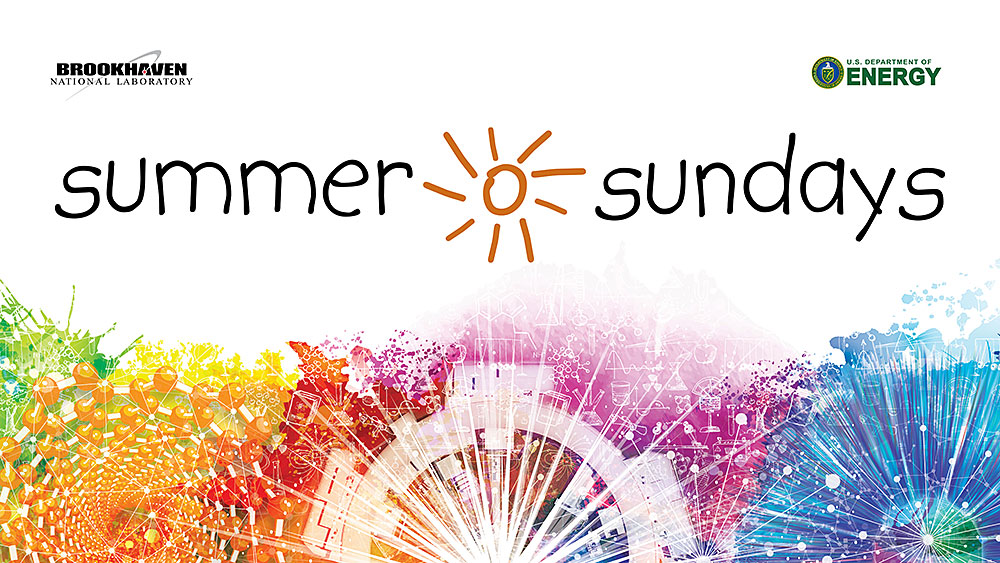 Brookhaven National Laboratory hosted a series of live online events in place of its in-person tour program for Summer Sundays 2020. Missed the live streams? Watch them below!

To continue this tradition in 2020 while limiting the spread of COVID-19, Brookhaven Lab moved its Summer Sunday program to an online format. Over three Sundays in August, the Lab hosted a series of live events, each of which included a guided tour of a Brookhaven Lab facility and a Q&A with the Lab’s scientists.

“The Summer Sundays program gives people an opportunity to visit Brookhaven, see our scientific facilities, and meet some of the people who work here,” said Kahille Dorsinvil, who coordinates Summer Sundays. “Every summer, we look forward to welcoming visitors during these lively and engaging events to share Brookhaven’s research. While it was disappointing that we wouldn’t have the chance to see our community members in person this year, we were excited to create a new learning experience that had the potential to reach an even broader community.”

The virtual Summer Sundays series launched on Aug. 16 at NSLS-II. Lisa Miller, a scientist at NSLS-II and the facility’s outreach manager, took viewers on a tricycle tour through the giant x-ray microscope. The tour stopped at four of the facility’s 28 experimental stations, called beamlines, as well as the accelerator tunnel. Viewers learned what makes each beamline unique and how they help scientists at NSLS-II conduct word-class science, some of which can’t be done anywhere else.

On Aug. 23, Summer Sundays continued with a virtual tour of CFN. Staff scientist Aaron Stein invited viewers to explore the nanoscale as he discussed some of the instruments that produce leading-edge science across CFN facilities. At each of the five tour stops, viewers saw different microscopes and research tools that enable CFN scientists and hundreds of visiting researchers each year to study materials and processes at the nanometer scale, which is as small as a billionth of a meter. Each facility at CFN offers advanced capabilities to research the unique properties of materials at the nanoscale, and viewers were introduced to how CFN researchers advance the science of nanomaterials.

Aaron Stein returned for the Q&A portion of the event, along with fellow CFN scientists Sooyeon Hwang, Ashley Head, and Christine Wang. The engaging discussion was moderated by Abram Ledbetter, chair of the CFN Users’ Executive Committee.

To close the virtual Summer Sundays series on Aug. 30, Brookhaven Lab gave a virtual tour of RHIC. Physicist William Jackson brought viewers to various stops around the RHIC accelerator complex, including the accelerator tunnel where ions circulate at nearly the speed of light, a liquid helium refrigeration plant that cools RHIC’s superconducting magnets to nearly absolute zero, and the STAR experiment—a 1,200 ton detector the size of a three-story house.

Nuclear physicist Gene van Buren moderated the Q&A session. Four RHIC scientists—Michiko Minty, Prithwish Tribedy, Alex Jentsch, and Angelika Drees—comprised the panel alongside University of Tennessee, Knoxville professor Christine Nattrass, a collaborator on the upcoming sPHENIX experiment at RHIC. In addition to RHIC science, the panelists covered audience questions on the Electron-Ion Collider, a future facility at Brookhaven Lab that will explore the building blocks of matter and the strongest force in nature.