The following feature story about the success of the ProtoDUNE-SP detector and its relevance for the international neutrino experiment known as DUNE was posted by the U.S. Department of Energy’s (DOE) Fermi National Accelerator Laboratory (Fermilab). Scientists from DOE’s Brookhaven National Laboratory made major contributions to the design, construction, and science program of ProtoDUNE, and are helping to guide the detector design, construction, and science program for DUNE. For more information about Brookhaven Lab’s involvement or to speak with a Brookhaven Lab scientist, contact Karen McNulty Walsh, 631-344-8350, kmcnulty@bnl.gov. 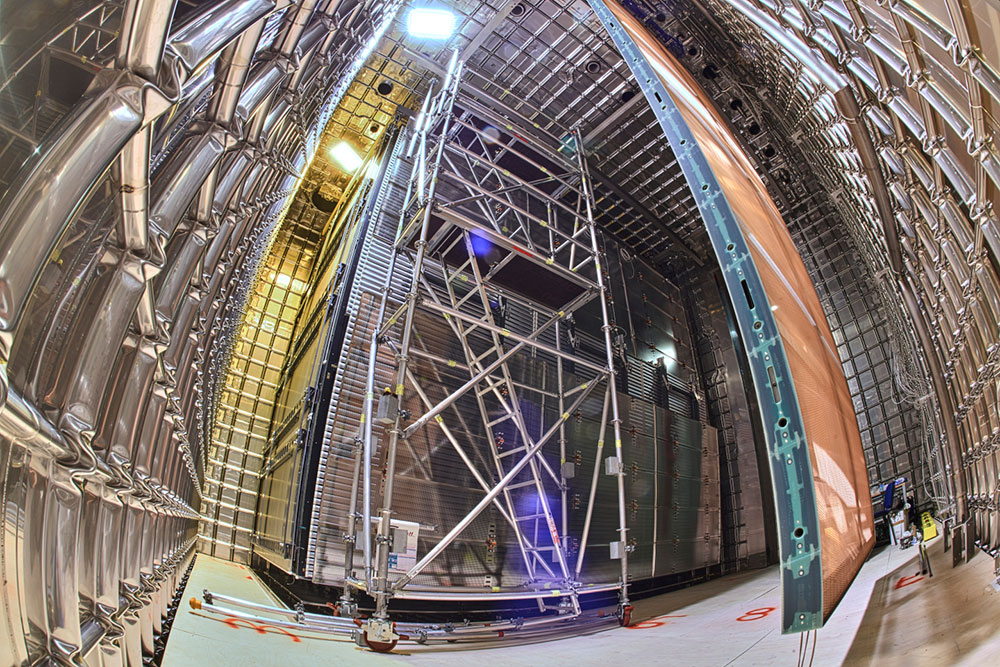 A wide-angle shot of the interior of the ProtoDUNE-SP (single phase) detector during installation at CERN. (Credit: CERN)

The DUNE collaboration has published their first scientific paper based on data collected with the ProtoDUNE single-phase detector located at CERN’s Neutrino Platform. The results show that the detector is performing with greater than 99% efficiency, making it not only the largest, but also the best-performing liquid-argon time projection chamber to date. Scientists now are using their findings to refine their experimental techniques and prepare for the construction of the international Deep Underground Neutrino Experiment at the Long-Baseline Neutrino Facility, a next-generation neutrino experimental program hosted by the Department of Energy’s Fermilab in the United States.

“These first results are great news for us,” said DUNE co-spokesperson Stefan Söldner-Rembold, professor at the University of Manchester in the UK. “They show that the ProtoDUNE-SP detector works even better than anticipated. Now we are ready for the construction of the first components for the DUNE detector, which will feature detector modules based on this prototype, but 20 times larger.”

DUNE is an ambitious international experiment that will measure the properties of tiny fundamental particles called neutrinos. Neutrinos are the most abundant matter particle in the universe, but because they rarely interact with other particles, they are incredibly difficult to study. There are at least three different types of neutrinos, and, every second, 65 billion of them pass through each square centimeter of Earth. As they travel, they do something peculiar: They change from one type to another. Scientists think that these neutrino oscillations — as well as oscillations involving antimatter neutrinos — could help answer some of the big questions in physics, such as the observed matter-antimatter asymmetry in the universe. DUNE will also look for neutrinos from supernovae and search for rare subatomic processes such as proton decay.

“ProtoDUNE-SP shows that we can scale up this type of technology to the size and resolution we need to finally put neutrinos under a very powerful microscope,” said Marzio Nessi, coordinator of the CERN Neutrino Platform.

Precisely measuring these oscillations will constrain and even rule out some theoretical models and open up new pathways to discover and explore rare subatomic phenomena. But to get those precise measurements, scientists need incredibly large, sensitive and reliable detectors.

“The ProtoDUNE results show that we have designed a detector that will allow us to reach our science goals in DUNE,” said Elizabeth Worcester, a scientist at the Department of Energy’s Brookhaven National Laboratory and DUNE physics coordinator.

DUNE is designed to reveal the nature of neutrino oscillations by firing an intense beam of neutrinos from Fermilab near Chicago through 1,300 kilometers (800 miles) of earth and into four giant subterranean detector modules located 1.5 kilometers deep at the Sanford Underground Research Facility in South Dakota. Two ProtoDUNE detectors at CERN — one based on a single-phase and the other based on a dual-phase liquid-argon technology — are a step toward building the huge DUNE detector modules, each filled with 17,000 tons of liquid argon. The DUNE Technical Design Report, published in February, is the blueprint for building these modules.

At CERN, DUNE scientists from around the globe used cosmic rays and an 800-GeV test beam to evaluate the ProtoDUNE-SP detector. The test beam from CERN’s SPS accelerator passed through two separate targets to create beams of electrons, protons and other types of particles. Particle detectors located just outside ProtoDUNE measured the energy and identity of these test-beam particles before they entered ProtoDUNE-SP. Inside the detector, delicate planes of wires interspersed with photon detectors hang inside 800 tons of transparent, liquid argon. When a passing particle interacts with the argon, it knocks loose electrons that are drawn by a high-voltage electric field over several meters to the wire planes close to the detector walls. From the signal on the wires, scientists create a 3-D image of the particle’s trajectory and can determine its energy and identity. By comparing this information from inside ProtoDUNE-SP to the known properties of the original test-beam particle, they were able to precisely calibrate the apparatus and optimize the complex reconstruction software.

Just like the quality of a photo varies significantly based on the quality of a photographer’s camera and editing software, the quality of physics data is only as good as the detector and its reconstruction tools. Scientists working on ProtoDUNE-SP have learned from past neutrino experiments and have achieved a level of performance that was previously impossible. All detector data contains small variations, called noise, that can sometimes be difficult to distinguish from the signals created by particles. This is a common problem in all physics experiments, and scientists are constantly thinking of innovative ways to improve data quality through a combination of increasing the strength of the signal and decreasing the amount of noise. In this first DUNE paper, scientists show how they were able to achieve a signal-to-noise ratio of 50 to 1, which was previously impossible to achieve for liquid-argon time projection chambers. They also evaluated the detector’s reliability and found that more than 99% of its 15,360 detector channels are functioning as they should.

“If some channels in a detector don’t work, scientists get gaps in their data,” said Tingjun Yang, a DUNE collaborator at Fermilab who led the ProtoDUNE data analysis. “Data analysis tools can help close those gaps, but there is a limit. The number of inactive channels in ProtoDUNE is less than 1%, giving us highly efficient event reconstruction. ProtoDUNE-SP shows that we can reach and exceed our physics goals.”

DUNE is supported by the U.S. Department of Energy Office of Science.

Fermilab is supported by the Office of Science of the U.S. Department of Energy. The Office of Science is the single largest supporter of basic research in the physical sciences in the United States and is working to address some of the most pressing challenges of our time. For more information, please visit energy.gov/science.

CERN, the European Organization for Nuclear Research, is one of the world’s leading laboratories for particle physics. The organization is located on the French-Swiss border, with its headquarters in Geneva. Visit CERN’s website at home.cern and follow them on Twitter @CERN.