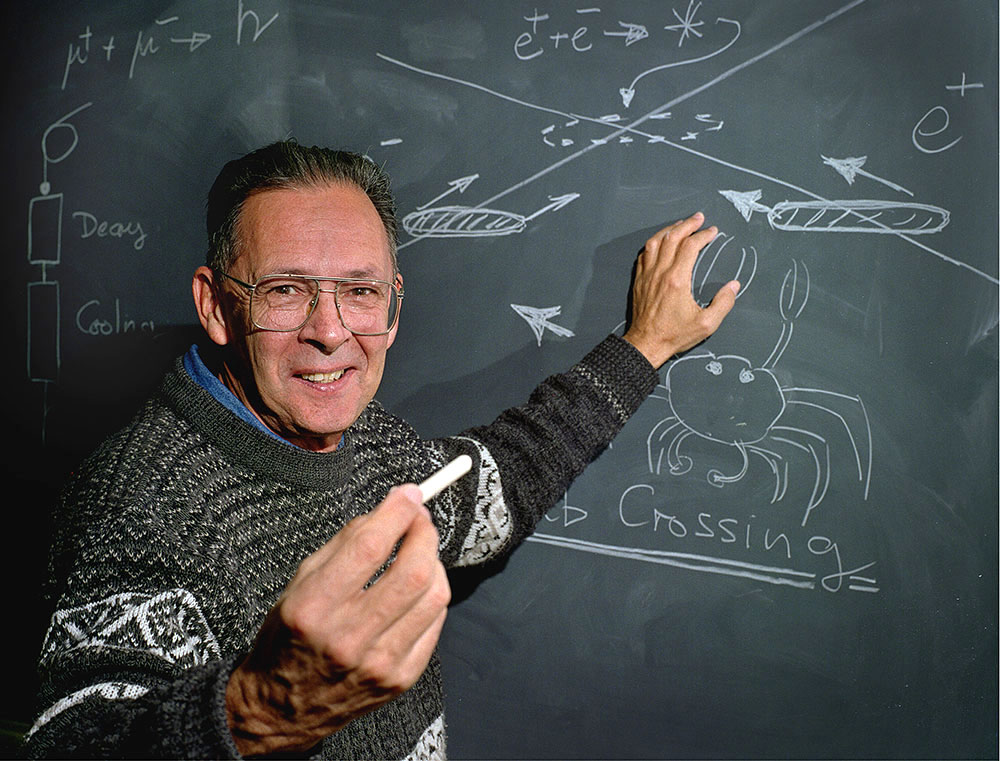 Robert Palmer explaining "Crab Crossing," one of his innovations, in 1999.

Physicist Robert Palmer has retired after 60 years of running experiments, making discoveries, and pushing particle and accelerator physics forward at the U.S. Department of Energy’s Brookhaven National Laboratory and beyond.

Palmer, 86, is looking forward to spending some time getting those decades jotted down in a memoir.

“It’s certainly very satisfying to look back at all this fun,” said Palmer, who first arrived at Brookhaven in 1960. “If I had a title for the memoir, it would be ‘The Fun of Doing Physics.’ People are often frightened about physics in school and think it’s awfully hard—and there is a lot of studying one has to do—but when you’re actually doing it, it’s very exciting and it’s a lot of fun.”

One of the most famous of the experiments in which he played a role was the 1964 discovery of the Omega-minus particle at Brookhaven’s Alternating Gradient Synchrotron (AGS).  He shared the 1993 American Physical Society’s W.K.H. Panofsky Prize in Particle Physics with former Lab director Nicholas Samios, who he met on his second day at Brookhaven, and fellow physicist Ralph Shutt, for the experiment that confirmed that important particle. 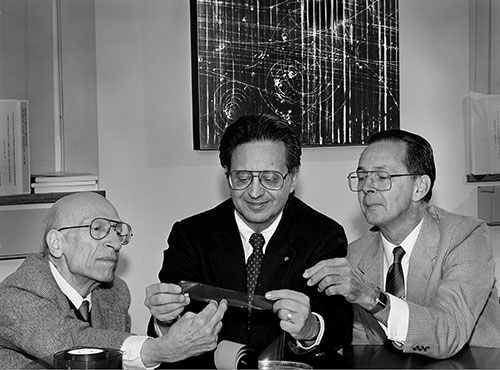 With that milestone and other notable career highlights, Palmer finds that the singular moments he remembers had a tendency to occur in the middle of the night, which was often when necessary equipment was available. So many times, at least for a moment, he and a colleague or two would be the only ones in the world who knew the result of an experiment or problem solved.

“I want to write about these middle-of-the-night-moments, when one’s finally got it,” Palmer said. “And try to talk about the human things, like the ‘Coca-Cola can theory’–things which would never get into a paper.”

He was recalling the night in which he and Samios were trying to fix the beamline to be used for the Omega-minus experiment. A “bump” on the plot left Palmer wondering whether particles were bouncing off a Coca Cola can, left in the beam pipe, or other piece of metal. The scientists closed the machine down and entered the AGS tunnel, finding an end section of the beam pipe that was smaller than the rest of the line to be the culprit–an after midnight “got it” moment.

“Bob Palmer is one of the most imaginative and original physicists that I know of,” said Samios, who Palmer regards as a mentor, teacher, defender, and friend. “He has made major contributions to the field of physics itself, detectors and accelerators.

Palmer’s longtime interest in physics began at a young age. As someone who is dyslexic, spelling and writing was not his forte in school, but he performed well in science and mathematics.

“It’s said that people who are dyslexic are incapable of staying inside the box,” he said. “But thinking outside of the box is an advantage in science. I’m endlessly going off on tangents and thinking of what-ifs. That’s just in the way I work.”

That mentality proved to be worth it over the years as he dove into new projects, Palmer said.

“The ‘fun’ has been the new problems in each field,” he said.

Palmer became a senior physicist in 1974 and Associate Director for High Energy Physics Research in 1983. Between those years, he contributed to the discovery of neutral currents at Europe’s particle physics laboratory CERN, the charmed baryon at Brookhaven in 1975, and direct single photons at CERN in 1978. His focus began to turn to accelerator physics with his invention of the inverse free electron laser in 1972. In 1973, Palmer proposed a method, called longitudinal stochastic cooling, soon after known as the Palmer method, of correcting the momentum spread of particles as they circulate around an accelerator. The method has been used at CERN.

From 1980 to 1983, Palmer and his associates developed alternate magnets for Brookhaven’s troubled Colliding Beam Accelerator Project, then known as ISABELLE, and in 1990 he started work on magnet development at the Superconducting Super Collider (SSC). Both of these projects were subsequently canceled, but many superconducting accelerator magnets that followed can be traced back to Palmer’s ideas. For example, he introduced the 2-in-1 magnet, in which two magnets are inserted into one block of iron, rather than two, which represents savings in cost and space and are used in the Large Hadron Collider (LHC) at CERN.

From 1987 to 1990, and from 1991 to 1996, Palmer held joint appointments at Brookhaven and the Stanford Linear Accelerator Center, where he invented ‘Crab Crossing’. In 1990, he worked on magnet development at the SSC. After returning to Brookhaven in 1991, Palmer was named head of the Laboratory's Center for Accelerator Physics (CAP). He helped found the Accelerator Test Facility at the Lab, which started its run in 1992 and continues to operate today.

For about 20 years, Palmer pursued an interest in muon colliders, helping to advance the concept. He worked closely with former Lawrence Berkeley National Laboratory director Andy Sessler and others through the Muon Collider Collaboration, a cohort of more than 100 members from more than two dozen institutions.

More recently, Palmer contributed to Brookhaven’s work on the Electron-Ion Collider for the last five years, a project he said is now in “comfortable hands.”

“Bob Palmer is one of Brookhaven’s giants—an icon, who had made enormous, creative contributions across physics and accelerator science, moving us forward in surprising ways,” said Brookhaven Lab Director Doon Gibbs. “As I came to know him, I saw that he did these things because he loved doing them—he had a passion for discovery. It’s a pleasure to thank and congratulate Bob for his many contributions to science and the lab, and to also say that we look forward to working with him going forward in his Emeritus role— his impact will continue to resonate in the field for decades to come.”

Other awards and achievements

Palmer earned a Ph.D. in physics at Imperial College London in 1959.

He was elected as a member of the National Academy of Sciences in 2008. In 2010, he won the Advanced Accelerator Concepts Prize for “outstanding leadership in the muon collider program and pioneering many concepts in advanced accelerator science.”