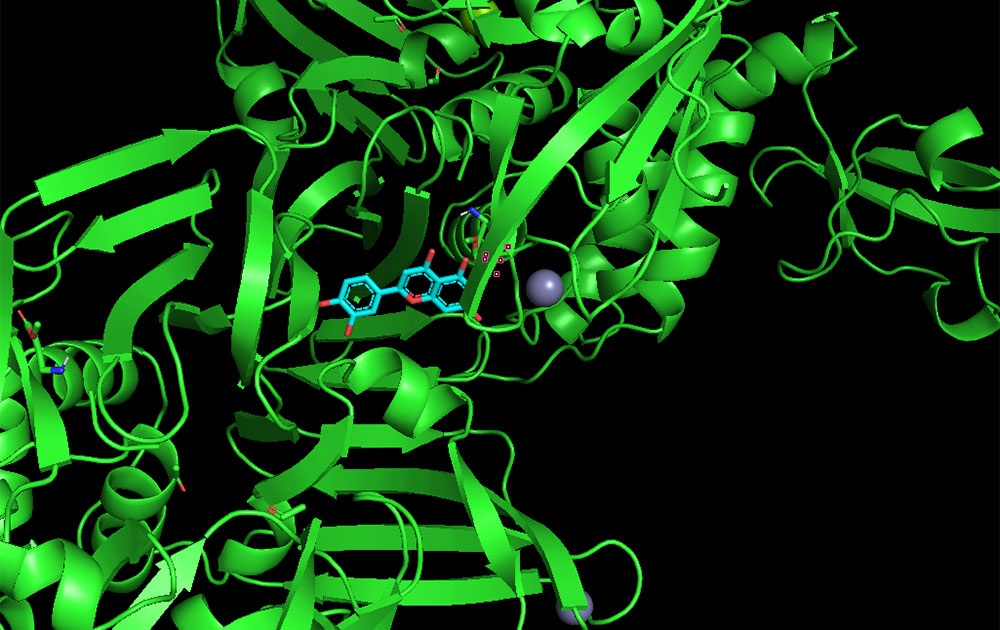 Students working remotely during virtual fall internships at Brookhaven Lab helped identify molecules that may work to inhibit key functions of the virus that causes COVID-19. This image shows a computational model of a small molecule (blue and red stick figure) bound to the active site of the virus's Papain Like protease (PLpro, the green "ribbon" background molecule).

Two students working under the mentorship of Desigan Kumaran, a structural biologist at the U.S. Department of Energy’s Brookhaven National Laboratory, have helped to identify molecules that could potentially lead to new antiviral drugs for treating COVID-19. Though the students conducted their fall 2020 internships remotely, the potential of their work is firmly planted in the real world and could have lasting impact.

“Having this experience—the mentorship and the relationships—is no less than astounding!” said Huzaifa Kamran Khawaja, a valedictorian community-college graduate of Napa Valley College, now a junior studying molecular biology at the University of California, Berkeley, who participated in the research through DOE’s Science Undergraduate Laboratory Internships (SULI) program. “You’re not just a regular student; you are not just getting information—you are contributing to the field of science.”

Ricca Gonzalez, who just graduated with an Associate’s degree in business from Northampton Community College in Bethlehem, Pennsylvania, and participated through DOE’s Community College Internships (CCI) program, agrees. “I’ve learned so much in these last three months, including software and coding and a lot about biology that I didn’t know before—the specifics down to the molecular level. From this experience, I’m going to continue on my scientific journey. I don’t have a big science background and I want to expand on that,” she said.

Both students began their projects by studying and downloading structures from the Protein Data Bank (PDB) of proteins that play key roles in the lifecycle of the virus that causes COVID-19. They mined databases of drugs already approved for use against other diseases by the U.S. Food and Drug Administration (FDA), looking for ones they thought might be effective against their chosen viral targets. To narrow their search among 20,000 possible drugs, they drew on knowledge gleaned from reading previous studies and learning as much as they could about their specific proteins. Then they used computational modeling techniques to test whether their candidate molecules might block the functions of their proteins.

The process is somewhat like a molecular matching game—finding drug molecules of a particular size, shape, and chemistry that will fit with the functional parts of the target proteins.

“I like to think of it as Legos,” Gonzalez said. “When you put Legos together, you have to find a specific piece so they bind perfectly.”

Proteins work that way too, fitting together with the molecules they interact with in the cell to do their particular jobs. If you can find a different piece that also fits well—or, ideally, even better—you could block the normal interaction and disable the virus. 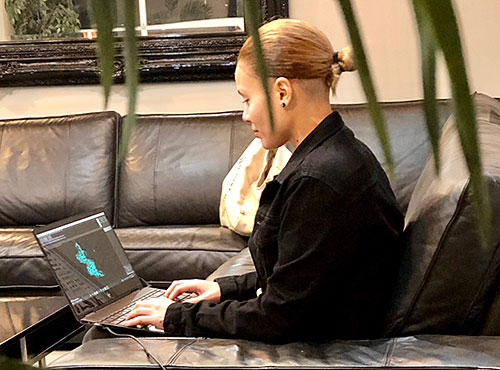 Ricca Gonzalez at home in Pennsylvania works on her laptop to analyze results from molecular docking studies. The studies show how different drug molecules might fit together with PLpro, a viral protease enzyme, to stop its protein-cutting action.

Gonzalez’s target was a viral protease called Papain Like protease (PLpro)—an enzyme that acts like a molecular scissors to cut up pieces of newly synthesized viral proteins. As mentor Desigan Kumaran explained, when the virus infects a cell, it hijacks the cell’s molecular machinery to transcribe the virus’s RNA genetic code into two long protein chains. This protease (and another called MPro) cuts these long chains into smaller functional proteins needed to build new copies of the virus. Disabling the scissors would prevent infection from spreading.

As Gonzalez searched the FDA database for potential protease inhibitors and other antiviral agents, she identified about 30 candidate drugs that might block PLpro’s active site—the key part of an enzyme that binds to its molecular target to carry out its enzymatic action, in this case, protein cutting.

For each candidate drug, she downloaded the molecular structure file and did some coding/programming conversions to put those files into a format that could be modeled by a program called AutoDock Vina. AutoDock Vina simulates how the drug would “dock,” or fit, with PLpro’s active site, providing a theoretical estimate of how strongly the two molecules bind together (in terms of binding energy). The program also generates visualizations of the molecular interactions involved in the binding, showing which atoms are precisely interacting to hold the “Lego” pieces together.

Through painstaking studies, Gonzalez identified one candidate drug with “decent” binding affinity, which can serve as a starting point for refining drug design (see below). 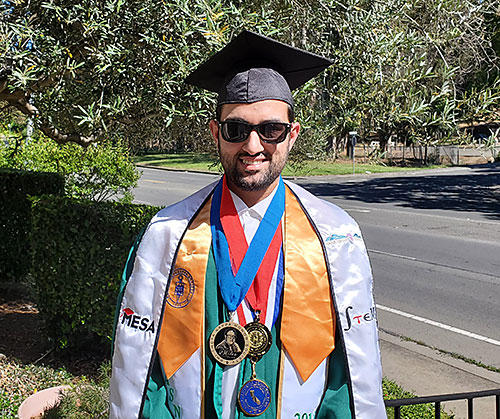 Huzaifa Kamran Khawaja, at his graduation from a community college program at Napa Valley College, is now a junior studying molecular biology at the University of California, Berkeley.

Meanwhile, Huzaifa Kamran Khawaja was learning everything he could about a different coronavirus protein. His target, known as Nucleocapsid, or N, attaches to each copy of viral RNA generated by an infected cell. Nucleocapsid acts as a stabilizer so the RNA copies can be packaged into completed virus particles. When those copies burst out of that cell they go on to infect another—or another person unlucky enough to inhale the viral particle. Without the N stabilizer, the RNA would go nowhere and the infection would be stopped.

“I’m looking for a ligand, or small molecule, that will bind to the active site on Nucleocapsid to stop it from binding to the RNA,” Khawaja said.

He uses a lock and key analogy where the target protein is the lock and the drug molecule is the key.

“We’re trying to find a key that fits into that lock before it binds to the RNA, so that prevents another key [the portion of the RNA that normally interacts with Nucleocapsid] from inserting into the lock.” Small drugs that mimic the virus RNA but have stronger binding affinity could outcompete the virus to keep the lock blocked.

To find potential blockers, Khawaja began with the same FDA database search and molecular docking approach as Gonzalez. He started by looking for already-approved drugs that might bind to Nucleocapsid’s active site and conducted docking studies to understand its binding properties.

“I started looking at a few FDA-approved drugs that were working for HIV (the AIDS virus) and other types of viruses. I found there were certain components of those ligands that, if they were present, made it bind very strongly—electronegative components like phosphate groups (phosphorus and oxygen) and aromatic compounds (ring structures),” he said.

Using these clues about chemistry, atomic arrangements, and net electrostatic charge, he then searched for other small molecules that had those components and tried to dock those.

“I tested about 54 ligands with the docking program, and gradually tweaked the molecules to improve their binding affinity with Nucleocapsid,” Khawaja said.

In the end, he identified ten molecules with reasonable binding energy that were “saturated” with components designed to enhance binding. 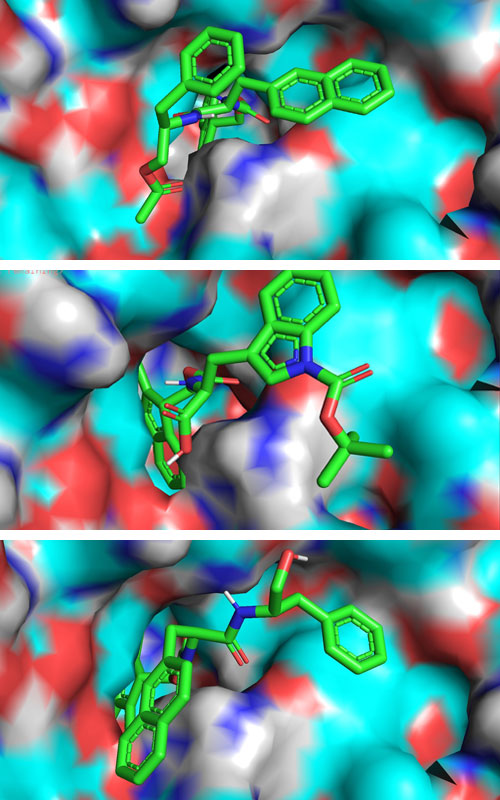 Khawaja conducted docking studies to see how existing drugs might bind with his viral protein target (an RNA stabilizer protein, shown here as the red, white, and blue background), and used what he learned to find other small molecules with features that might enhance binding and inhibition of the virus protein.

With “hit” molecules identified from both Gonzalez’s and Khawaja’s computational modeling studies, Brookhaven’s Kumaran will next take the molecules into the laboratory for some real-world experiments.

“In the case of Ricca’s ligand, we can do a biochemical assay to see if the molecule inhibits the PLpro enzyme’s activity in vitro,” Kumaran said. “We’ll add this ligand into the enzymatic reaction mixture and see if it inhibits the enzyme’s proteolytic activity. For Huzaifa’s ligands, we can do experimental binding assays using thermofluoresis,” which measures how much energy it takes to pull the ligand and target apart, he said.

For any molecules that show promise in those biochemical experiments, the next step will be x-ray crystallography structure studies at Brookhaven’s National Synchrotron Light Source II (NSLS-II), a DOE Office of Science user facility well known for its protein structure studies—and many other types of experiments. By measuring how x-rays scatter off the samples, scientists can determine the atomic-scale 3D structure of the ligand molecules bound to their protein targets. The results provide detailed maps of the positions of individual atoms and information about the molecular interactions between the molecules.

“We can then use that information to further redesign the ligand to enhance its binding so it works even better—and ideally get it to work at a low enough concentration to be moved into preclinical and clinical trials, the next steps of testing it as a possible drug,” Kumaran said.

Kumaran is proud of both students and their accomplishments in their virtual internships. “They both did an excellent job,” he said.

“I’m really, really happy that we were able to recruit Ricca and that she was able to do so much coming from a very different, business background. It’s not easy coming into biology and understanding the virology, the biochemical processes, and then the docking,” he said.

Kumaran and Gonzalez both acknowledged how Khawaja, with his molecular biology background, helped his fellow intern, especially at the beginning of the internship. Perhaps Gonzalez’s newfound combination of biology and business skills will serve her well in a future career, maybe in the pharmaceutical industry? For now, she said, “I will transfer into a program in biology. I’m looking for something to fit me.”

Both interns were enormously grateful for the opportunity to work on such important research.

Khawaja summed it up as follows: “I am a community-college transfer student and I thought I would never ever get a research position. I don’t even think I had the capacity to dream it, and here I got this opportunity to work with amazing people at Brookhaven. I feel really proud to be part of this organization—Brookhaven Lab, SULI, the biology department. And I don’t even think thank you would suffice to acknowledge the way Dr. Kumaran has helped both of us in this process. It’s not only about what we learned, but how we can use this experience in the future in whatever field we go into.”

SULI and CCI internships are supported by the DOE Office of Science, Office of Workforce Development for Teachers and Scientists (WDTS). Desigan Kumaran’s COVID-19 research is funded by Brookhaven’s Laboratory Directed Research and Development program and by the National Virtual Biotechnology Laboratory (NVBL), a consortium of DOE national laboratories focused on response to COVID-19, with funding provided by the Coronavirus CARES Act, distributed by the DOE Office of Science.