Aerosol, Cloud, and Climate: From Observation to Model 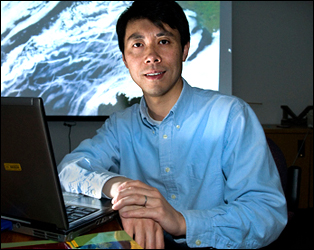 In the last 100 years, the Earth has warmed by about 1ºF, glaciers and sea ice have been melting more quickly than previously, especially during the past decade, and the level of the sea has risen about 6-8 inches worldwide.

Scientists have long been investigating this phenomenon of “global warming,” which is believed to be at least partly due to the increased carbon dioxide (CO2) concentration in the air from burning fossil fuels. Funded by DOE, teams of researchers from BNL and other national labs have been gathering data in the U.S. and internationally to build computer models of climate and weather to help in understanding general patterns, causes, and perhaps, solutions.

To learn more about the challenges in understanding the properties of aerosols and representing them in global models, join Jian Wang, a scientist in the Environmental Sciences Department, as he gives the 457th Brookhaven Lecture, titled “Aerosol, Cloud, and Climate: From Observation to Model.” The free lecture, open to the public, will be held in Berkner Hall at 4 p.m. on Wednesday, May 12. Visitors to the Lab 16 and older must carry a photo I.D.

To join the speaker for supper at a restaurant off site after the talk, contact Linda Satalino, lsatalino@bnl.gov, Ext. 2383.

In his talk, Wang will discuss the complexity of atmospheric aerosols and the computational constraints that make representing them in global models accurately so challenging. He will present results from two field observations made by a BNL team that show how atmospheric aerosols can form cloud droplets and thereby influence climate. He will also examine the best, simplest ways to represent these effects in global models.

The Intergovernmental Panel on Climate Change considers the indirect effects of aerosols to be the most uncertain components in the climate system. As Wang will explain, these uncertainties need to be substantially reduced in order to develop the most appropriate strategies to adapt and mitigate future climate change.

Jian Wang, who came to BNL in September 2002 as a Goldhaber Distinguished Fellow, earned his B.S. in physical chemistry at the University of Science and Technology of China in 1996, and his M.S. and Ph.D. in chemical engineering at the California Institute of Technology in 1998 and 2002, respectively. He joined the Environmental Sciences Department as an associate scientist in September 2005, with an affiliated faculty appointment in the School of Marine & Atmospheric Sciences at Stony Brook University.

Wang holds two patents, with another pending, and among many other activities, he is an editor of Aerosol Science & Technology. He was named a scientist in October 2008.