NSLS researcher Peter Siddons can't remember the first time he approached the BNL Instrumentation Division for assistance, but he has been a steady customer and collaborator for at least 20 years. And recently, he has relied on the division's expertise and services more heavily.

Siddons, who leads the National Synchrotron Light Source Experimental Systems Detectors section, mainly collaborates with Instrumentation staff on developments in x-ray detectors for synchrotron radiation applications. He is one of many scientists at Brookhaven who seek their assistance. 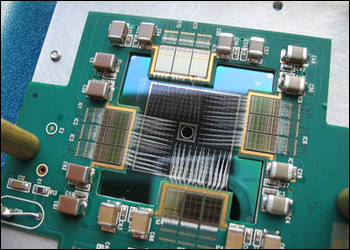 An early version of the Maia detector, currently being used by the New Jersey Institute of Technology for x-ray holography experiments.

"I have been interested in x-ray detectors for a long time, and Instrumentation has the infrastructure to do something meaningful with my ideas," he said. "I make use of their microchip design expertise, their silicon detector foundry, their printed circuit board facility, electronics assembly, and their software expertise."

When he has a concept for a new experimental project, Siddons consults with the appropriate Instrumentation staff member and they jointly flesh out the project details. When necessary, division head Velkjo Radeka is brought into the planning process to ensure that sufficient resources can be made available. Often a large part of the Instrumentation Division is involved, sometimes as many as 12-15 staff members with different specialties.

Over the years, Siddons has served as an intermediary of sorts between NSLS and Instrumentation staff. When an NSLS scientist has a problem taking a measurement, Siddons interprets the concern into a concrete proposal for a new detector project. He's found that the most successful projects are those where the scientist remains fully engaged as the instrument moves from concept to reality. The end user and Instrumentation developer both benefit from close contact as the project proceeds and the experimental goals and technological constraints become clearer through discussion. Since Siddons has worked on both sides, he can often help with this initial connection. He points out that a typical development can take several years to bring to fruition, requiring a significant commitment on both sides.

Often this works in reverse. An Instrumentation scientist may have a good idea for a novel detector or circuit, and Siddons realizes that it could solve a problem at the NSLS. He then tries to make the appropriate introductions and move things forward.

One example of this is the Maia spectroscopy system, a high-resolution, high-speed detector composed of about 400 individual detectors. It is designed to be used at the NSLS with an x-ray microprobe. Together, these tools allow scientists to identify the spatial distribution of different chemical elements in a sample, such as minerals in a slice of rock.

The original inspiration for the Maia system was one of Instrumentation’s custom integrated circuits, developed for a commercial medical imaging instrument, and Siddons realized that the circuit could be paired with a new spectroscopy detector he was developing for the NSLS. While describing an early version of this detector at a conference, an audience member, Chris Ryan from Australia's Commonwealth Scientific and Industrial Research Organisation (CSIRO), suggested that a combination of this detector and high-speed custom computers being developed at CSIRO could yield a major advance in these instruments. The resulting collaboration produced the Maia system, which reduces the data acquisition time for elemental maps by at least a factor of 100.

Another good example, invented by Instrumentation scientist Pavel Rehak (who passed away in November), is the x-ray active matrix pixel sensor (XAMPS) imaging detector system, an x-ray detector that will take only a few milliseconds to render a one-megapixel image. It is under development by Siddons and his collaborators for use at the new free-electron laser x-ray source recently constructed at SLAC National Accelerator Laboratory. It was originally envisioned as an electron microscopy detector, but its potential as an x-ray detector was clear and it was a very good match to the SLAC machine properties.

Another project, an ongoing development funded by NASA, is an effort to create large arrays of silicon drift detectors. The results are highly likely to be useful at the NSLS, and Siddons is working with NSLS user Trevor Tyson from the New Jersey Institute of Technology and Instrumentation's Gianluigi De Geronimo to adapt the NASA concept to the needs of the NSLS. It will take the Maia concept to the next level, providing larger area sensors with better resolution and high data-acquisition rate capabilities, all three limitations of the current systems.