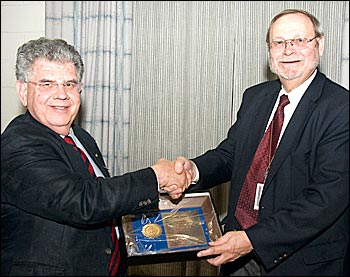 For 50 years, the Alternating Gradient Synchrotron (AGS) has been making scientific breakthroughs, over half that time under the supervision of Derek Lowenstein. In acknowledgement, Brookhaven’s recent “90-50-10” celebration, which recognized the AGS’s 50th anniversary, also commemorated Lowenstein’s contribution. During the event’s dinner, Lowenstein was presented with an Appreciation Award from the U.S. Department of Energy (DOE).

At the end of the meal, Dennis Kovar, the DOE Associate Director of Science for High Energy Physics, stood to address the audience. As Kovar spoke, Lowenstein said he began thinking, “This sounds like it’s aimed at me.” Sure enough, Kovar concluded by presenting the Appreciation Award on behalf of William Brinkman, director of the DOE Office of Science, who could not attend.

Upon receiving the award, Lowenstein found himself speechless. “I was totally taken by surprise that this happened,” he said, adding, “I think it’s a great honor to be acknowledged by the DOE Office of Science.”

Although he stepped down as chair in December 2009, Lowenstein continues to work within the department as Associate Chair for Accelerator Applications and Education.

In his new role, Lowenstein works on projects like the Center for Accelerator Science and Education (CASE), a collaboration with Stony Brook University. CASE aims to establish a formal degree-granting program at Stony Brook in accelerator physics and engineering, using Brookhaven staff as mentors and teachers.

“This is a joint Stony Brook – Brookhaven effort,” said Lowenstein.

Another project involves the development of proton and carbon machines for cancer therapy. Beams of protons or carbon ions have the potential to kill targeted cancer cells while minimizing damage to normal tissue, which is a side effect of x-ray therapy.

Whether cultivating the next generation of scientists or curing cancer, one thing is certain: Lowenstein won’t be celebrating his award with a vacation.