The following story was originally published on April 2, 2020, by the Center for Advanced Bioenergy and Bioproduct Innovation (CABBI), a U.S. Department of Energy-funded Bioenergy Research Center led by the University of Illinois Urbana-Champaign’s Institute for Sustainability, Energy, and Environment (iSEE) and the Carl R. Woese Institute for Genomic Biology. Scientists at the U.S. Department of Energy’s Brookhaven National Laboratory are partners in CABBI. 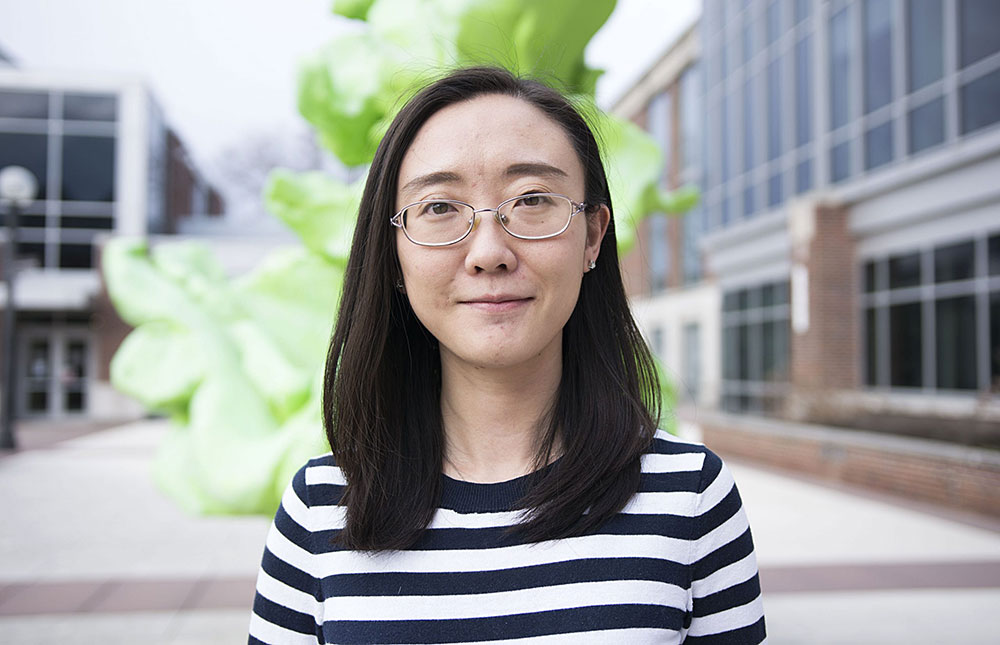 Growing up in a small town on the east coast of China, Yingqi Cai was fascinated with plants.

Her mom loved gardening, and their home was filled with greenery. Cai would sit and stare at the plants, waiting in vain to catch the exact moment they flowered.

“It was always the next morning, when I woke up, that I saw the flowers coming out, a new bud,” she said.

Plants, she said, are “just so cool. They don’t eat, they can’t move, but they have found their own ways to survive.”

That fascination led Cai to study biology at Shandong Agricultural University in China, where she took an interest in plant metabolism and the vast array of organic compounds produced from photosynthesis. She decided to pursue graduate research at the University of North Texas, studying plant lipids, and earned her Ph.D. in biochemistry and molecular biology in December 2018. 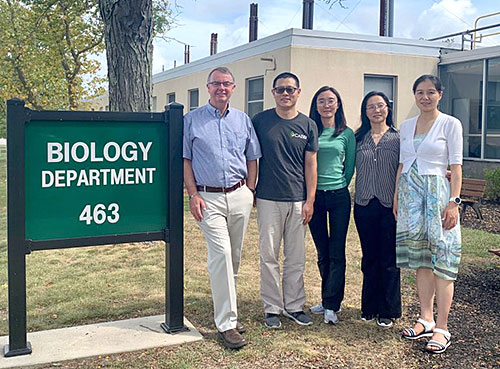 The Shanklin team is focused on increasing lipid production in plant vegetative tissue to provide a sustainable alternative for the growing demand for fossil fuels: renewable biofuels made from perennial grasses.

Each plant is like a small factory converting sunlight and carbon dioxide into lipids. Those plant lipids — oily compounds like triacylglycerols (TAG) that plants use to store energy — have become an important target for renewable bioenergy feedstocks.

“Plant lipids are among the most energy-rich compounds found in nature. They can easily be converted into biodiesel,” Cai said.

But lipids are mostly produced in seeds, which are used for food production and animal feed. So scientists turned to other parts of the plant that are typically considered waste products: leaves and stems, which constitute most of the biomass of the crop.

“If we can increase the production of lipids in leaves and stems, we can use these abundant vegetative tissues as a platform to produce biodiesel,” Cai said.

So far, researchers have made progress increasing lipid content in vegetative tissue by taking factors that make oil in seed and placing them in the leaves and stems. The challenge is that high lipid content is associated with inhibited plant growth, probably because energy normally used for leaf and stem growth is shifted to oil production.

“We were able to make a plant that accumulated a lot of oils in vegetative tissue. However, the plants are small — smaller than the normal plant,” she said.

Through her CABBI research on plant genetics, Cai has identified promising proteins that may be able to increase lipids in vegetative tissue without stunting plant growth.

“If we can combine those two factors, one making oil and one making a bigger plant, then we can have a normal size plant that has a lot of oil,” she said.

Cai had never been to the United States before enrolling at North Texas. She chose that university because her Ph.D. advisor, Professor Kent Chapman, was known for his work with plant lipids. But she also was eager for a new challenge halfway around the globe.

“It’s more like a brave new world to me. I grew up in China, many of my friends attended graduate school there — I knew exactly what life would be like there,” she said. “I wanted something that I’d never tried before.”

Cai’s graduate research helped advance scientists’ understanding of lipid droplet formation in plant cells. Lipids made in cells are packaged into small droplets for storage, but that process isn’t well-understood, she said.

Cai and Chapman studied previous research about the process in human and animal cells, to see if plants might have similar machinery. They focused on proteins that exist in both animal and plant cells and are involved in lipid droplet formation. They found that plants had evolved protein isoforms with specialized functions in different plant tissues: Some proteins make bigger lipid droplets in seeds, while others make smaller lipid droplets in leaves.

“We were the first ones to identify these important proteins in plant cells and add some insight into this process,” Cai said.

That work was useful to her current research as well.

“If we can package and store more lipids into lipid droplets, and make this process more efficient, then we can accumulate more oil in plant cells,” she said.

Cai joined Shanklin’s lab in January 2019, shortly after completing her graduate work. She had been impressed by a presentation Shanklin gave on sugar and lipid homeostasis, and wrote to him asking if she could work in his lab as a postdoctoral researcher. Luckily, he had an opening.

“I knew I wanted to do science and stay in academia,” said Cai, who enjoys the encouraging environment in the lab. “Doing research is all about new ideas, and he encourages new ideas all the time. He gives you the freedom and support to do whatever you are interested in.”

Cai loves science — and teaching others about it — and hopes to land a faculty position in the U.S. or China after her postdoctoral appointment ends. At North Texas, she worked as a teaching assistant and helped Chapman design courses that give undergraduates real-world research experience.

In addition to her current research at Brookhaven, she works as an Assistant Features Editor for The Plant Cell, writing “In Brief” articles summarizing recent papers published in the journal. She is passionate about communicating plant science to a broader audience.

Non-scientists don’t always understand the time and labor that goes into research discoveries, she said. Posters and published papers highlight the successes, but not the failures that are common to anyone’s research — or the unexpected results.

“You don’t make any big breakthroughs in one year. It takes a long time for a plant to grow,” she said. “We usually need to try many times to finally get something to work. It can be frustrating sometimes. But many interesting findings are from unexpected results.”

When she’s not working, Cai enjoys relaxing with her husband at their Long Island home, cooking or watching a movie together. She also likes trying out new restaurants or seeing the sights in nearby New York City.

“But I like the beach better,” she said. “I’m a quiet person. If I have one day off, I really want to just sit at home and get a cup of coffee and watch TV.”