Scientists equipped a pickup truck with a suite of atmospheric research instruments to study microclimates across the Nation's cities. 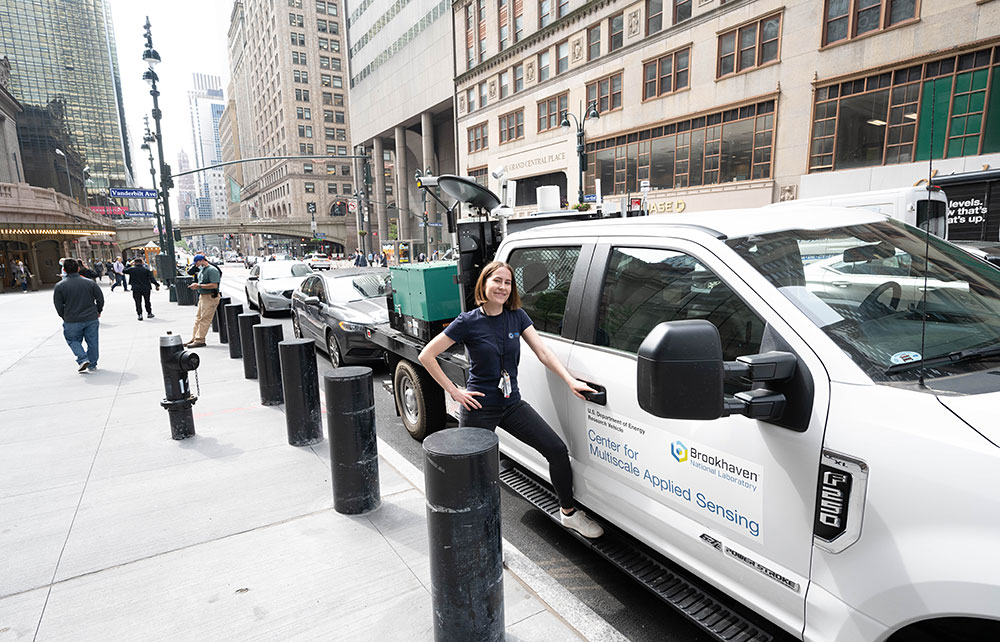 Researchers at Brookhaven's Center for Multiscale Applied Sensing have integrated a suite of atmospheric measurement instruments into a pickup truck, creating a mobile observatory that captures precise, local climate data across entire cities. Katia Lamer, a research associate in Brookhaven's Environmental and Climate Sciences Department, is pictured here with the mobile observatory in Manhattan.

Atmospheric scientists at the U.S. Department of Energy’s (DOE) Brookhaven National Laboratory have deployed a unique method of collecting climate data in cities, aiming to address infrastructure and energy needs across the Nation. Rather than relying on stationary instruments, researchers at Brookhaven’s Center for Multiscale Applied Sensing (CMAS) have integrated sophisticated research tools into a pickup truck, creating a mobile observatory that captures precise, local data on wind, temperature, rain, and clouds across entire cities.

“For decades, climate research in the U.S. has focused on natural environments such as oceans and plains,” said Katia Lamer, a research associate in Brookhaven’s Environmental and Climate Sciences Department. “CMAS has recruited climate experts to pivot their expertise to monitoring and understanding urban microclimates, which have unique and uneven responses to climate change. We want to identify vulnerable areas and evaluate mitigation strategies in relation to local weather conditions.”

From towering skyscrapers to densely packed residential neighborhoods, the diverse features of cities create complex atmospheric conditions that impact air temperature, air quality, and more. Scientists suspect these urban microclimates vary not only from surrounding suburbs but also between different areas of a city itself. But measuring these local characteristics has proved challenging. 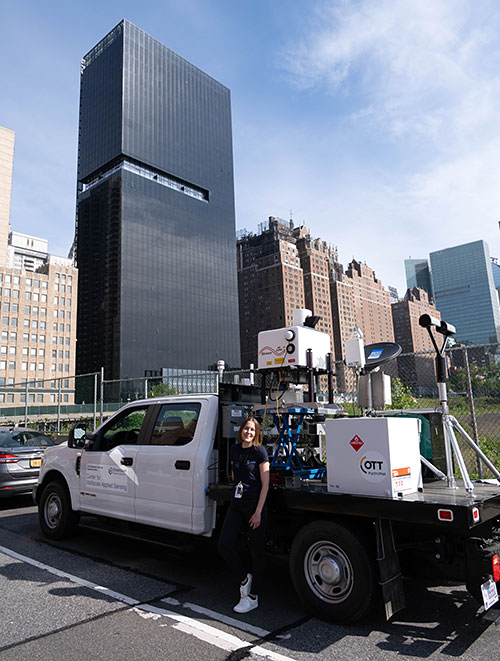 The mobile observatory's first round of data collection took place this June in Manhattan, where Brookhaven atmospheric scientist Katia Lamer and colleagues sought to understand how air flows around skyscrapers.

“Collecting high-resolution data in urban environments is a daunting task due to their highly heterogenous nature and high obstacle density,” Lamer said.

To capture data reflecting this heterogeneity, researchers could consider installing a network of scientific instruments across an entire city, but that approach is neither cost-efficient nor straightforward, requiring agreements with dozens of building owners. So, that’s where the CMAS truck comes in. Equipped with a novel suite of atmospheric measurement instruments, a navigation system, computers, routers, and generators for completely autonomous operations, Brookhaven’s new mobile observatory can move its sophisticated instrumentation to any areas of interest in a moment’s notice.

“This design allows us to study large-scale changes in temperature and rainfall between the city center and the suburbs and also smaller-scale changes between neighborhoods,” Lamer said. “Understanding these differences brings us one step closer towards achieving environmental equity for all city dwellers.”

The mobile observatory’s first round of data collection took place this June in Manhattan, where the CMAS research team sought to understand how air flows around skyscrapers. On two separate days, researchers parked the mobile observatory on each of the four sides of a single skyscraper, altering their position throughout the day as atmospheric conditions changed. 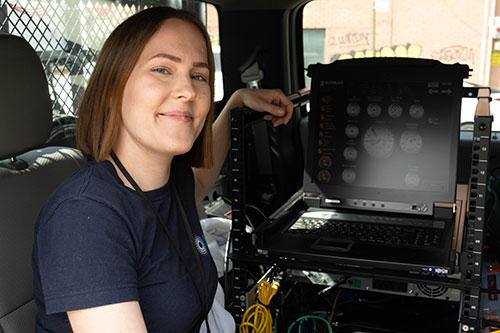 The mobile observatory is equipped with multiple remote sensors that exchange data in real time for improved accuracy.

“Our team wanted to observe whether the building is creating a systematic upward airflow and, if so, whether there is a compensating downward airflow at another point near the building,” Lamer said. “This type of air flow around buildings is something scientists do not fully understand, yet it has a huge impact on how pollutants and heat travel through the air and, as such, on the conditions experienced by pedestrians at street level.”

To monitor wind patterns above ground level, the research team used the mobile observatory’s scanning Doppler lidar, a laser system that can measure the movement of particles in the air. Real-time data from a fisheye camera guided the lidar.

“The use of multiple remote sensors exchanging data in real time through a high-speed internet signal is a new way of operating lidars for improved pointing accuracy,” Lamer said. “This significantly helps with collecting data between buildings, which otherwise would completely block our instrument signals.”

During the next round of observations, the mobile observatory collected data while traveling from Brookhaven Lab in central Long Island to lower Manhattan. The research team measured local winds and temperature as the truck was in motion. 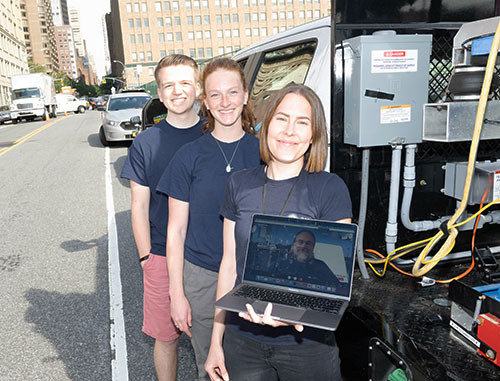 “We want to get a good idea of the city’s heterogeneity. We don’t expect the atmosphere to be the same in Long Island, Central Park, and Times Square, for example,” Lamer said. “Cities create a heat dome, somewhat like a bubble over the whole city, because they are so hot compared to surrounding areas. By collecting temperature observations across Long Island and Manhattan, we can try to observe the boundaries and characteristics of this heat dome.”

After the team completes its research in Manhattan, their goal is to deploy the truck to urban environments across the country.

“Each city has its own unique urban environment,” Lamer said. “New York City has a subway system, which has air moving in and out of underground tunnels, and the city is coastal, so it feels the effect of the sea breeze. Houston, in contrast, does not have an underground subway system and has smaller buildings. As such, it should have a different urban atmospheric structure.”

The team also hopes to expand the CMAS truck’s capabilities, such as monitoring building temperatures or energy from sunlight.

“We’re already seeing such a positive response from the community and other scientists, who are interested in putting their own instruments on our truck,” Lamer said. “It feels like this experiment will become a community platform and we look forward to growing into new research areas.”

This research was supported by DOE’s Office of Science and Brookhaven’s Laboratory Directed Research and Development funding.