This first-person account relates to a feature article about the ongoing assembly of sPHENIX, an upgraded 1000-ton particle detector being installed at the Relativistic Heavy Ion Collider (RHIC). RHIC is a DOE Office of Science user facility for nuclear physics research at the U.S. Department of Energy’s Brookhaven National Laboratory. 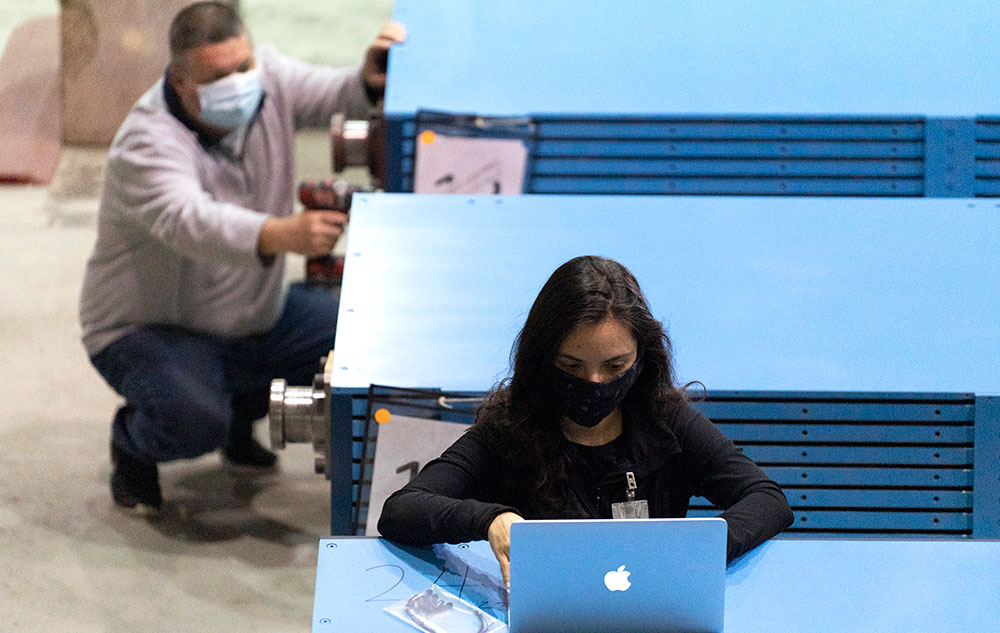 When I was first introduced to fundamental particles (i.e., quarks and gluons) in my undergraduate career at the University of California, Berkeley, I was so curious to learn how these particles behaved and what their roles were in our universe. As I learned later on, these particles "live" inside of nucleons— protons and neutrons—and we need a lot of energy to unconfine them so they can roam freely in space. This state of matter, where elementary particles are unconfined, is what we call quark-gluon plasma. Studying this state of matter is like studying the universe micro-seconds after it was born! So, you can think of it like traveling back in time and learning about our universe when it was very young! I was highly interested in learning about quark-gluon plasma and slowly got involved in doing research in heavy-ion physics. Years later, here I am getting my PhD in heavy-ion physics!

I work with the ATLAS experiment at the Large Hadron Collider, so I spend most of my time analyzing data. When my advisors, Professor Dennis Perepelitsa and Professor Jamie Nagle, asked my colleagues and I if we wanted to help in assembling and testing the outer hadronic calorimeters (OHCal) for the sPHENIX experiment at Brookhaven National Laboratory, I could not miss out on such an amazing opportunity! They told us to think about it before giving them our final answer. In my mind, I said yes and I knew my answer was not going to change.

In the beginning of January of this year, my colleague Sruthy Das and I got in my car and left from Boulder, CO, and drove all the way to Long Island, NY. Although we were in the middle of a pandemic, Sruthy and I did not let that stop us from helping out. We made sure to stay safe while being on the road by cleaning our hands well, standing 6 feet away from other people, wearing masks, etc.

I am really glad that I did not give up my dreams and I hope to inspire other young Latinas to go into the sciences.

Once we got to Brookhaven Lab, Jeff Ouellette, one of our senior graduate students, and Stefan Bathe, the scientist managing the outer hadronic calorimeter, walked us through how to assemble a sector and test it. It was sort of like following a cooking recipe. They provided all the ingredients—tiles, signal cables, optical fibers, etc.—and all we had to do was put them together by following a series of steps.

The challenge came when we had to test the sector and make sure we were getting the expected signals. There were times where we would not get a signal at all—and so we had to figure out what part was causing this issue. Sometimes it would take minutes, but there were plenty of times where it would take hours! But that's OK because it made us that much happier when we finally found the solution to our problem! We would celebrate by yelling, "Yes! We figured it out!" or go out and buy food from Taco Bell.

Growing up in Richmond, California, I was always surrounded by people that looked like me. As I started to move up higher in my education, I started to notice that there were not many Latinos in my classes. In fact, there were several times in my undergraduate career where I was the only Latina in my physics classes. Because I felt alone all the time, I thought that eventually I would drop out from achieving my dreams, earning my PhD in nuclear physics. If someone would have told me back then that I would be doing heavy-ion physics research in graduate school and helping out in assembling and testing the OHCal for the sPHENIX experiment, I would have probably laughed and said they were crazy! I am really glad that I did not give up my dreams and I hope to inspire other young Latinas to go into the sciences.