This first-person account relates to a feature article about the ongoing assembly of sPHENIX, an upgraded 1000-ton particle detector being installed at the Relativistic Heavy Ion Collider (RHIC). RHIC is a DOE Office of Science user facility for nuclear physics reasearch at the U.S. Department of Energy’s Brookhaven National Laboratory.

Fifth year PhD candidate and graduate research assistant at the University of Colorado Boulder (CU), describes working on sPHENIX assembly in his own words 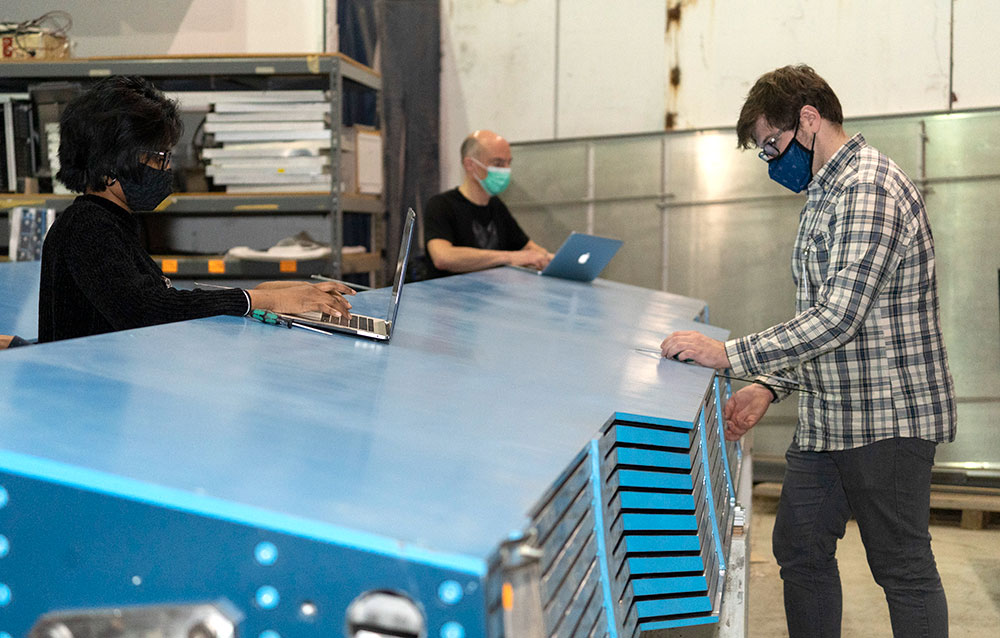 When I first was looking into working on sPHENIX onsite at Brookhaven last fall, I was planning to work on the “electromagnetic calorimeter” (or EMCal) system. It will consist of 64 individual sectors in the main body of the detector, each of which needs to be built and tested. The team at Brookhaven was already hard at work building the sectors, so I was set up to work on some initial testing of electronic components (before they were incorporated into EMCal sectors), and final electronics readout testing of the finished sectors.

In November, when I was soon due to arrive on site, [the team was working] to finish the "outer hadronic calorimeter" (OHCal), so I volunteered to work on this project as well. Fundamentally, the design of the OHCal is very similar to the EMCal, so it was easy to learn something while working on one detector and apply it to the other.

Then in January, our group decided to send Berenice Garcia, Daniel Lis, and Sruthy Jyothi Das to help with the OHCal assembly. And as more people came back from the winter holiday break, the assembly really started to accelerate, which was great to see. Every couple of days we would run out of some material because we were using it too quickly, which was really a “good” problem to have by then.

…helping build sPHENIX at Brookhaven was an extraordinary experience that we were fortunate to have.

By the time we were getting ready to go home (around the end of March), most of the sectors were finished being assembled and were ready to proceed to the burn-in stage, where we apply a sustained load to the electronics and hopefully break anything that might fail while there is time to fix it, and then finally calibration, where we use the detector to measure cosmic ray particles to understand how to convert detector signals into real, tangible energies.

Before traveling to BNL, my experience with sPHENIX was limited to calorimeter simulations to understand how well the final detector should perform. But assembly is really when all the work that has been put into design comes alive. This process can take years — even decades — so it is very special to be able to work hands-on with the detector at this point in its life. Also, while sPHENIX is a big collaboration and experiment, relative to others in the field (like those at the Large Hadron Collider), it is actually comparatively small. I like to think this enhances the human-interaction aspect. The groups you work in are smaller and there is more overlap in peoplepower, meaning you tend to work with the same folks on different things. Personally, I was able to work with some incredibly knowledgeable folks on these projects, which helped me pick up some invaluable technical skills that I likely would not have gained otherwise.

We frequently are asked about how the pandemic affected our experience. Of course there were some difficulties: getting approval to be on site, obtaining stable internet connections for Zoom calls, and helping other students without vehicles get around were all realities we had to deal with. But in the broader picture these were all minor bumps in the road—and helping build sPHENIX at Brookhaven was an extraordinary experience that we were fortunate to have.