This news release, originally issued by the University of Leeds, describes new insights into how viruses early in their evolutionary history developed a highly effective mechanism to carry their genetic code into other cells to infect them. A team of researchers used an artificial version of a key virus protein known as a capsid, and were able to construct a series of virus-like particles showing increasing protection of the genetic cargo enclosed by the capsid. Understanding this process may eventually help with the design of novel delivery mechanisms for gene therapies. Among other research methods, the team used the X-ray Footprinting of Biological Materials (XFP) beamline at the National Synchrotron Light Source II (NSLS-II) to study the structure and function of the artificial capsids. The XFP beamline is operated by the Case Western Reserve University Center for Synchrotron Biosciences in partnership with NSLS-II—a U.S. Department of Energy Office of Science User Facility located at Brookhaven National Laboratory. For more information on Brookhaven’s role in this research, please contact Cara Laasch, 631-344-8458, laasch@bnl.gov. 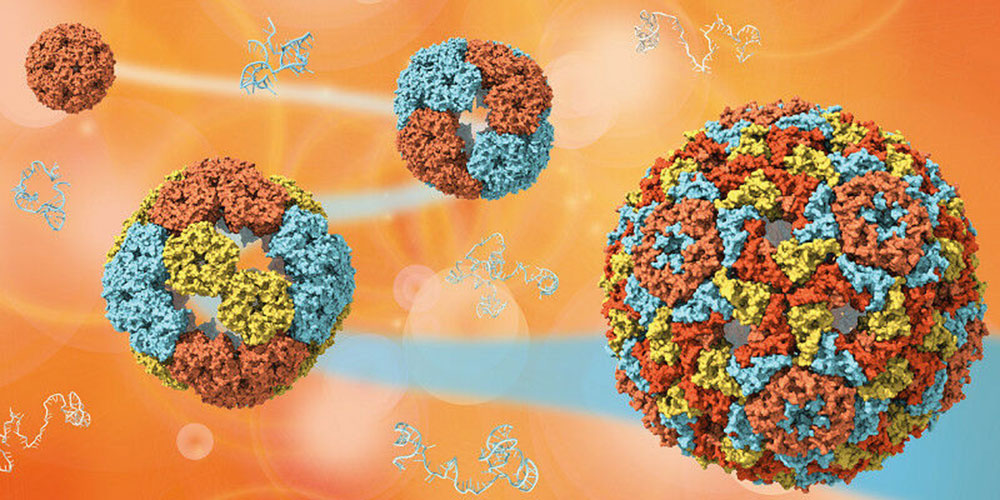 The scientists, involving a team from the universities of Leeds and York, believe understanding that key moment in the natural history of viruses may eventually help with the design of novel delivery mechanisms for gene therapies, where viruses are used to repair faulty genes.

Their findings - published in the journal Science - describes how viruses developed early in their evolutionary history a highly effective mechanism for getting their genetic code into other cells to infect them. The key to that process is the way genetic information is transported from the virus to the host cell – and that happens in a specialised protein container known as a capsid.

An artificial capsid was engineered from a bacterial enzyme by scientists at ETH University in Zurich, Switzerland - and that was used to mimic the behaviour of a virus capsid. Because the capsid rapidly recreates itself, the scientists were able to conduct an experiment in ‘artificial evolution’ - to see how the capsid adapted over time.

The capsid went through a series of structural modifications that made it more effective in the way it could transport and protect its genetic cargo.

A capsid contains structural sub-units. The sub-units contain the toolbox that the genetic code needs to replicate a virus’s RNA or DNA - or genetic blueprint. During the experiment with the artificial capsid, the scientists discovered that the capsid started off with 60 sub-units. As time went on, the number of subunits increased to 180 subunits and then to 240 subunits. These numbers are significant because natural viruses build their capsids from identical numbers of subunits.

Professor Peter Stockley, from the Astbury Centre for Structural Molecular Biology at the University of Leeds and a member of the research team, said “What’s remarkable is this artificial virus-like particle evolves to be more efficient in packaging its genetic code.

“This study shows how an artificial capsid has ‘evolved’ a system that is remarkably like that seen in natural viruses and therefore probably reveals an adaptation that occurred in the early evolution of viruses.”

Professor Stockley believes an understanding of the structural changes in a capsid development could eventually be exploited to help design and manufacture artificial capsids for use in gene therapy where they would be used to replace or repair faulty genes.

The team at the universities of Leeds and York used a technique called x-ray foot printing to investigate the genetic code in the capsids.

Professor Reidun Twarock, from the University of York’s Departments of Mathematics and Biology, and the York Cross-disciplinary Centre for Systems Analysis, said: “Using a novel interdisciplinary technique developed in our Wellcome Trust funded team in Leeds and York, we were able to demonstrate that this artificial system evolved the molecular hallmarks of a ‘virus assembly mechanism’, which enabled efficient packaging of its genetic cargo.”

Earlier this year, the scientists at Leeds and York published research that revealed how some viruses such as the viruses causing the common cold and polio package-up their genetic code in a way that makes them more infective.