This news release, originally issued by the Paul-Scherrer Institute (PSI), describes a new method developed by researchers from PSI and the U.S. Department of Energy’s Brookhaven National Laboratory to interpret complex x-rays experiments and that will aid studies on correlated materials such as superconductors or quantum computers. The development of the theory to better understand the experimental results of this new method were led by Brookhaven Lab researchers. For more information on Brookhaven’s role in this research, please contact Cara Laasch, 631-344-8458, laasch@bnl.gov.

Understanding the Physics in New Metals 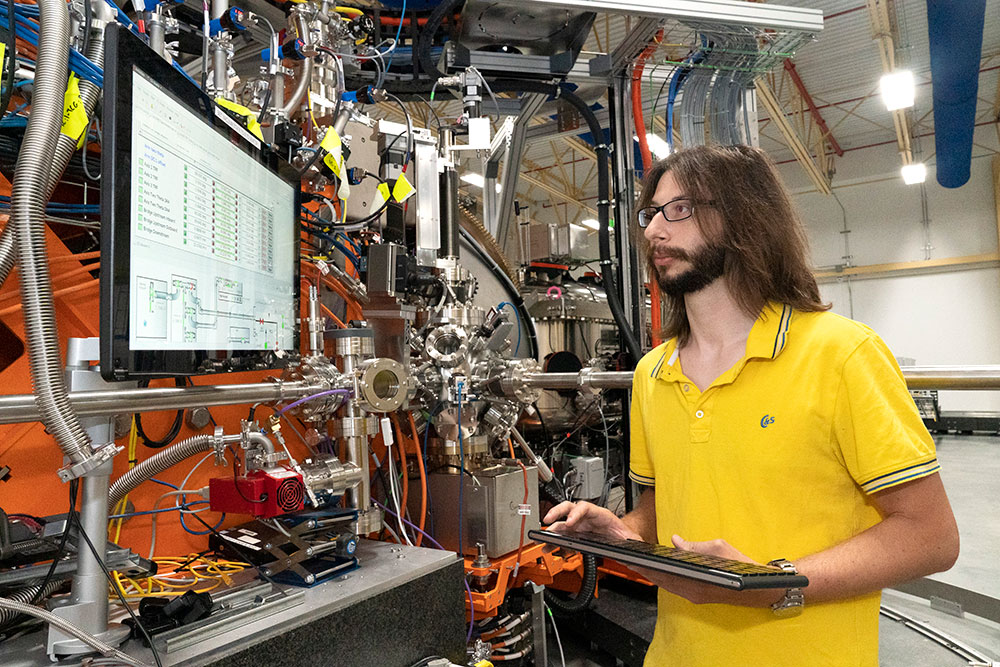 Brookhaven Lab Scientist Jonathan Pelliciari now works as a beamline scientist at the National Synchrotron Light Source II (NSLS-II), where he continues to use inelastic resonant x-ray scattering to study quantum materials such as correlated metals.

Researchers from the Paul Scherrer Institute PSI and the Brookhaven National Laboratory (BNL), working in an international team, have developed a new method for complex X-ray studies that will aid in better understanding so-called correlated metals. These materials could prove useful for practical applications in areas such as superconductivity, data processing, and quantum computers. Today the researchers present their work in the journal Physical Review X.

In substances such as silicon or aluminium, the mutual repulsion of electrons hardly affects the material properties. Not so with so-called correlated materials, in which the electrons interact strongly with one another. The movement of one electron in a correlated material leads to a complex and coordinated reaction of the other electrons. It is precisely such coupled processes that make these correlated materials so promising for practical applications, and at the same time so complicated to understand.

Strongly correlated materials are candidates for novel high-temperature superconductors, which can conduct electricity without loss and which are used in medicine, for example, in magnetic resonance imaging. They also could be used to build electronic components, or even quantum computers, with which data can be more efficiently processed and stored.

"Strongly correlated materials exhibit a wealth of fascinating phenomena," says Thorsten Schmitt, head of the Spectroscopy of Novel Materials Group at PSI: "However, it remains a major challenge to understand and exploit the complex behaviour that lies behind these phenomena." Schmitt and his research group tackle this task with the help of a method for which they use the intense and extremely precise X-ray radiation from the Swiss Light Source SLS at PSI. This modern technique, which has been further developed at PSI in recent years, is called resonant inelastic X-ray scattering, or RIXS for short. 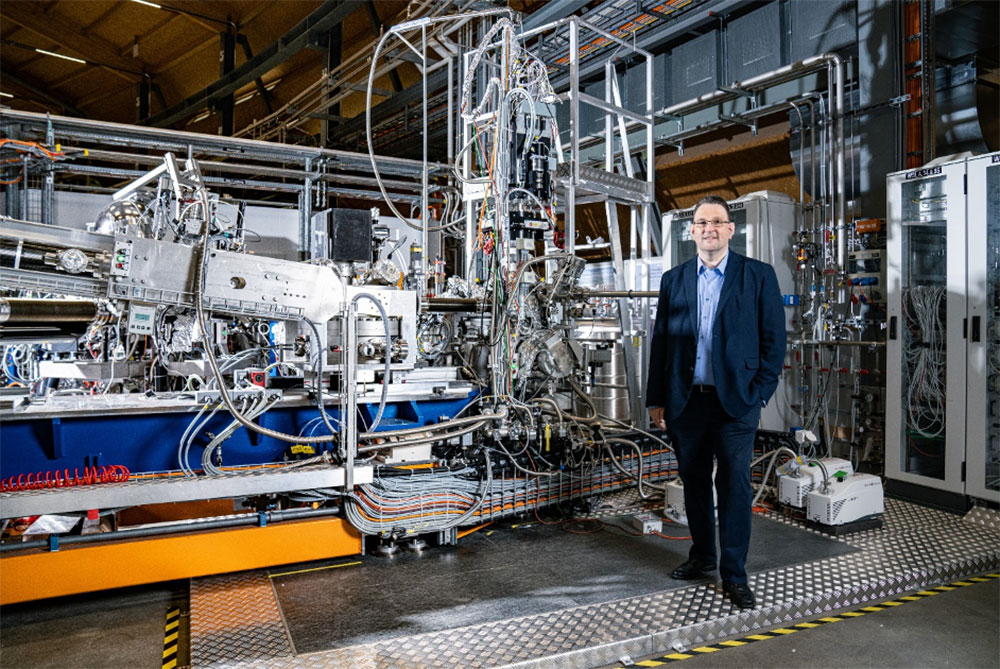 Thorsten Schmitt at the experiment station of the Swiss Light Source SLS, which provided the X-ray light used for the experiments. (Photo: Paul Scherrer Institute/Mahir Dzambegovic)

With RIXS, soft X-rays are scattered off a sample. The incident X-ray beam is tuned in such a way that it elevates electrons from a lower electron orbital to a higher orbital, which means that special resonances are excited. This throws the system out of balance. Various electrodynamic processes lead it back to the ground state. Some of the excess energy is emitted again as X-ray light. The spectrum of this inelastically scattered radiation provides information about the underlying processes and thus on the electronic structure of the material.

"In recent years, RIXS has developed into a powerful experimental tool for deciphering the complexity of correlated materials," Schmitt explains. When used to investigate correlated insulators in particular, it works very well. Up to now, however, the method has been unsuccessful in probing correlated metals. Its failure was due to the difficulty of interpreting the extremely complicated spectra caused by many different electrodynamic processes during the scattering. "In this connection collaboration with theorists is essential," explains Schmitt, "because they can simulate the processes observed in the experiment." 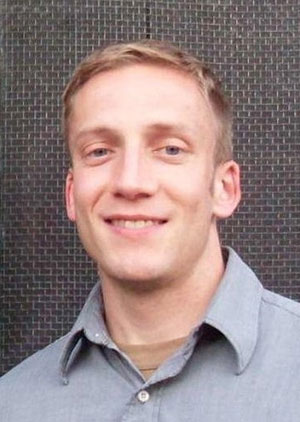 Keith Gilmore developed the theoretical description of the processes observed in the experiment and constructed the computational workflow to calculate the spectra. (Photo: Keith Gilmore)

This is a specialty of theoretical physicist Keith Gilmore, formerly of the Brookhaven National Laboratory (BNL) in the USA and now at the Humboldt University in Berlin. "Calculating the RIXS results for correlated metals is difficult because you have to handle several electron orbitals, large bandwidths, and a large number of electronic interactions at the same time," says Gilmore. Correlated insulators are easier to handle because fewer orbitals are involved; this allows model calculations that explicitly include all electrons. To be precise, Gilmore explains: "In our new method of describing the RIXS processes, we are now combining the contributions that come from the excitation of one electron with the coordinated reaction of all other electrons."

To test the calculation, the PSI researchers experimented with a substance that BNL scientist Jonathan Pelliciari had investigated in detail as part of his doctoral thesis at PSI: barium-iron-arsenide. If you add a specific amount of potassium atoms to the material, it becomes superconducting. It belongs to a class of unconventional high-temperature iron-based superconductors that are expected to provide a better understanding of the phenomenon. "Until now, the interpretation of RIXS measurements on such complex materials has been guided mainly by intuition. Now these RIXS calculations give us experimenters a framework that enables a more practical interpretation of the results. Our RIXS measurements at PSI on barium-iron-arsenide are in excellent agreement with the calculated profiles," Pelliciari says.

Combination of experiment and theory

In their experiments, the researchers investigated the physics around the iron atom. "One advantage of RIXS is that you can concentrate on a specific component and examine it in detail for materials that consist of several elements," Schmitt says. The well-tuned X-ray beam causes an inner electron in the iron atom to be elevated from the ground state in the core level to the higher energy valence band, which is only partially occupied. This initial excitation of the core electron can cause further secondary excitations and trigger many complicated decay processes that ultimately manifest themselves in spectral satellite structures. (See graphic.)

Since the contributions of the many reactions are sometimes small and close to one another, it is difficult to find out which processes actually took place in the experiment. Here the combination of experiment and theory helps. "If you have no theoretical support for difficult experiments, you cannot understand the processes, that is, the physics, in detail," Schmitt says. The same also applies to theory: "You often don't know which theories are realistic until you can compare them with an experiment. Progress in understanding comes when experiment and theory are brought together. This descriptive method thus has the potential to become a reference for the interpretation of spectroscopic experiments on correlated metals."

The international team has published its work in the journal Physical Review X.