The following news release, issued by the University of Pennsylvania (UPenn), describes a paper published in Proceedings of the National Academy of Sciences of the United States of America (PNAS). The study details the discovery of a new liquid phase in ultra-thin glass. The research team, led by UPenn scientists, studied this new phase at their home institution and then verified their findings through measurements at the National Synchrotron Light Source II (NSLS-II)—a U.S. Department of Energy Office of Science User Facility at Brookhaven National Laboratory. The team worked together with the scientists from the Soft Matter Interfaces (SMI) beamline to investigate the structure of the new liquid phase. General access to the SMI beamline and all other beamlines at NSLS-II is granted through a free-of-charge, peer-reviewed proposal system. For more questions regarding Brookhaven’s role in this research, please reach out to: Cara Laasch, 631-344-8458, laasch@bnl.gov.

Through the Thin-film Glass, Researchers Spot a New Liquid Phase

A new study on thin films of glass shows how they can be fabricated to be denser and more stable, providing a framework for new applications and devices through better design 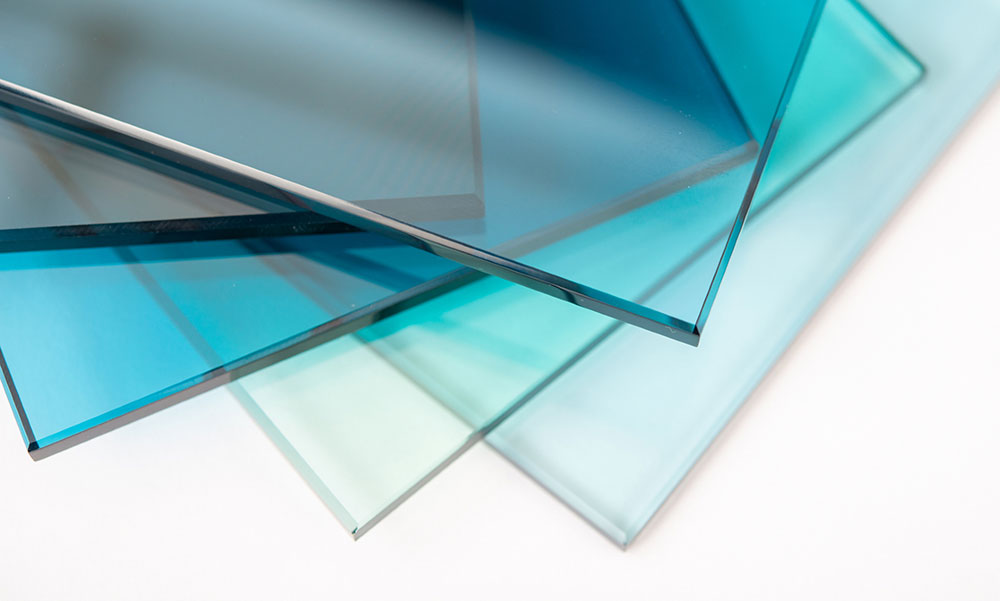 Research from the lab of Zahra Fakhraai describes a new liquid phase in thin films of a glass-forming molecule. These results demonstrate how these glasses and other similar materials can be fabricated to be denser and more stable, providing a framework for developing new applications and devices through better design.

Research published in the Proceedings of the National Academy of Sciences describes a new type of liquid in thin films, which forms a high-density glass. Results generated in this study, conducted by researchers in Penn’s Department of Chemistry, demonstrate how these glasses and other similar materials can be fabricated to be denser and more stable, providing a framework for developing new applications and devices through better design.

Glass is typically created through solidification, or falling out of equilibrium, of a liquid when  it is cooled to a temperature where its motion arrests. The structure of a glass closely resembles the liquid phase, but its properties are similar to solids, akin to a crystal.

Glasses that are made into ultrathin, nanometer-scale films are widely used in applications such as OLED displays and optical fibers. But when these types of glasses are made into thin films, even at cold temperatures they behave more like a liquid, and the resulting material can be prone to droplet formation or crystallization, which limits the size of the smallest features that are possible. 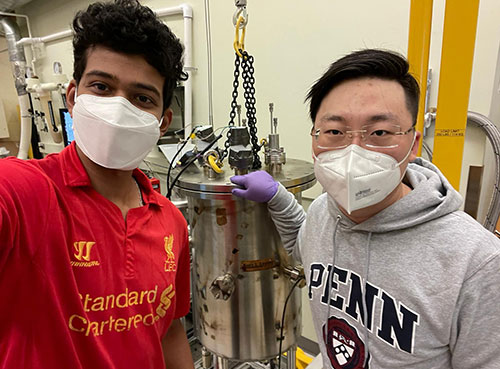 Shivajee Govind (left), a Ph.D. student in the lab of Zahra Fakhraai, and Yi Jin, study lead author and recent Ph.D. graduate, standing by the ultra-high vacuum chamber that the researchers use to deposit glass thin films. (Image courtesy of Zahra Fakhraai)

To make better glasses, researchers have used vapor deposition instead of cooling a liquid to produce a glass. In vapor deposition, a material is changed from a gas into a solid directly. While this method has allowed researchers to create denser types of bulk glasses, it was initially thought that thin glass films made using this method would still have the same liquid-like properties that would lead to degradation and instability.

But Yi Jin, a recent Ph.D. graduate who worked in the lab of Zahra Fakhraai, ran experiments and found that this was not actually the case. “Yi kept discovering different properties, none of the data made sense, and so we dug deeper until we had enough data to put a picture together,” says Fakhraai.

Jin spent several years conducting detailed experiments, from changing the glass substrate, properties, and deposition rates to ensuring that all of their equipment was thoroughly cleaned to rule out contamination or experimental error.

After running all of the control experiments needed, the researchers were surprised to find that when using vapor deposition, they could access a different type of liquid, with a phase transition to the typical bulk liquid upon heating. A phase transition is when a material changes from from one state (gas, liquid, or solid) into another. ”The two liquids have distinct structures, akin to graphene and diamond which are both solids made of carbon but exist in very different solid forms.”

“There are a lot of interesting properties that came out of nowhere, and nobody had thought that in thin films you would be able to see these phases,” says Fakhraai. “It’s a new type of material.”

Using vapor deposition, the researchers can create very dense thin-film glasses, corresponding to the packing of this new liquid phase, with a density much higher than was predicted to be possible without applying immense amounts of pressure. Thin films of these glasses can have density values even higher than crystal.

Another hypothesis based on the data they’ve collected so far is that the ability to access this unique phase is due to the glass’ geometry, which means that this work could have implications for other types of materials as well. “We’re developing materials that are trying to go down in terms of scale,” says Jin about his current work in the materials science industry. “From what we see in glasses, there could also be interesting phenomena that emerge from other materials, like metallic materials that are commonly used in semiconductors, for example.”

Researchers in Fakhraai’s lab are already working on follow-up experiments to learn more about the crucial parameters that lead to this unique phase transition. This includes studying films during the deposition process and “zooming in” on the phase transition region to learn more about this newly-discovered phenomenon. This work is also crucial for gaining a better understanding of glasses as a whole, says Fakhraai, where there remains a disconnection between theories that could provide a predictive platform for developing new materials in applications and new technologies.

“To package the Moderna or Pfizer vaccines, you need a glass that could go really low in temperature and not shatter, and the fact that that technology exists is a shoutout to how well we can engineer bulk glass mechanics,” she says. “Our hope is that this fundamental understanding motivates more applications and a better ability to design thin film glasses with similarly improved properties. If the structure-property relationships are understood in thin films, we can do better by design.”

Zahra Fakhraai is an associate professor in the Department of Chemistry in the School of Arts & Sciences at the University of Pennsylvania.

This research was supported by National Science Foundation grants DMREF-1628407 and DMR-1720530 and Department of Energy contract DE-SC0012704.