Scotland-based nuclear physics research fellow works toward Electron-Ion Collider in hopes of journey to the smallest of places: the world of quarks and gluons 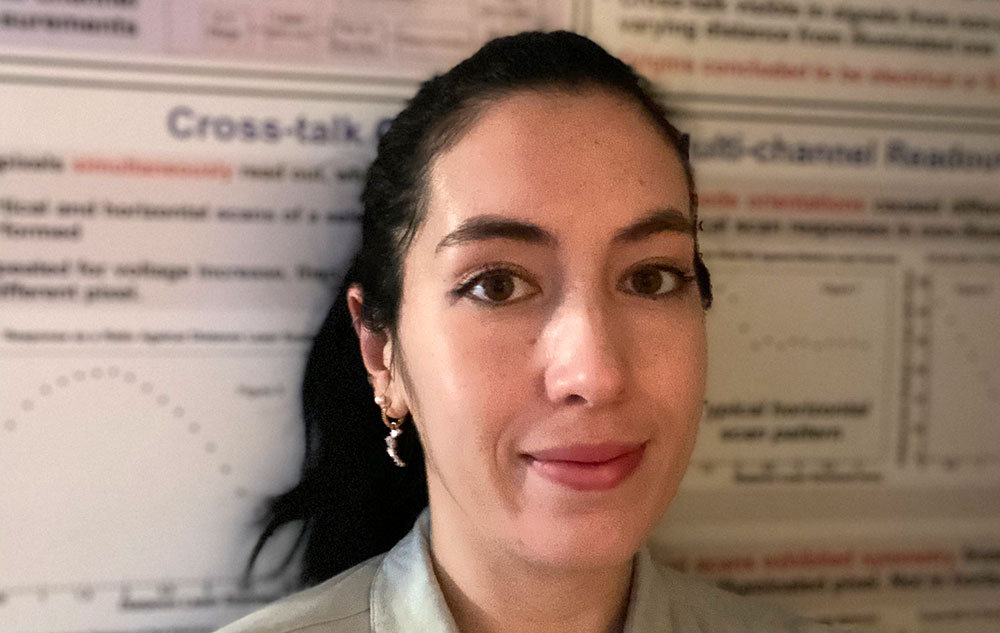 What is your role in the Electron Ion Collider (EIC)?

I am a co-convenor for one of the working groups of the physics benchmark team for the upcoming EIC Collider Experiment (ECCE) detector proposal. In our group, we are studying several interesting exclusive reactions, which we plan to measure at the EIC. These measurements will help to shed light on some of the EIC’s most pressing topics, for example: multi-dimensional imaging of the quarks and gluons inside nucleons, nuclei, and mesons.

Exclusive reactions require all final state particles to be detected and fully reconstructed. As such, we are studying the particular strengths of the ECCE detector design with regards to realizing these measurements.

My interests and activities in the EIC project were first sparked through involvement with the EIC meson structure working group. In my current research, which is ongoing at Jefferson Lab, I am involved in upcoming experiments aiming to extract information on the structure of particles called light mesons, such as the pion and kaon.

The EIC will provide our community with an excellent opportunity to drastically expand our existing sparse data describing light meson structure and vastly improve our knowledge of the dynamic picture of quarks and gluons inside these mesons.

The EIC will unlock a totally new area of discovery and technology in nuclear physics. It will be a completely novel and unique facility, in terms of the physics reach available and the type of accelerator it is. This will allow us to explore a completely new regime in our field. The opportunities to learn more about the roles of gluons within nucleons, and nucleons bound within nuclei, will be crucial to completing our knowledge of how the quarks and gluons are arranged within the nucleon, and how this impacts the observable properties of the nucleon and nuclei.

The advancements in accelerator and detector technologies necessary to achieve these challenging measurements will likely also have many applications in other fields of science.

I’m really very keen to continue my research and learn more about meson structure at the EIC. These mesons play very important roles in quantum chromodynamics and nuclear physics. The EIC provides us with a truly exciting opportunity to collect more meson structure data, which will allow us to explore topics such as how the mass and structure of pions and kaons emerge and what implications this has for the mass of other hadrons—as well as for nucleon and nuclear structure.

On a more personal level, I am also looking forward to expanding my horizons, in general, and learning more about particle collider experiments. Before the EIC, I had only been involved in fixed-target experiments. The EIC is already bringing together many physicists and engineers from several different areas of accelerator, particle and nuclear physics, and I expect there will be lots of chances to learn about new topics beyond my immediate research field. I am also looking forward to exploring future research collaborations or projects.

I expect, within the scope of my research, that the biggest challenges will be the availability of computing resources, in terms of CPUs and data storage available. Many of the reactions we are planning to look at are rare processes, which means that we will need to collect very large data sets, and these data sets will include vast amounts of information from the detectors.

The data will also include events from competing background processes, which we must remove to extract our reactions of interest. As well as analyzing data collected at the EIC, it is necessary to simulate our measurements and the background processes. This is the stage I am at in my current EIC activities. This stage requires batch processing to perform the simulations and analysis of the outputs congruently. The processes require many CPU hours each and, due to the numerous particles created in the reactions and the recording of information from their passage through many detector systems, the data files are very large in size.

A similar workflow process will be required when analyzing data from the experiments. Since there are countless interesting studies and science opportunities at the EIC, there will be numerous scientists planning to use the computing facilities available in a similar way, at the same time.

The particles and interactions that we study in nuclear physics allow us to better understand the fundamental building blocks of the visible matter surrounding us—and, subsequently, the universe in which we live. I find this level of pure discovery really inspiring. To me, it’s fascinating that the physics of our field can be used to describe systems spanning from the simple hydrogen atom all the way up to astronomical scales. I enjoy discussing this aspect of nuclear physics—and the relevance of nuclear physics to everyday applications in society—with people outside of physics and observing how it sparks their curiosity, too.

Within my own research, beyond the wider scientific context, I am really interested to learn about and work on technology advancements. The detectors and apparatus we are developing for the novel experiments that I am involved with are pushing beyond existing limits, and that is very exciting. I love to see how advanced instrumentation can enable us to measure the nucleon on the deepest level possible.

My monitors. I keep my desk pretty clutter-free and prefer a “mission control” approach, with more than one monitor and with each monitor being as big as possible, so I can immerse myself in work. The same is true about my virtual desktop–in fact there is nothing on it, except the background picture, which is a holiday snap.

A typical workday involves a lot of computational work, mostly simulations of upcoming experiments or detectors using Geant4, as well as the development of software for analyzing data from detectors. I also have several meetings, most of which are virtual (even under normal circumstances), since I am based at the University of Glasgow in the United Kingdom.

Typically, I also spend some time during the week in my laboratory at the university, either testing electronics or working on detector characterisations. I enjoy the variety in dividing my time between working at a desk and doing practical work in a laboratory. I have Ph.D. student supervisory duties, so a typical day may also involve meeting and working with the Ph.D. students. During term time, I also run an undergraduate lab on particle detection and help out with undergraduate physics labs.

All of these activities are fuelled by scattered, but important, coffee breaks.

In addition to EIC topics, my research is mostly focused on working with colleagues to prepare upcoming Jefferson Lab experiments that will use the new Super BigBite Spectrometer apparatus in experimental Hall A. I am really looking forward to the beginning of operations at Jefferson Lab again, to see these exciting experiments become reality and contribute to them.

The experiments I am involved with at Jefferson Lab are about looking at the inner structure of the nucleon and light mesons by using novel techniques in previously unexplored kinematic regimes. I also greatly enjoy working on particle detector developments, and I’m currently involved in some fast photon detector studies, for example.

Outside of science, or work, you can find me mostly checking the weather forecast to opportunistically explore the Scottish mountains in my free time (either hiking or snowboarding). If the weather doesn’t allow for these adventures, I enjoy going to the cinema or going to see live music.

* This profile features a member of the EIC Comprehensive Chromodynamics Experiment (ECCE) consortium, which is currently developing a general detector concept that meets the design requirements and performance goals for an EIC detector as laid out by the EIC Yellow-Report process. Other profiles in this series feature members of the A Totally Hermetic Electron-Nucleus Apparatus (ATHENA) collaboration, which is developing an EIC detector concept inspired by the Yellow Report and based on a new central detector magnet up to 3 Tesla.