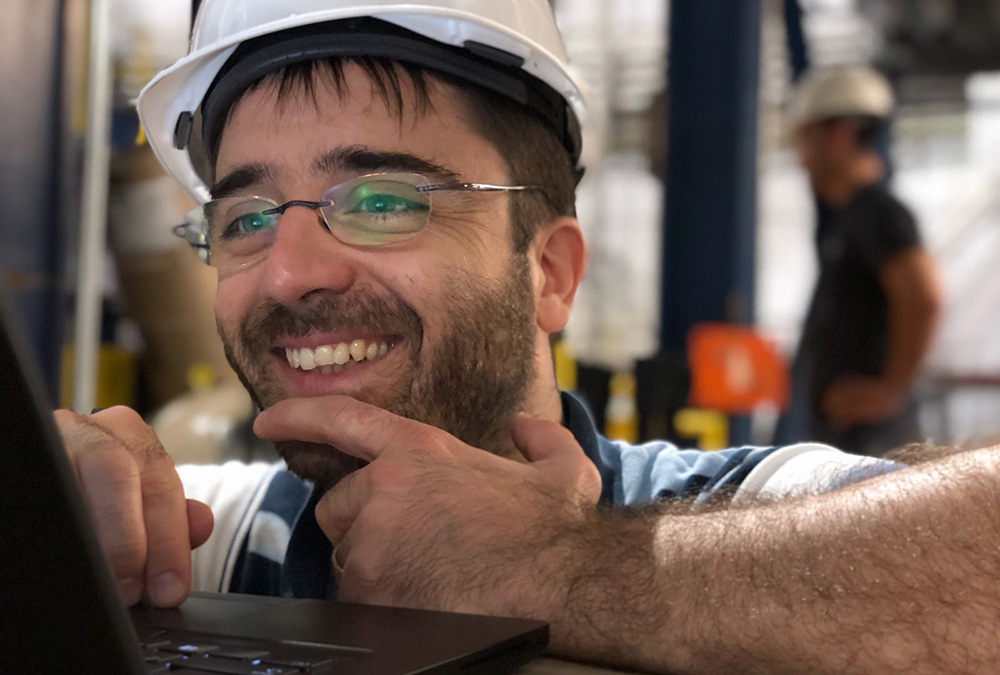 When the EIC white paper “Electron-Ion Collider: The Next QCD Frontier: Understanding the Glue that Binds Us All” was published in 2016, I was a postdoctoral researcher in heavy-ion physics. I became very interested in the physics case of the EIC project.

In 2017, I joined CEA-Saclay as a staff scientist, and I finally got the opportunity to work on the EIC. The amount of time I am dedicating to the EIC is becoming larger and larger. In 2019, I was part of the local organizing committee of the EICUG meeting that was held in Paris. In 2020, within the Yellow Report initiative, I have been involved in studies both on physics observables and on detector simulations. I am also involved in research and development studies at CEA-Saclay on micro-pattern gaseous detectors for particle tracking that aim to deliver competitive technology solutions for the EIC detector.

The EIC will definitely provide high-precision data over a broad phase space that will allow us to refine our understanding of key properties of nucleons and nuclei. The interconnection of EIC physics and the research at other facilities, such as the Large Hadron Collider at CERN, will also underline the importance of the EIC project. In addition, the EIC environment is very demanding in terms of detector and computing performance, and it is already driving advanced R&D programs that will result in innovative technological solutions.

There are several questions that I wish to investigate with the EIC. In particular, I hope that the EIC will allow us to learn more about the characteristics of gluon distributions inside hadrons. On a personal growth level, I am looking forward to learning, using, and maximizing the most modern data-mining technologies that will be needed to make the most out of the EIC data.

In order to study in detail the characteristics of gluons in nucleons and nuclei, one needs to collect massive quantities of data regarding rather rare events. The EIC will provide very large luminosities, allowing us to reach the needed statistical precision in most of the phase space. The EIC’s ability to collide electrons with a variety of different nuclei as heavy as uranium will be crucial to studying the effect of the nuclear environment on the distribution of quarks and gluons inside nuclei.

With the large amount of data that the EIC will provide, we will be able to perform precision multidimensional measurements. Traditional analysis techniques may not be sufficient to enable us to extract the interesting features with the needed precision. I think that physicists will have to increasingly embrace the machine learning and artificial intelligence technologies to fully exploit the EIC data.

However, these technologies, although very powerful, should not be used blindly, as they might obfuscate the data analysis procedure and make the validation of the results harder. I think that one of the challenges we will face will be to stay up to date with the latest techniques, and then to use the “right” tools for each problem.

Being a particle physicist, I feel privileged: I have the opportunity to live out what was my high school dream. The most fascinating thing in my work is the interaction with colleagues at my local institute and from around the world; after every formal or informal discussion, I find that I have learned something new.

A “drinking bird.” It was a gift my former colleagues gave to me at the end of my postdoc with them. This toy heat engine reminds me that there are very intriguing physics phenomena even behind simple objects. I stare at its periodic movement for minutes and minutes while I am thinking about how to solve some issue.

In the last year and a half, the COVID-19 pandemic radically changed the typical workday. Today, after taking my daughter to the nursery, I sit at my kitchen table with my laptop open and, likely, listen to the discourses of colleagues attending a videoconference in my earphones. A couple of days per week, I go to the lab for rare in-person meetings and for some R&D-related work. One thing that I miss now are the discussions during the coffee breaks with my colleagues at the lab.

Since her birth, my little daughter has captured basically all of my attention. In my (rare) spare time, I like to read novels, mainly sci-fi, or do some gardening.

* This profile features a member of the A Totally Hermetic Electron-Nucleus Apparatus (ATHENA) collaboration, which is developing an EIC detector concept inspired by the Yellow Report and based on a new central detector magnet up to 3 Tesla. Other profiles in this series feature members of the EIC Comprehensive Chromodynamics Experiment (ECCE) consortium, which is currently developing a general detector concept that meets the design requirements and performance goals for an EIC detector as laid out by the EIC Yellow-Report process.