This year, the annual meeting of Federally Employed Women (FEW), an organization that works to advance the careers of women in government, got a little hairy. 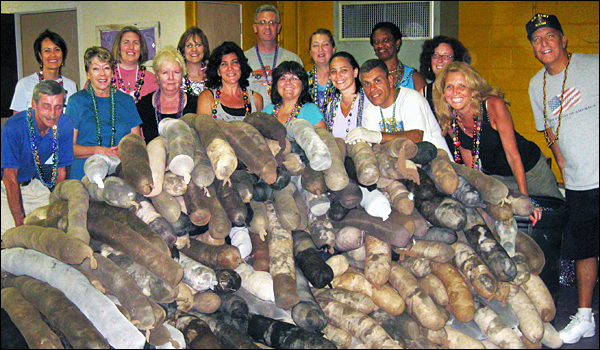 FEW conference attendees from BNL with the pile of 335 booms they made to help clean up the oil in the Gulf.

Participants gathered in New Orleans July 12 - 16 for FEW’s 40th National Training Program. This annual meeting, attended by selected BNL employees, provides women with the benefits of a variety of events and training courses, as well as the opportunity to network with other female federal employees.

But this year, the BNL women at FEW had another opportunity — volunteering to help the environment.

MaryAnn Maggio of BNL’s Business Systems Division had been watching news of BP’s oil spill. “You sit there and watch the television, and it’s heartbreaking,” said Maggio.

Maggio coordinated transportation for the BNL women to a warehouse that normally recycles Mardi Gras beads. In the wake of the oil spill crisis, the volunteer organization Matter of Trust began using this space to make booms.

Booms are devices used to soak up oil. Although BP has been using synthetic booms, Matter of Trust makes non-synthetic ones by filling stockings with materials, like hair, that naturally collect oil.

At this New Orleans warehouse, Matter of Trust relies on volunteers to stuff hair and fur — from humans, dogs, llamas, and even alpacas — into pantyhose, making natural booms. The booms can then be deployed in the Gulf, where they sop up the excess oil from the spill.

Over the course of two hours, these Brookhaven women, along with several husbands and a friend, made 335 booms, more than any other volunteer group had accomplished in a single session.

Those who found touching the hair distasteful helped carry other materials like completed booms.

“Everybody did what they could do,” explained Maggio.

Although another volunteer group exceeded their record the next day, this hardly disappointed the BNL team. After all, BNL’s performance had served as an inspiration, motivating the other group to do more for the environment.

The BNLers felt proud to have represented the Laboratory, women, and New Yorkers in their effort.

“It’s about women being passionate and making a difference,” said Maggio. “I think we made a good showing.”