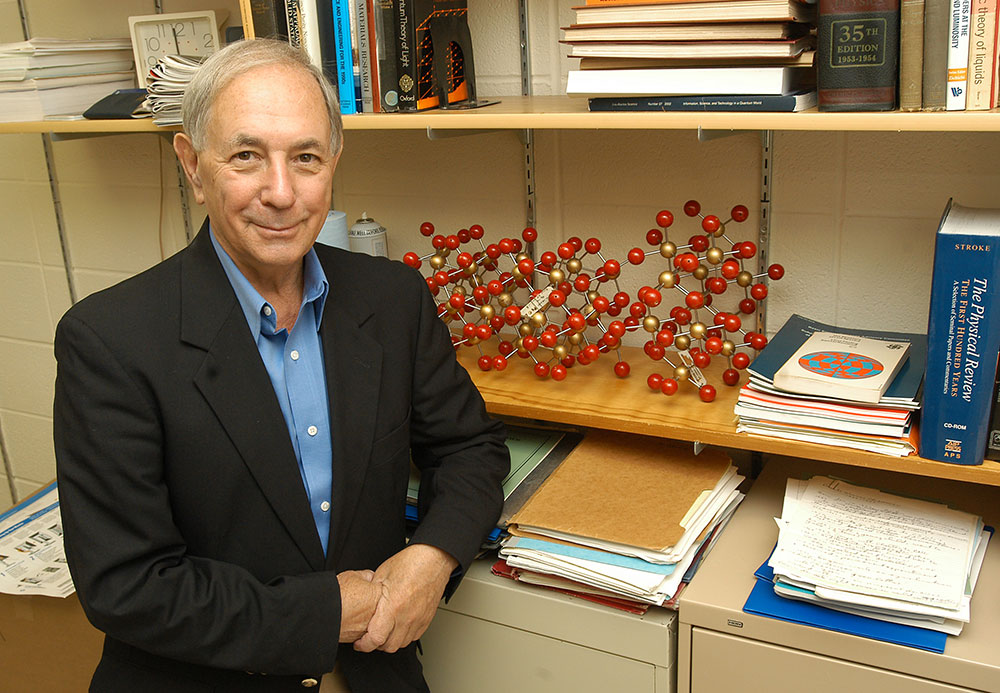 Martin Blume in 2007, when he was named Senior Physicist Emeritus.

Martin “Marty” Blume, a theoretical solid-state physicist who propelled the development of the National Synchrotron Light Source (NSLS) and served 12 years as deputy director at the at the U.S. Department of Energy’s (DOE) Brookhaven National Laboratory, died on Wednesday, October 6, 2021. He was 89.

As a scientist, Blume’s interests ranged from fundamental contributions to the theory of phase transitions to understanding the properties of solids to elucidating our understanding of neutron and x-ray scattering cross-sections—and much more.

As a science leader, Blume had a long-term vision which was built on his understanding of how national laboratories and the Department of Energy actually work. He led the effort to attract, build, and operate NSLS–the first dedicated synchrotron in the world and the precursor to the National Synchrotron Light Source II now in operation at Brookhaven. He also helped found Brookhaven’s current strengths in condensed matter physics and materials science, in both the theoretical and experimental domains, Gibbs said.

From 1975 to 1977, Blume led the design committee for NSLS, a second-generation synchrotron that yielded advances in biology, physics, chemistry, geophysics, medicine, and materials science from 1982 to 2014. After ground broke for the facility in 1978, he was named head of the NSLS Scientific Program.

He was awarded the DOE’s prestigious Ernest Orlando Lawrence Award in 1981 for his scientific leadership in solid-state physics, especially in the research program then emerging at NSLS.

Blume was especially proud of the Chasman-Green lattice–a novel design that stressed brightness in NSLS and other light sources–and the concept of Participating Research Teams, or PRT’s, which he pioneered and became the model for organizing and operating beamlines at light sources internationally, colleagues recalled.

Seeing the Light: In 2011, Blume spoke at the ceremony in which the APS honored Brookhaven National Laboratory as a historic site in the advancement of the field of physics. Blume tells the story of Brookhaven scientists Renate Chasman and Kenneth Green who developed the Chasman-Green Lattice, a critical component for the National Synchrotron Light Source, other light sources around the world, and the future NSLS-II.

“Marty Blume was a major player in enhancing the scientific program at Brookhaven Lab for many years,” said former Brookhaven Lab director Nicholas Samios. “His contributions were in personal publications, which were numerous, in his administrative abilities, and his vision for science.”

Blume first joined Brookhaven Lab’s Physics Department in 1962 as an associate physicist. In 1968, he was appointed group leader of solid-sate theory, then head of solid-state physics and deputy department chair in 1975. He taught physics at Stony Brook University from 1972 to 1980.

He was named Deputy Director in 1984, a post he held for 12 years. He stepped down in 1996 order to return to the Physics Department where he focused on x-ray scattering theory and collaborating with theorists and experimenters who worked with x-rays at the NSLS.

“What I appreciated about Marty, in addition to his starting the jogging craze in the 70s within the Solid State group of the Physics Department, was his uncanny ability to simplify and explain his theoretical calculations to us experimentalists,” said Brookhaven senior physicist and emeritus Steve Shapiro. “Marty willingly and enjoyably wanted to talk about the experiments and get first crack at the results.  It was this close interaction with theory and experiment led by Marty that made Brookhaven an exceptional place to do science.”

In his time at Brookhaven, Blume was a mentor to younger scientists. He was also known around the Lab for a wonderful sense of humor, social grace, and a steadfast commitment to safety, Gibbs said.

“His impact and personal influence were one of the strengths of Brookhaven for all the years he served there,” Gibbs said.

In January 1997, Blume kicked off a decade as editor-in-chief of the American Physical Society (APS), one of the country’s leading science organization that produces Physical Review journals, Physical Review Letters, and Reviews of Modern Physics.  He received the Council of Science Editors highest award, the Meritorious Achievement Award, in 2005 for his contributions to scientific communication.

Blume shared the 2003 Advanced Photon Source Arthur H. Compton Award with Gibbs and Denis McWhan, along with Kazumichi Namikawa of Gakugei University in Japan. The award honored the group of scientists for “pioneering theoretical and experimental work in resonant magnetic x-ray scattering, which has led to important applications in condensed matter physics.”