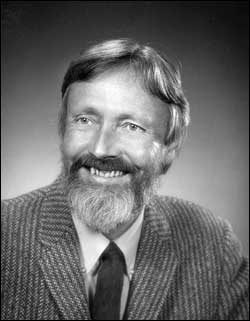 Two other BNLers were also honored as Neutron Scattering Society of America (NSSA) Fellows since the organization’s fellowship program began in 2007. Laurence Passell, a BNL guest researcher in the Condensed Matter Physics and Materials Science Department (CMPMSD), became a fellow in 2008, and John Tranquada, a senior physicist in CMPMSD, was elected a fellow in 2007.

Axe was given the distinction of fellow for “seminal studies of commensurate and incommensurate structural phase transitions, and service to the U.S. and international neutron community.”

Axe said, “I am proud of helping to establish the NSSA, which allowed non-government scientists to have access to neutron scattering facilities, giving birth to a vigorous user community. When I began my career in neutron scattering, I knew most of the players on a first-name basis, but now the NSSA is full of members that I don’t know, who are making remarkable advances in the field.”

Axe used the Lab’s High Flux Beam Reactor (HFBR) to study how crystalline solids undergo structural changes with temperature fluctuations. All solid materials are in continuous vibration at the atomic level, and sometimes this vibration becomes “stuck” in a certain direction and embedded permanently in a material’s structure. Occasionally this new structure has a repeating unit that is a multiple of the original structure and it is called “commensurate”; when it does not, it is called “incommensurate.” Using neutrons as a probe, Axe performed basic studies of both kinds of structures, but he was most interested in incommensurate materials, which often have unusual elastic, electrical and magnetic properties.

Axe received a B.S. in chemistry from the University of Denver in 1956 and a Ph.D. in chemistry from the University of California at Berkeley in 1960. After working for IBM, Axe joined BNL in 1969, mainly to study structural phase transitions at the HFBR. He was named HFBR Scientific Program Head in 1988, and in 1990, he was appointed Associate Director for Basic Energy Sciences, a position he held until 1995, when he again pursued research as a senior physicist. He retired in 1998, and since that time he has held a guest appointment at BNL.

A fellow of the American Physical Society since 1969, Axe has won numerous awards for his research. In 1973, he was the co-recipient with the late BNL physicist Gen Shirane of the Bertram Eugene Warren Diffraction Physics Award of the American Crystallographic Association; in 1976-77, he was awarded a John Guggenheim Fellowship; and in 1989, he won the DOE award for Sustained Outstanding Research in Solid State Physics.

Passell’s 2008 fellowship citation stated, “For his sustained and pioneering work in the application of neutron scattering to studies of surfaces and crystal field excitations as well as his contributions to neutron instrumentation in the development of polarizing multilayers and novel methods of preparing monochromators.”

Passell was the first to use neutrons as atomic-scale probes of surface films. At the HFBR, he and coworkers showed that neutron scattering from films adsorbed on high-surface-area powders, such as graphite and magnesium oxide, could be separated from scattering from their substrates. By analyzing the film-related part of the scattering, they were able to determine a number of single-and multiple-layer film structures, establish their relationship to the underlying surface structures, and, in a few cases, explore film dynamics as well.

Passell and his coworkers also pioneered the use of neutrons to investigate the configuration of internal electric fields in a variety of rare earth materials. Today, these materials are found in such applications as fiber optic communications and medical diagnostic systems.

In addition to his work in basic science, Passell also had a strong interest in neutron instrumentation, inspiring the development of the composite neutron monochromators currently employed in high-resolution neutron studies of crystal structures and of improved methods of producing polarized neutron beams – beams of neutrons with their spins all pointing in the same direction. Such beams are used to explore the fundamental properties of the neutron and identify the purely magnetic part of neutron scattering from magnetic materials. At the HFBR, Passell and coworkers were the first to develop neutron-reflecting multilayer films composed of alternating magnetic and non-magnetic layers and to show that they are efficient low-energy neutron polarizers and polarization analyzers.

Earlier in his career at the Brookhaven Graphite Research Reactor, Passell and BNL scientist Robert Schermer established that neutrons of only one-spin orientation are absorbed by helium-3 nuclei, thus paving the way for the development of polarized helium-3 gas as a neutron polarizer and polarization analyzer, a technique now widely employed at neutron facilities throughout the world.

After receiving a Ph.D. in physics from UC Berkeley in 1955, Passell worked at the Lawrence Livermore Laboratory in Livermore, California, and at the Riso National Laboratory in Roskilde, Denmark. He came to BNL in 1963 as an associate physicist in the Physics Department, becoming a physicist in 1966, and a senior physicist in 1976. In 1998, he was the co-winner with BNL scientist John Larese of the U.S. Department of Energy’s Materials Science Award. He retired in 1995, but he continued his work on neutron-related projects as a guest senior physicist until 2007.

The NSSA honored Tranquada with the 2006 Sustained Research Prize in 2006 for “his outstanding neutron scattering studies of the charge and spin ordering in the high-temperature cuprates and related materials.” Winners of this prize and the other top NSSA award, the Shull Prize, automatically become NSSA Fellows, so Tranquada was named a fellow in 2007. For more information, see this issue of the BNL Bulletin (.pdf).