Overlapping campaigns, some with data already, try to unwind the puzzle of coastal deep convection 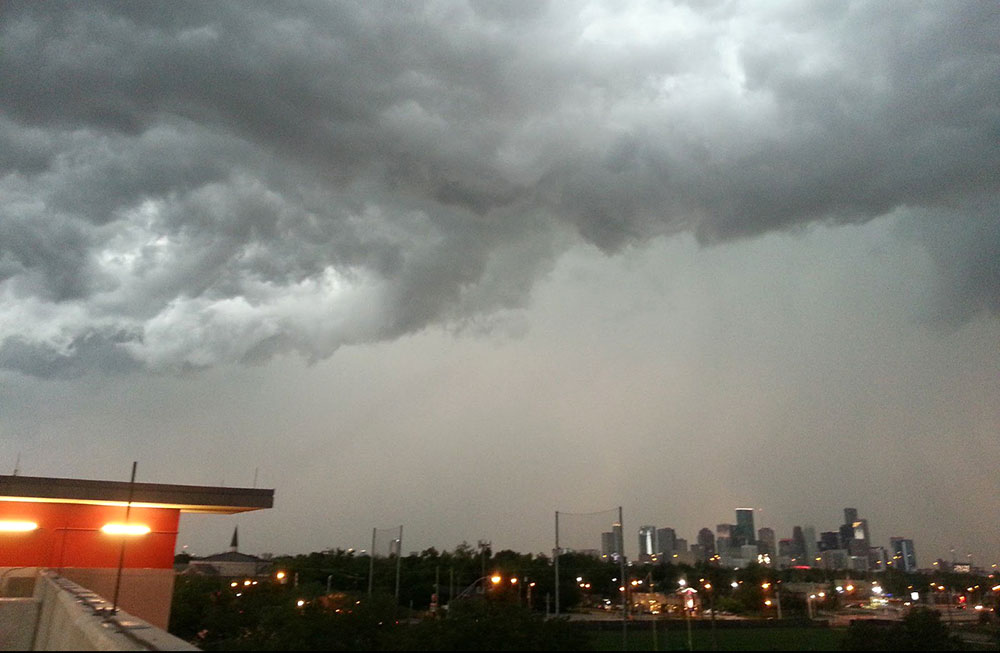 The cloud-gray Houston, Texas, skyline, right, is the backdrop for the 2021–2022 TRacking Aerosol Convection interactions ExpeRiment (TRACER). Photo is by Alex Kotsakis, now at ERT Inc.

It is hard enough to understand what influences weather, climate, and air quality. Clouds add complex uncertainties. So do aerosols, the ultrafine liquid and solid particles that make clouds possible. Aerosol sources, chemistry, and life spans are not often well known.

All of these factors become even harder to understand “in a complex urban coastal environment with significant pollution sources,” says Pavlos Kollias, an atmospheric scientist at Stony Brook University and Brookhaven National Laboratory in New York.

He and others offer an example: Houston, Texas. 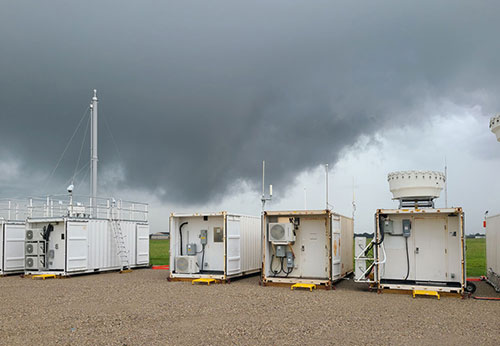 On October 1, 2021, the first official day of operations for TRACER, this ARM Mobile Facility in La Porte, Texas, recorded data on storm clouds and the surrounding environment. Photo is by David Oaks, Los Alamos National Laboratory.

This humid, subtropical city of 2.3 million inhabitants is where scientists are midway through a succession of multi-agency field campaigns studying the interactions of clouds, aerosols, air quality, and climate.

Several overlapping campaigns are running in the area from July 2021 through September 2022.

Nine authors, including Kollias, outline the details in a brief January 2022 article published early online by the Bulletin of the American Meteorological Society (BAMS).

The authors four of them affiliated with the U.S. Department of Energy (DOE) introduce their science partners, lay out timelines, and hint at progress. (Some data are already available.)

For TRACER, the first ARM Mobile Facility (AMF1) and its 60-plus instruments are based at an airport in La Porte, Texas, 25 minutes east of downtown Houston. It’s the first time ARM has deployed one of its mobile facilities in an urban coastal environment.

Joining TRACER is a NASA study called TRACER-AQ (AQ for “air quality”). An early starter among the campaigns, it deployed ground, air, and shipborne measurement platforms from July through September 2021. The TRACER-AQ mission is to map the distribution of aerosols, ozone, and ozone precursors.

A third major effort, led by Kollias, is called the Experiment of Sea Breeze Convection, Aerosols, Precipitation and Environment (ESCAPE). It is funded by the National Science Foundation (NSF) and will run during the spring and summer of 2022.

Houston weather is influenced by offshore winds called “sea breezes,” which can amplify the power of thunderstorms.

“We hope this (paper) serves as the first landing spot for people wanting to know more about the campaigns,” says the paper’s lead author and TRACER’s lead scientist, Michael P. “Mike” Jensen, a veteran atmospheric scientist at Brookhaven.

In the video above, Michael Jensen, TRACER's lead scientist, describes the science focus of the ARM field campaign. In addition, Jensen explains why the Houston area is a prime location for TRACER. Click on the video to learn more.

Houston is a good place to study the way aerosols, clouds, and precipitation interact which models do not always get right.

Houston is the urban center of a 10,000-square-mile metropolis of traffic, refineries, farmland, and breezy ocean coastline. To scientists, that’s an intriguing medley of atmospheric influences.

Houston is also marked by a diversity of aerosols, the tiny liquid and solid particles that make clouds and rain possible. Some are from pollution sources such as traffic and industry. Others are linked to relatively pristine rural or ocean environments.

TRACER was partly inspired by a model intercomparison project on convective storms done by members of the Aerosol, Cloud, Precipitation, and Climate (ACPC) working group. ACPC draws experts from all over the world, including Europe, Asia, Australia, and North and South America.

The project results were presented in an April 2021 paper led by Peter J. Marinescu of Colorado State University. (Five TRACER co-investigators were co-authors.)

The ACPC project was the first coordinated international intercomparison of models to assess how well they simulated the impacts of aerosols on deep convective clouds. It was based on an observational case of convective clouds in Houston from June 19 to 20, 2013. During that time, two regions of weak, scattered, isolated convective clouds grew and dissipated. However, a few localized areas of intense convection developed.

With this observational framework as a starting point, seven state-of-the-art models simulated scattered convective clouds near Houston. The focus was on measuring trends in cloud-updraft intensity and frequency. In what different ways would initial low and high cloud-condensation nuclei concentrations affect cloud updrafts?

The models shared some consistent results. But they also showed stark differences, especially in the variability of deep convective updrafts.

Together, TRACER and its companion campaigns “will help us improve what we know,” says Jensen, and dispel model uncertainties.

During TRACER-AQ, research flights were conducted aboard a Gulfstream V research aircraft flying out of NASA's Johnson Space Center in Houston. Photo is by Laura Judd, NASA Langley Research Center.

NASA’s TRACER-AQ got additional support from the Texas Commission on Environmental Quality (TCEQ) in the form of ground- and ship-based instruments. A near-shore pontoon boat and a deep-water ship, fitted with instruments and used to launch radiosondes, were deployed in the Gulf of Mexico.

TCEQ will provide similar support to TRACER during summer 2022.

The NASA campaign will update a conceptual model of Houston air quality, says TRACER-AQ co-lead scientist John T. Sullivan, who is based at the NASA Goddard Space Flight Center in Maryland.

That update will help link satellite measurements to earth science and public health. It will inform a planned NASA satellite mission called Tropospheric Emissions: Monitoring of Pollution (TEMPO), which has a January 2023 launch date.

Sullivan and TRACER-AQ co-lead scientist Laura M. Judd, who works at the NASA Langley Research Center in Virginia, are part of a 10-year NASA study of urban air quality. Results from Houston and elsewhere are designed, in part, to help satellite instruments capture patterns of urban pollution from space. 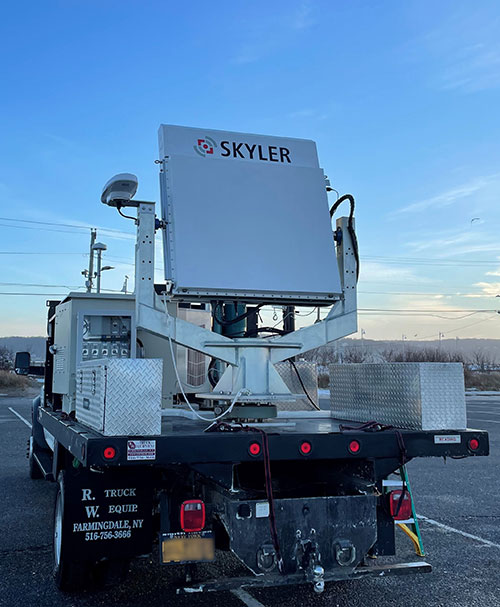 In the air, a “recipe” of instruments will pull data from above the highest clouds, says ESCAPE co-investigator Greg McFarquhar of the University of Oklahoma.

The campaign’s aim is to measure processes affecting cloud life cycles and the updrafts and downdrafts that influence aerosol concentrations.

Sea-breeze circulations generate many isolated convective storm cells, which scientists are eager to parse in detail.

During the latest annual meeting of the American Meteorological Society (AMS), in January 2022, Jensen pointed to some new capabilities being developed and tested for TRACER.

One still being tested is an automated radar system to track single convective storm cells. Jensen showed an animation of one such tracked cell. It pulsed toward Houston on January 8, 2022, pushing inland like a bead of mercury.

“We’re really excited about this first example,” says Jensen. “These data are not yet available, but (the test) shows how we hope to be able to track clouds.”

He and others on the TRACER science team also used the AMS meeting to deliver glimpses of data so far.

They touched on measurements of cloud frequency, including scant cloud cover in Houston in October and November 2021. They mentioned that December 2021 had plenty of clouds but anomalously little rain. (On average, convective clouds are present in Houston about half the year.)

Data on the way 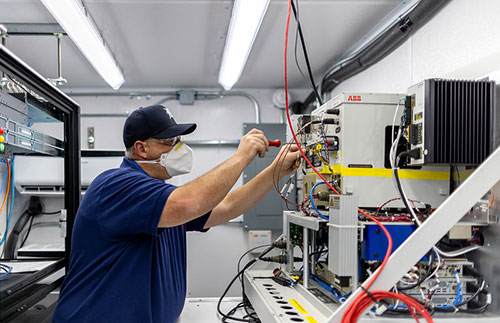 In September 2021 in La Porte, ARM technician David Oaks works on a TRACER instrument that measures vertical profiles of atmospheric temperature and humidity. Photo is by Ben Corda, University of Houston.

Measurements are typically ready to look at within 24 hours of being collected. Researchers can search for measurements by instrument, including scanning radars, particle counters, and precipitation gauges.

NASA’s TRACER-AQ data will be available later in 2022 at one of 13 NASA-supported Distributed Active Archive Centers.

“We’re still slowly gathering final data,” says Sullivan. All the data will arrive at one time, by spring.

TRACER-AQ data include measurements of nitrous oxide, ozone, and other pollutants from 10 flight days by NASA’s Gulfstream V research aircraft. The patterns from flight data will help calibrate TEMPO.

Measurements collected during ESCAPE will eventually be housed at the National Center for Atmospheric Research’s Earth Observing Laboratory in Colorado. 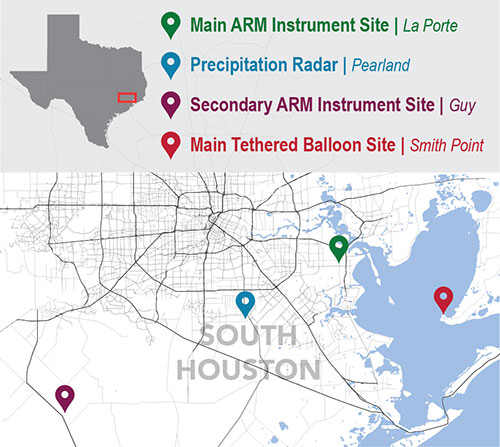 ARM will operate four instrument sites in the Houston area during the TRACER campaign. The main ARM instrument site in La Porte and a precipitation radar in Pearland are scheduled to run the full year. A satellite site in Guy and a tethered balloon site at Smith Point will operate from June through September 2022.

In large urban areas like Houston, researchers are also interested in how pollution affects the severity of thunderstorms and the amount of rainfall.

That means studying aerosols, which influence cloud formation and storms in ways scientists do not fully understand.

Some aerosols are linked to pollution from heavy traffic and industry. Other aerosols inhabit relatively clean air.

How do their influences on thunderstorms differ? One school of thought is that pollution intensifies storms and increases heavy rain. In the literature, the jury is still out.

As a bonus for co-located data, the small airport in La Porte already has a TCEQ-operated meteorological station and a National Weather Service observing system.

Easy access to power was another factor in choosing La Porte. So was a relatively clutter-free path for scanning cloud radars, which are subject to “beam blockage” from nearby infrastructure.

Radar – plus sites rural and breezy 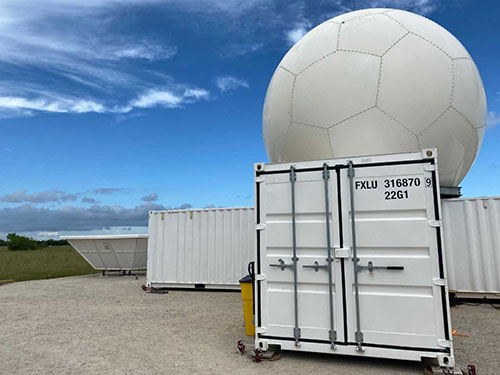 TRACER is the second deployment for the second-generation C-Band ARM Precipitation Radar. The radar started life with an ARM field campaign in Argentina and is now in Pearland, Texas, above. It can produce three-dimensional (3D) images of evolving convective systems. A radar wind profiler is visible to the left. Photo is by Jillian Sandoval, Los Alamos National Laboratory.

A site south of the Houston city center, in Pearland, Texas, hosts the C-Band Scanning ARM Precipitation Radar and a radar wind profiler.

Combining measurements from the C- and S-band radars will allow for dual-wavelength precipitation retrieval studies.

To the southwest is an “ancillary” site in rural Guy, Texas, which will operate for just the last four months of TRACER. Measurements in Guy will record relatively clean rural aerosols. Such aerosols are often initiated by soil, dusts, bits of plant matter, and sea spray.

Guy will provide ground-based measurements and radiosonde launches. In addition, it will serve as a site for ARM tethered-balloon launches. These rugged balloons, the size of SUVs and strung with instruments, collect atmospheric data while ascending, descending, or hovering at one altitude.

A tethered balloon will also fly at Smith Point, Texas, on the eastern shore of Galveston Bay. Its instruments will collect data on the effects of sea-breeze circulations initiating southeast of Houston.

Like Guy, Smith Point measurements will only take place June 1 to September 30, 2022, during a period of intensive measurement operations for TRACER.

DOE’s Atmospheric System Research (ASR) will fund a number of projects during the summer. (Look for an article about TRACER’s summertime intensive operational period, including the ASR-funded projects, in May 2022.)

“We will surely get some large storms,” says Jensen. “But it’s the number of storms particularly isolated storms that are of most interest.”