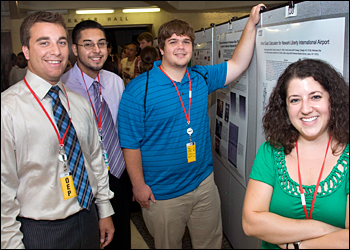 From left: SULI interns Nick Vita, Tim Kress, and Rich Jaworski stand by their poster with intern Sophie Bushwick, who wrote this article.

Travelers often want to know weather conditions before they embark on a voyage — and for airports, this information is vital to ensure passenger safety. In fact, Federal Aviation Administration (FAA) air traffic managers use weather forecasts from the National Weather Service (NWS) station in Upton to plan air traffic patterns.

“This is the first time the National Weather Service has done this project through the SULI program,” said Vita, a senior at Penn State University.

All three interns are majoring in meteorology, and their interest in weather forecasting led them to the NWS Forecast Office at Upton, and then to Brookhaven’s SULI program, funded by the Department of Energy and run by the Office of Educational Programs (OEP).

“At the OEP, we’re considered the wind guys,” Kress said.

Knowing about the wind — specifically, the probability of a wind gust under given conditions — is important for runway use at Newark Airport, where weather related air traffic delays result in millions of dollars per year in economic loss.

“We came up with a way to better forecast wind gusts so airports could prepare for it in advance,” explained Vita.

At first, Vita, Jaworski, entering his junior year at SUNY Oneonta, and Kress, a SUNY Oswego senior, focused on compiling and inputting climate data for viewing on the National Weather Service website. They had to sort through wind gust information collected every five minutes every day for 10 years — a task that took the first few weeks of their internships.

“Wind gust calculation is difficult to do,” Jaworski commented after describing this preliminary work.

Finally, the three interns worked together to complete a wind gust calculator capable of providing the probability of a wind gust under specific wind speeds and directions. Although only applicable to Newark Airport, the NWS will also use this calculator, and eventually revise it for other locations.

The “wind guys” all appreciated the chance to do real research.

“I haven’t had as much experience as the others,” said Jaworski, “so it was a good opportunity to participate in new research.”

In addition, SULI’s summer deliverables — a required abstract and poster — helped acclimate the students to presenting their research. “It helped me get a good idea of writing abstracts as well as hands-on research,” Kress said.

Another advantage of participating in SULI lies in the brown bag lunches hosted by Brookhaven’s OEP, where a variety of BNL researchers share their subjects of expertise with the summer interns.

As Vita said, “It was good to learn about the other research at Brookhaven.”

With this research experience under their belts, all three interns plan on careers in atmospheric science. Vita will also pursue a master’s degree in GIS.